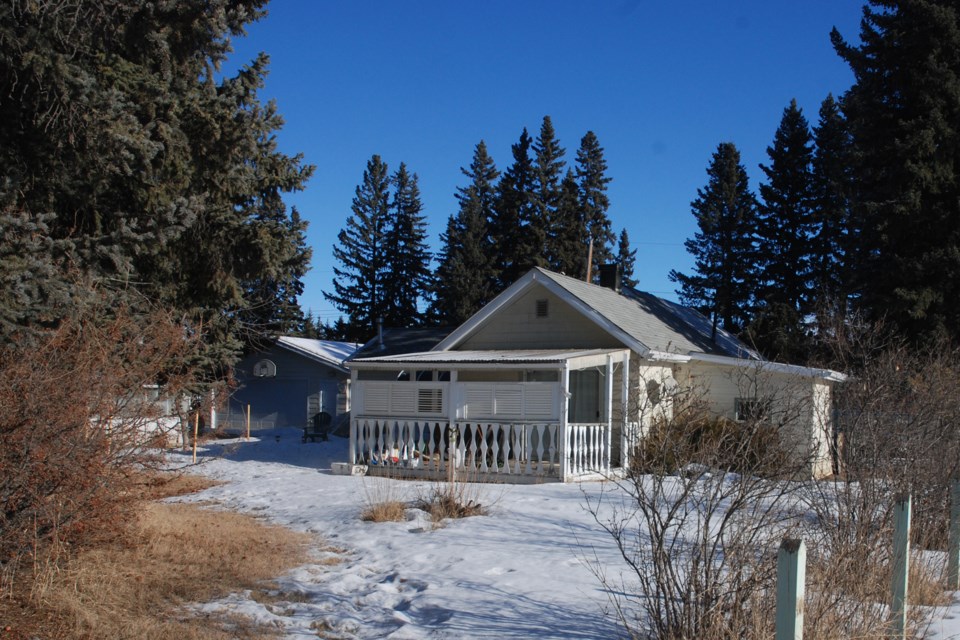 Corynn Wylie Sande and husband Ryan Sande, who own this property located just off of the Bergen Road, or Highway 760, are working toward establishing a counselling service with living accommodations on a second floor. Simon Ducatel/MVP Staff

SUNDRE — With council’s recent approval of an amendment to the land use district map, a local couple is one step closer to opening a counselling service.

The move came by way of motion during the regular Jan. 25 meeting followed by a public hearing, both conducted by teleconference after the legally required advertising period to adjacent landowners and the public for the proposed change to the parcel located at 136, 5th Street SE, near the Royal Canadian Legion Sundre Branch #23.

“The amendment before you this evening is specific to a non-conforming parcel of land in the flood plain industrial district that contains a residential structure,” Betty Ann Fountain, senior development officer and special projects coordinator, said during a briefing.

“The amendment is to re-designate the parcel from flood plain industrial, to highway commercial,” Fountain said.

Approval of the re-designation would permit the applicant to build a legal mixed-use building, she told council, adding the move would not change the zoning or regulations in the remainder of the area.

“To date, the town has not received any written objections to the amendment,” she said.

Further, she said the proposal aligns with the municipality’s development plan, which is committed to responsible growth management with the goal of preserving Sundre’s small town character while ensuring growth pressures are considered.

Concluding her presentation and opening the door for council discussion, Fountain said administration recommended the amendment be approved.

“When does the parking issue come into play — is that in the development permit (stage)?” Coun. Richard Warnock asked for clarification.

Fountain confirmed the matter of parking would be addressed during the development permit process.

“There will be requirements under mixed use for parking on the property, off-street parking,” she said.

Access to the site is anticipated to be from Allen Ave. SE — the street that runs eastward from Highway 760, which is commonly known locally as the Bergen Road — toward the legion’s parking lot, she said.

“There really wouldn’t be an impact to the Bergen Road,” she said.

Linda Nelson, chief administrative officer, proceeded to read into the record a letter submitted by the applicants, Ryan Sande and Corynn Wylie Sande, who have owned the property for 13 years. During that time, the couple has actively volunteered and become part of the community, where they intend to set roots for their careers. Corynn previously worked as a teacher at River Valley School for three years, and recently started to work at Sundre High School, where Ryan has since 2012 been employed as a family school wellness worker.

They “have dreams of developing their current lot into a space that could support a comfortable place to live, as well as secure a space for the couple to establish and grow their own counselling business,” Nelson read aloud.

The couple sees the project as beneficial to the community, as the development would provide greatly needed space to increase mental health support in the area.

Additionally, the secluded nature of the lot would provide a safe environment for clients to access private and confidential help, she said.

Their plans also include “hopes to support other local entrepreneurs through leasable commercial space that coincides with their counselling office.”

After Nelson finished reading the letter, Sande, who had joined the teleconference, reiterated the hopes outlined in the couple’s co-written letter, and said they look forward to continue developing their careers as well as contributing to the community as they have done since moving to town.

Without anyone speaking opposed to the bylaw amendment, Fountain presented a closing statement, concluding the project — which upon pending approval of the development and building permits would involve the demolition of the existing non-conforming residential structure on the parcel with a new conforming, two-story mixed used building — fits with the intentions outlined in the municipal development plan that was approved in 2013.

Following the public hearing, council later during the regular meeting carried second and third readings for the bylaw amendment.