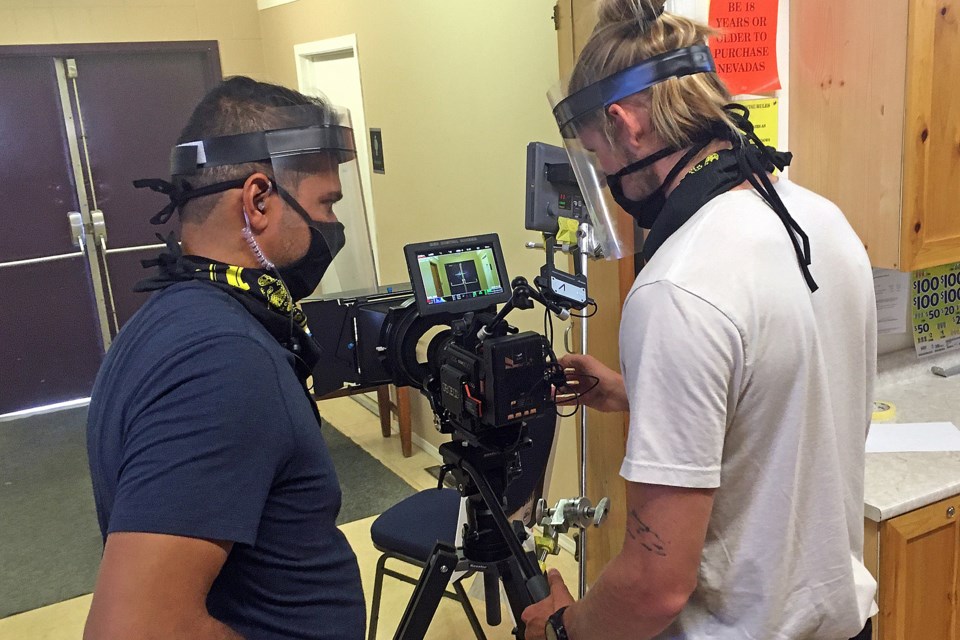 Edmonton-based filmmaker Raoul Bhatt, left, the director of Pipe Nation, coordinates with a cameraman to frame a shot on Sunday, Aug. 16 at the Sundre Elks Lodge No. 338 during the first day of production. Simon Ducatel/MVP Staff
SUNDRE — The creative mind behind the new, independently-produced show Pipe Nation wants to provide a private screening for the community.

“December is when we’ll have the full polished product, and then we’ll hold a private screening for the town,” said Edmonton-based filmmaker Raoul Bhatt during an interview with The Albertan following the first day of production in mid-August.

“Depending on how COVID-19 is during that time, we may do a drive-in. We just can’t think of any other way because we don’t want to put people in a theatre,” said Bhatt.

“But I’d really love to showcase it here first, and then take it around the province,” he said, adding he hopes to organize an event during the holiday season but that plans are not yet finalized.

Production for the series, a fictional story about the real adversity endured by oilpatch workers and their families in a rural Alberta town, wrapped up Aug. 24.

Dozens of extras were at the Sundre Elks Lodge No. 338 on the first day, bringing with them beaming enthusiasm for the project, said Bhatt.

“We got a lot of good feedback from the background actors,” he said.

“They loved it, they had a blast. They hung out all day.”

Even though he offered them the option to take a break and go home if they wanted, the extras — including many locals — preferred to stick around, he said.

“No one wanted to leave. So, it was a nice feeling to have,” he said, adding they also respected the safety regulations.

“They couldn’t believe how stringent we were with COVID-19 and the protection of everybody and the safety — they just appreciated all of that, and it wasn’t just for show. We were pretty strict,” he said.

“The message of, ‘If you don’t do it, we all lose our jobs’ — I think they all understood and were very supportive, and they all stuck around all day…it was a great experience, I think it really showcases the future of film in Alberta.”

Despite a few critics, most people he’s heard from seem to be getting behind Pipe Nation, he said.

Although pandemic protocols slowed down the production process, the show must go on, and Bhatt seemed pleased with the progress made following the first day of shooting.

“Very smooth — we met our schedule…we got what we needed,” he said when asked how things went, recognizing more time was needed than under normal circumstances in order to accommodate safety procedures.

“I could have got it done maybe about three hours sooner. But safety is number one — I don’t care if it takes me an extra three days. As long as everyone’s health is good, that’s what matters the most,” he said.

“We keep it pretty stringent in order to meet deadlines and we don’t drag into overtime or late into the night and put people’s health on the line.”

Post-production is expected to be underway after August, he said.

“We already have an editing team on location,” he said, adding a rough cut is being put together as they go.

Until the series is picked up by a streaming platform, private screenings will be the only option to present the production to people, he said.

“I’m very confident it’ll get picked up,” he added.

“We’ve had four other streaming giants reach out to us since the media broke.”

His top priority, however, is to protect the interests of the cast and crew. So, he’s not interested in considering just the highest bidder, but also the best deal that will provide the most suitable outcome for his team.

“If we do get the right distributor, we’ll have a good three years of work for 200 people, and at good salaries.”

Securing a distributor in turn will enable the production to proceed on completing the first season next spring, and then continue with two more seasons that will have a platform for public viewing.

“I’ll be brave and go up against a dragon, which that’s what these guys are,” he said about the global streaming behemoths.