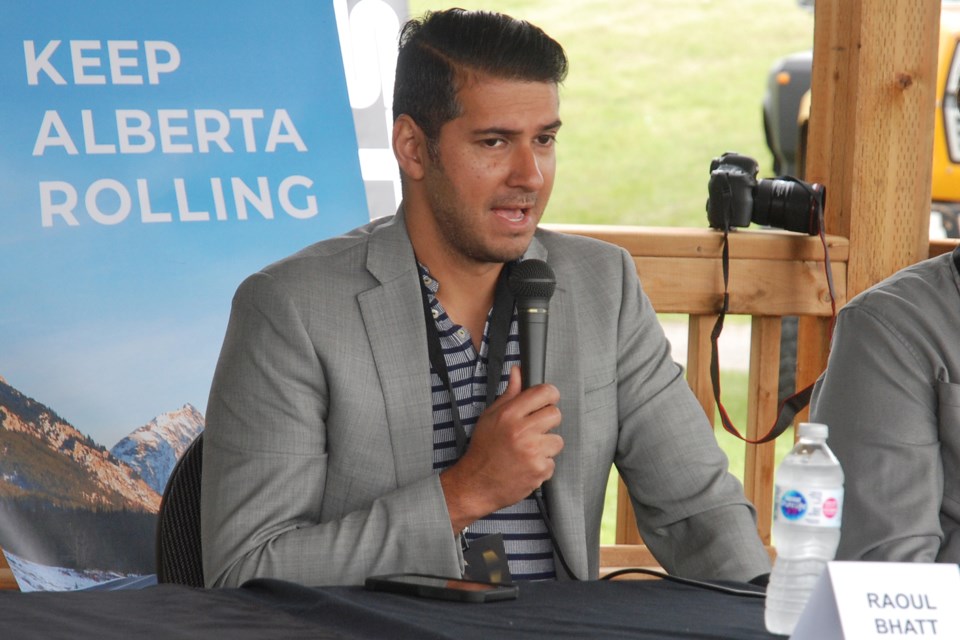 SUNDRE — Although Pipe Nation strives to tell an honest and compelling story about the struggles oilpatch workers face, the new independently-produced show to be filmed in and around town in no way, shape or form glorifies or celebrates drug culture confirms its filmmaker.

During the recent press conference and extras casting call that was hosted at the Greenwood Community Gazebo and attended by more than 400 people, Edmonton-based filmmaker Raoul Bhatt had described the new series as a combination of award-winning hits Sons of Anarchy, Ozark, and Breaking Bad, featuring sex, drugs and drama.

Bhatt’s comments created some online and social media backlash from people who were not shy about expressing their displeasure with expletive-laden messages.

“You completely missed the point. From western Canadian pipeliners, go (f***) yourselves! I hope you go tits up, we don’t need to be represented like this,” reads a message from someone who runs a Facebook group and one of numerous messages Bhatt received in the fallout from the press conference’s media coverage.

However, while drugs are indeed a small part of the story, Pipe Nation is not intended to be about celebrating drug culture, he said.

“Breaking Bad’s not even about that. It’s about this man’s desperation to support his family. So he does what it takes — same with this story,” he said.

“This woman (Pipe Nation’s lead character) is doing what it takes to support her family and to survive, and dealing with all kinds of drama that goes with it,” he said.

During the press conference, Bhatt explained that Pipe Nation takes place in the fictional town of Hardwell, which will be portrayed by Sundre, and will offer a glimpse into the real struggles and compelling stories faced by families and people who work in Alberta’s oilpatch.

Bhatt added that during the press conference he should have disclosed that, “We are a dramatized series staged in the beautiful Rocky Mountains, and showing the colourful people of the energy sector.”

He said the show’s objective is to present a variety of perspectives: “the positive side, the darker side, and the human side.”

Some people, he continued, are straight shooters who could never do wrong, while others are all about “the strippers and blow,” he said, calling that “the reality of any industry.”

At its core, he said Pipe Nation is more than anything else about “overcoming adversity. And it’s about camaraderie, friendship and family.”

Bhatt welcomed the feedback as an opportunity to create a greater conversation and generate interest in the series.

“My job, as an artist, is to create discussion, and to provoke thought. That’s what it’s really about.”

Despite a vocal minority expressing their concerns, the majority of people he’s heard from have been very supportive, he said.

“Congrats on the new show! If you need any equipment to help with filming, I have hydrovacs, combo vacs, tank trucks, pressure trucks, water trucks. Thx! (sic)” reads one such message.

The backlash was largely coming from a “small percentage” of people, said Bhatt.

“But most are supporting us. So many people want to be involved,” he said.

Calling the experience an eye-opener, he said he understands where people with concerns are coming from.

He stressed the series is not about celebrating drug culture, but rather recognizing that it does exist in an effort to portray an honest and more relatable story with teachable moments and the struggles some people face with addiction.

“It’s got to be relatable. If not, it would be a propaganda machine, which isn’t what I want.”

When Bhatt spoke with The Albertan on July 15, he said rehearsals were getting underway and that the crew would be reaching out the following week to some of the extras who were selected to book them for the shoot lined up later in August.