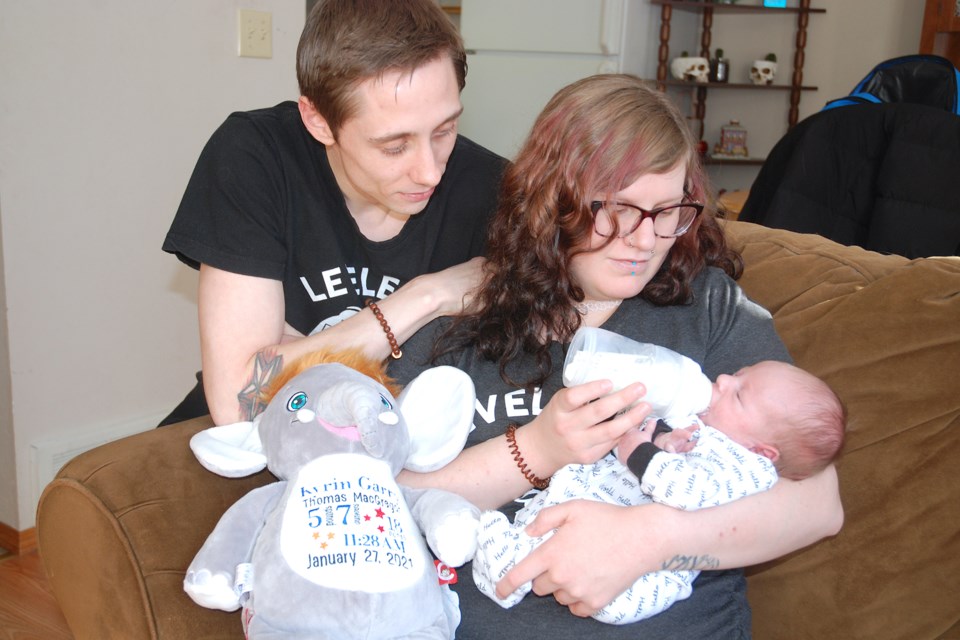 SUNDRE — Although originally anticipating they would be delivering their baby in Olds, a local couple quickly found those plans changing when the newborn suddenly started to arrive much sooner than initially expected.

“It was just a shock that he came so early,” said first-time mother Alannah Horsfield.

The 25-year-old Sundre resident said during a phone interview that the original due date was Feb. 23.

Despite the early exit, Horsfield said he was born without any serious complications following a labour that didn’t even last two hours, tipping the scale at only five pounds and seven ounces.

“Everything seemed fine. I actually didn’t know I was in labour, so it was quite the surprise for us,” she said.

Accompanied by husband and longtime Sundre resident Tyler MacGregor, 27, she said they had decided to drop by the Sundre hospital just to check and see how things were.

That was when the health-care team, under the couple’s physician Dr. Jonathan Sommerville, discovered she was in labour.

“They were surprised,” she said. “Once they said the baby was coming, I think it was like an hour and half and he was here."

There would not have been enough time to drive to Olds without most likely ending up delivering him along the way, she said.

The couple praised and expressed gratitude for Sommerville's expertise and bedside manner.

Considered a “late preemie,” Kyrin Garry Thomas MacGregor — whose middle names were chosen in honour of his great grandfathers — remained in hospital under observation with his mom for five days.

“On the third day, they put him under the biliblanket,” she said.

A biliblanket is a portable phototherapy device used to treat jaundice in late preterm newborns.

The family has since then comfortably resettled at home, and MacGregor said Kyrin rapidly gained weight, having as of early last week already put on a couple of additional pounds.

Kyrin’s name was chosen along similar lines of a name the couple had picked in the event the baby was a girl: Kaida.

Asked whether they perhaps have plans to have another child, Horsfield said that would be a bridge to cross another time.

“We might. But right now, definitely holding off,” she said.

The auxiliary has since the facility opened more than 50 years ago endeavoured to provide a welcome package including gift cards to local business for the parents of the first baby born at the local hospital.

Another baby born earlier this year had also set a new milestone by being the first infant delivered at home to be recognized by the auxiliary.