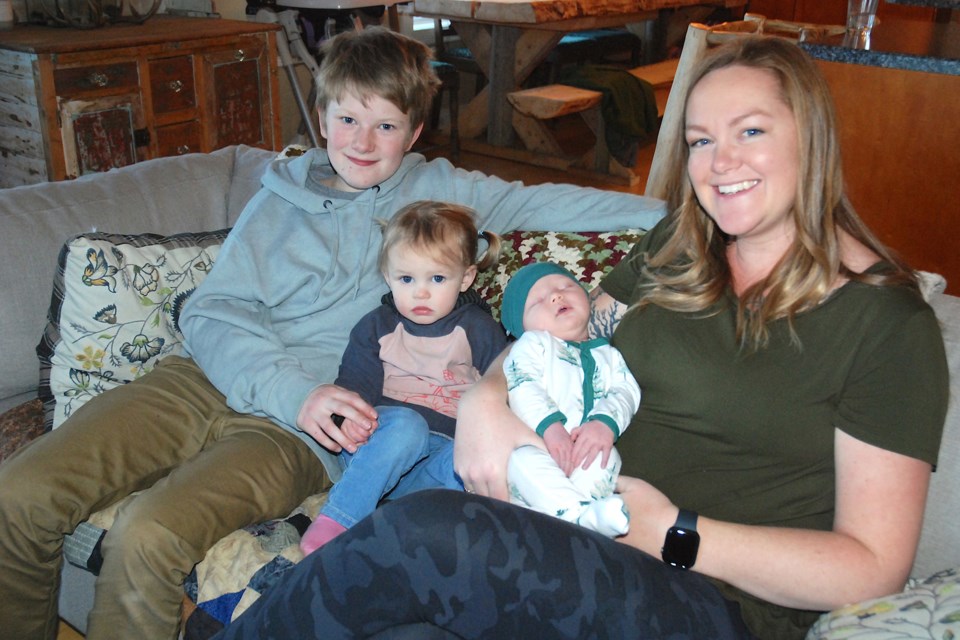 Cradled in the arms of her mother Dansya Curry, Sundre's New Year's baby Emerson arrived into the world on Jan. 4 at the family home located northeast of town. She joins her siblings Rowyn, 1, and Finn, 11. Dad Denis Arsenault, who was there to welcome his daughter, was at the time the photo was taken back at work in the oilpatch after many months in a pandemic-induced hiatus. Simon Ducatel/MVP Staff

SUNDRE — The area’s 2021 New Year’s baby set something of a new milestone.

“This is the first time there’s ever been a baby born at home for the New Year’s,” said Vi Ellithorpe, president of the Sundre Hospital Auxiliary Society, which for years has provided a package that includes a variety of gift cards for local businesses to the parents of the first child born in the area.

The local New Year’s baby has traditionally always been delivered at the Sundre hospital since the facility opened more than 50 years ago, she said.

But Emerson Curry, who was born just a few days after her due date on Jan. 4 at 2:45 p.m. weighing in at a whopping nine pounds and three ounces, was welcomed into the world from the comfort of her parents’ home located northeast of town.

A patient of Sundre's Dr. Jonathan Somerville with the provision of care from a couple of midwives based out of Rocky Mountain House at West Country Midwives, mom Dansya Curry said, “This time was great. Everything kind of happened pretty easily.”

This was not her first experience with home delivery, which she prefers over going to a hospital.

Her eldest, Finn, who is now 11, was also born at home with help from midwives when she lived in Cochrane. He weighed a modest seven and a half pounds.

And while she initially intended to have her second child — Rowyn, who is now a year and a half — also delivered at home, Curry said those plans changed when she had to be induced after missing the due date by more than two weeks, which required going to the Rockyview General Hospital in Calgary. Her second child tipped the scale at nearly nine pounds, weighing in at eight pounds and 15 ounces.

Asked why she decided to opt for a home delivery as opposed to a hospital maternity ward, Curry, originally from Ontario, replied candidly, “Me and all my siblings were born at home with midwives back when it was still technically illegal. I kind of like the idea of being home and having a natural birth. I feel like you have more of a say, and more control over how you want things to go.”

In this latest instance, the stars all seemed to align perfectly.

Denis Arsenault, her partner and the father of Rowyn and Emerson — as well as Ada, four, a daughter from a previous relationship who occasionally visits but lives with her mom in Sparwood — was among the many Albertans facing joblessness since the early days of the COVID-19 pandemic last March.

But even though Arsenault was finally scheduled to return to work in the oil patch for a three-week stint starting on Jan. 4, the same day Emerson was born, the job ended up being delayed, said Curry.

“Thank goodness he was able to be here for the labour, and be here for a few days after she was born as well to kind of hang out with her before he left for work,” she said. “So, we were quite happy.”

On the day Emerson was born, everything went about as well as could be hoped. Curry started experiencing contractions at around 8 a.m., and about an hour later called the midwife team to inform them she was going into labour. They arrived roughly another hour afterwards, she said.

“I just sort of walked around the house and did my thing — breathed through all my contractions,” she said.

“About an hour before she was born, they told me that I could go into the tub at that point because it was getting a little more intense and they could just tell that I was progressing and I’d probably be ready to push soon.”

Shortly after stepping into the bath, her water broke and she pushed for about half an hour until Emerson was born.

“My younger sister was there, and she caught her,” said Curry, adding dad then cut the cord.

Finn had at the time been delivered in an inflatable birthing pool, but “this time, in this house, we have a big bathroom and a big soaker tub,” she said, expressing a preference for a water birth.

“It makes the labour a little bit easier — it kind of relaxes you at the end,” she said, adding, “It’s a little less traumatizing for the baby when they come out.”

After developing in a womb filled with amniotic fluid for nine months, being born in a bath makes for an “easier transition for them to come out into the world when they’re still in warm water,” she said.

Although she would “absolutely” recommend water birth, Curry said what matters most is picking an option that puts an expecting mother at ease.

“I always say that I think it’s important for people to be where they’re comfortable,” she said.

“If somebody’s more comfortable in a hospital, then I think it’s important for them to be in the hospital. Because I think any sort of stress when you’re in labour, if you’re scared, that’s not a good thing.”

For some, she said that might also mean requesting an epidural — a pain killer injected directly into the spine. But that wasn’t for her, she said.

“I think it’s scarier to get a needle in the back, than it is to deal with the pain of labour," she said.

While the couple had been considering the possibility of having another child together, Curry said Emerson came as a pleasant yet completely unexpected surprise.

“This is kind of a little COVID whoops,” she said with a light laugh. “We were planning on having another one, but maybe not so soon after (Rowyn)”

Emerson joins the ranks of a new baby boom triggered by the pandemic.

“I think it’s going to be a big thing," said Curry.

“Lots of people sitting at home,” she said, leaving the rest to the imagination.