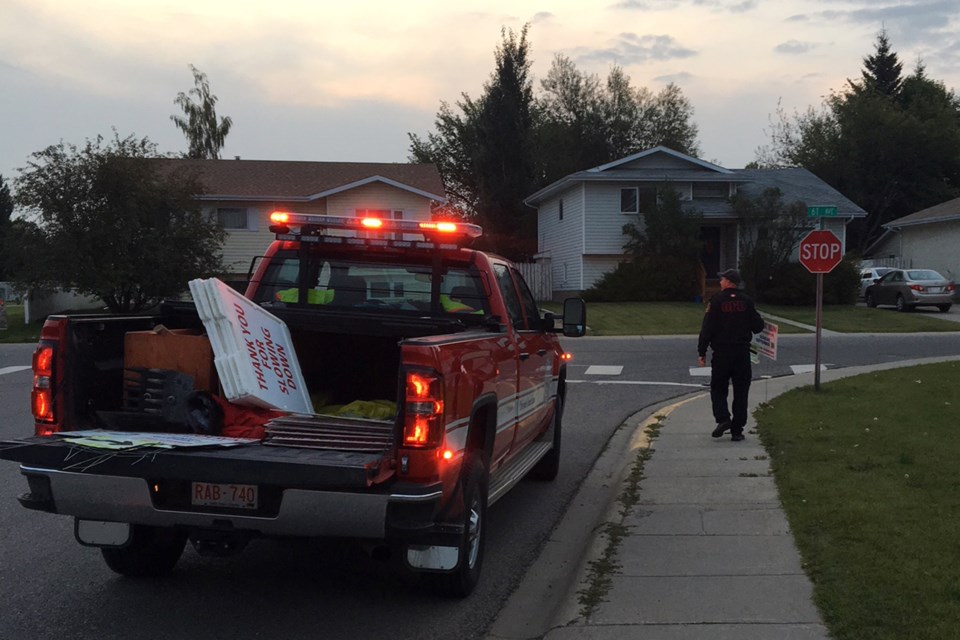 Olds Terry Fox Run organizer Noel D'Arcy marks out the route through town. As of Sept. 21, $2,225 had been raised online for cancer research from Olds residents. D'Arcy expects to accumulate more donations as they're dropped off at the fire hall in the coming days. Submitted photo

OLDS — Although COVID-19 protocols made things different this year, Noel D’Arcy, organizer of the Terry Fox Run in Olds, considers it to be have been a success.

The run, which raises money across Canada for cancer research, was held Sept. 20.

D’Arcy said as of the morning of Sept. 21, the Olds run, which was held virtually and through town, had raised a total of at $2,225 online.

He expects that figure to rise as more donations and pledge sheets come into the fire hall over the next while.

D’Arcy said the combination of virtual runs and the run through town, plus the fact that people could run at times that suited them seemed to enable people to follow social distancing guidelines and avoid mass gatherings.

“I heard from many people that got out and ran throughout the day,” D’Arcy wrote in an email.

D’Arcy said the workload to operate and organize the run was much smaller this year, because of the lack of post-run activities like the annual barbecue.

“That said, I think people enjoy the spectacle of running with a group of people in our community and the social aspect,” he wrote, adding he’s hopeful that next year, the run can return to its old mass start format with a couple of courses laid out through town.

“All in all, the 40th anniversary was a big deal for the Terry Fox Foundation,” D’Arcy wrote.

“I think we made the best of the situation.”

D’Arcy praised the “resilience of the members of our community” adding “they shone through to raise funds for cancer research.”