Two Olds High School (OHS) Grade 11 students who attended a presentation on peace agree with speaker Paul Chappell who argued promoting peace should be a greater part of the school curriculum. Chappell, 38, a former U.S.
Nov 28, 2018 9:28 AM By: Doug Collie 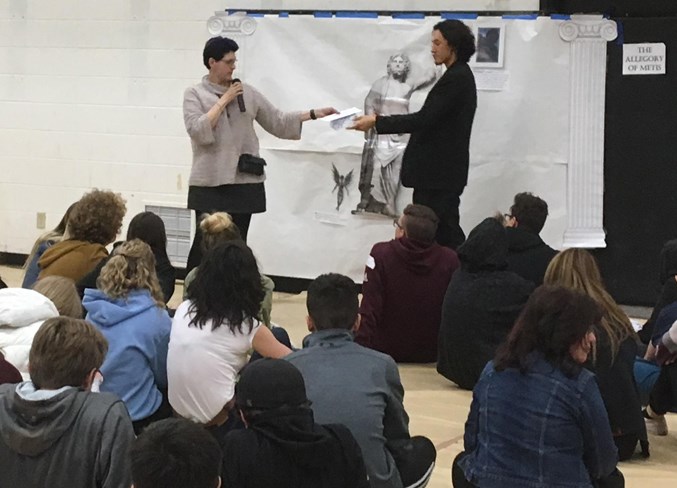 Nuclear Peace Foundation team member Susan Radford, left, provides a cut-out to speaker Paul Chappell as he builds an image on the paper behind them.

Two Olds High School (OHS) Grade 11 students who attended a presentation on peace agree with speaker Paul Chappell who argued promoting peace should be a greater part of the school curriculum.

Chappell, 38, a former U.S. army captain who served a year in Iraq, made that point in a talk at the Frank Grisdale Hall gym before a group of OHS students Nov. 19.

Chappell quit the army in 2009 and is now a peace literacy director for the Nuclear Age Peace Foundation.

Indy Feswick and Bella Cranston were impressed with his message.

"I thought it was really interesting because it is actually something that I thought of before. We're taught all these subjects. It's kind of like standard — go to college and get a job or whatever — but we're not necessarily taught all these things that you would just use in everyday life," Cranston said.

"He talked a lot about empathy. Like, if someone's being aggressive toward you, you don't personalize it and look more (at) what's causing them to act that way so you can kind of understand where they're coming from.

"Instead of getting mad or getting even more aggressive back at them, then you can just kind of get them help if they need it, or just talk to them. See if they're going through something maybe that they need just someone to be there and listen to them," she added.

"Another point that I thought was really interesting was how he was saying that we teach kids not to fight in kindergarten.

"We teach them different ways to express their feelings — you talk about your feelings — and then as you grow up, less time is spent on those coping mechanisms for when you have negative emotions," she said.

"We're all going to deal with anger and we're all going to get frustrated and the higher the grade, the higher your education is in regard to math and science and social and languages such as French and English, the less emphasis is placed on actually getting along with your classmates."

OHS educational assistant Bev Toews said similar events have been held at the high school for about 10 years, but this was the first year Chappell had given a presentation there.

Toews said funding for the presentation was obtained from the Town of Olds, Mountain View County, FCSS, and EQUS, the utility company.