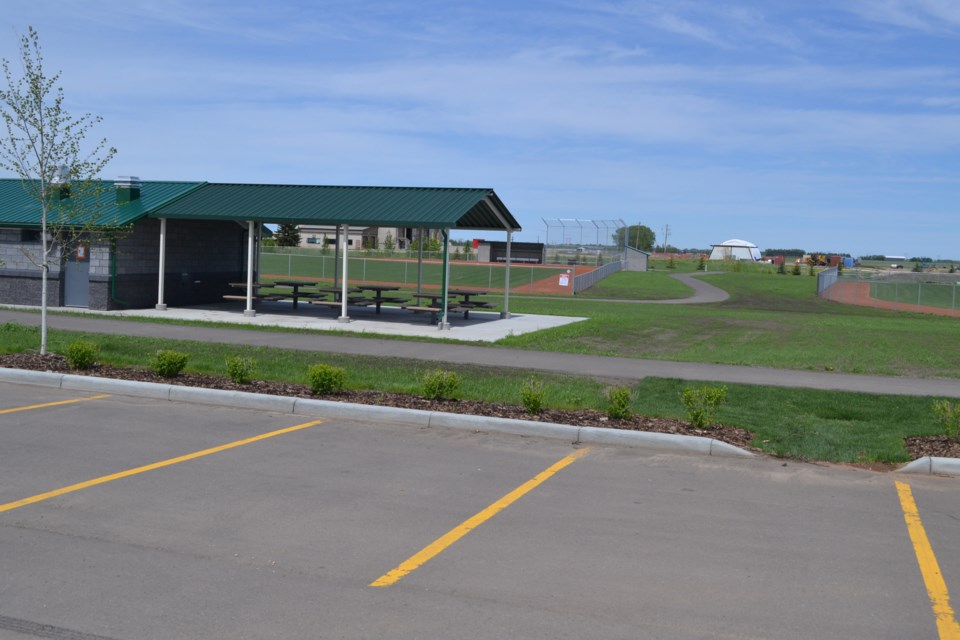 A look at Rotary Athletic Park from the parking lot toward a couple of the ball diamonds. Doug Collie/MVP Staff

OLDS — A “soft opening” of the Rotary Athletic Park of Olds has been created – a seven-minute video, slated to appear on the town’s website and social media.

It was unveiled during the Sept. 8 Olds council policies and priorities meeting.

The approximately $3.6-million park, located along 70th Avenue, just north of the Cornerstone shopping development, contains soccer pitches baseball and softball diamonds, horseshoe pitches and a walking path that at one point runs along a creek.

People began utilizing it this year.

Community services director Doug Wagstaff told council the plan had been to officially open the park earlier this spring, but the COVID-19 outbreak quashed those plans.

Hence creation of the video, with the hope a grand opening can be held some time next year.

“With the uncertain times this summer we didn’t know exactly how we were going to be able to celebrate this opening,” Wagstaff said.

“But we did know that we wanted to acknowledge all the number of contributors who made this dream a reality.”

“I just wanted to say thank you – a huge thank you – particularly to the Rotary Club of Olds,” Cooper said in the video.

“This park wouldn’t have been possible without the community members of Olds – not just the Rotary Club, but each and every one of you.

“Whether you donated five bucks or thousands of dollars, your contribution has made a big difference in making this day possible.”

The Alberta government gave $100,000 towards the creation of the facility.

On behalf of the government, Cooper thanked all those who donated to the park to make it a reality.

Muzychka noted that in 2016 the Town of Olds announced an injection of $3 million towards the creation of the new athletic park.

Residents were asked to contribute toward enhancements like bleachers. They ended up donating more than $1 million.

Mountain View County officials said they’d match what was raised and did so.

“Thank you very much to the people of Olds and Mountain View County. Without this, the Rotary Athletic Park of Olds would not be the beautiful place that it is.

I hope you enjoy it for many, many years to come,” Muzychka said.

Beattie echoed that thought and reiterated some of the fundraising history.

“On behalf of all the residents who contributed to this park, welcome, and I think this will be a fantastic facility, not only for Olds and the district, but the entire province,” he said.

“On behalf of all Rotarians, we are so honored and privileged to be part of this beautiful park,” Barzey said. “We welcome all of you to come out to this park. Enjoy it.”

In the video, several park utilizers and local residents can be heard saying thank you to those who made its creation possible.

After the video ended, several councillors said it should thank the citizens of Olds for their contribution because their tax dollars were utilized to help fund the park.

Wagstaff said Mountain View County, the Town of Olds and Alberta government are acknowledged for their help in the video’s credits.

He also noted that a slide comes up in the middle of the video thanking non-governmental groups and individuals who donated to it.

In the video, Muzychka said the decision to create the park goes back to the 2019 version of the town’s master plan.

However, deputy mayor Mary Jane Harper pointed out that decision goes back to at least the 2009 version of the master plan, if not earlier.

“I was given a script and I read it,” Muzychka said during the discussion.

That prompted a light laugh.

Wagstaff said corrections to the video could be made quickly.