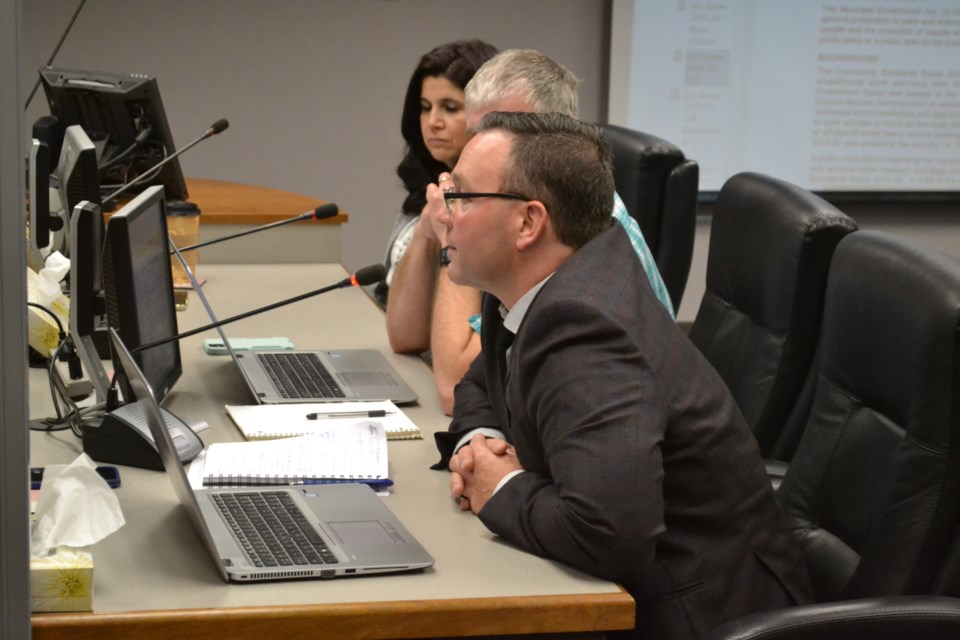 OLDS — Council passed a couple of bylaws during its Jan. 27 meeting that revise how the town controls and regulates dogs and businesses that deal with them.

Council began working on those changes to its community standards and land use bylaws last summer after four dogs got loose from a dog breeder’s yard and killed another dog in its own kennel.

A public hearing was held to give residents a chance to provide input pro or con, but although the gallery in the council chambers was pretty full, no one spoke up.

Under the community standards bylaw, households in town are not allowed to keep more than three dogs.

Also, dog owners are required to ensure their dogs don’t chase “a motor vehicle or other vehicle.”

Initially, that provision also said dogs were not allowed to chase another animal.

Coun. Heather Ryan, who runs a small home-based dog boarding/sitting business, expressed concern about that, saying dogs often get out of homes or yards despite their owners’ best efforts and have no intention of hurting or threatening anyone; they’re just excited and happy to greet other animals or people.

So she suggested the words “in a threatening manner” be added to that provision.

“It makes me kind of uncomfortable not to have ‘in a threatening manner,’ because you know, it gives an opening for somebody who maybe doesn’t like you to charge you or to make some kind of complaint against you, just because they don’t like you,” she said.

However, community services director Doug Wagstaff pointed out a provision to deal with dogs perceived to be “threatening” was already in the bylaw elsewhere. So after some discussion, council revised it to focus on dogs chasing bicycles or vehicles.

Council also passed a revised land use bylaw to address concerns about the breeding of dogs or operating dog kennels in residential areas.

The changes call for such operations to be located in light industrial, heavy industrial and industrial business districts, giving council discretion to decide where.

Another change creates an animal services category that allows animals to be boarded for less than 48 consecutive hours.

Director of operations Scott Chant said the category is to accommodate businesses that look after dogs during the day or provide services such as dog walking.

A kennel category allows for dogs to be boarded for longer than 48 hours but in those cases, those businesses would have to be located in an industrial district.

A summary of changes to the land use bylaw notes that “any changes to the rules and regulations do not apply retroactively. The existing approvals would be considered non-conforming uses.”

“So if they have an approval to have either more than three animals on site or – 48 hours, they can continue operating that way. This will only impact new applications as they come up,” Natasha Wright of Parkland Community Planning Services told council.

When council began discussing the proposed changes to the land use bylaw, Ryan recused herself and left the room, due to the fact she runs her dog business.

Mayor Mike Muzychka and Coun. Mary Jane Harper thanked Wright and town staff for all their hard work to alter the bylaws.

“We’ve encapsulated this and closed a bunch of loopholes that were in our bylaws,” Muzychka said.

Last year, some councillors and town officials were speculating that the town might create a separate bylaw which would deal specifically with dogs and other animals.

However, in an interview, Muzychka said council decided against that.

But he didn’t rule out creating such a bylaw in the future if necessary.

He was asked if council is now finished making changes to bylaws regarding dogs or other animals in town.

“There’s never the end,” he said with a laugh. “Situations may arise and we find that it’s inadequate or needs to be changed and times change. So every policy and bylaw we have is basically a living document. It can be revisited at any time due to necessity.”

Speaker brings legislature's mace to Olds
Feb 25, 2020 6:20 AM
Comments
We welcome your feedback and encourage you to share your thoughts on this story. We ask that you be respectful of others and their points of view, refrain from personal attacks and stay on topic. To learn about our commenting policies and how we moderate, please read our Community Guidelines.