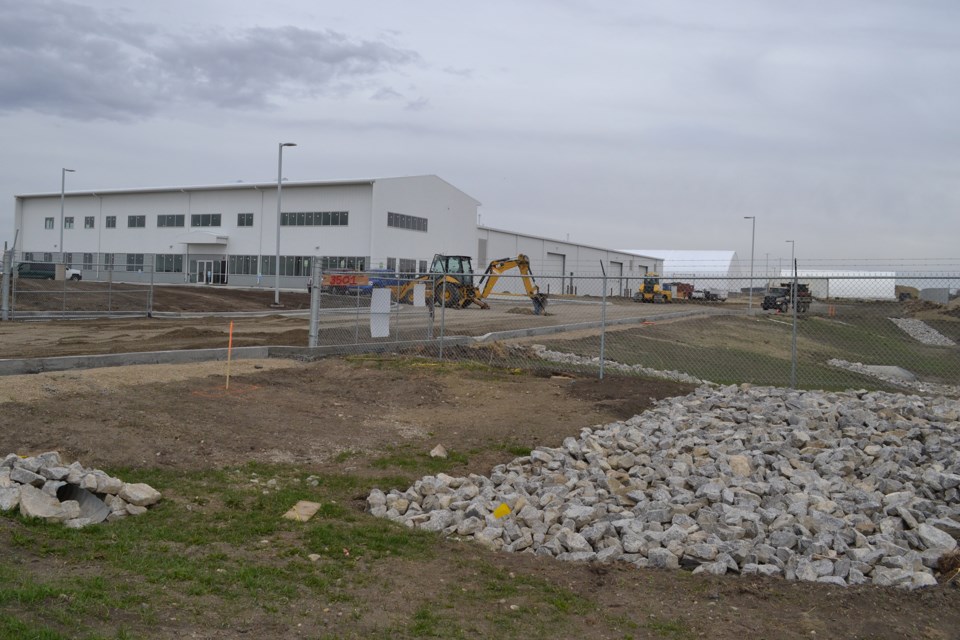 Workers were undertaking landscaping in the parking lot and treed areas around the new Operations Centre on May 7. Doug Collie/MVP Staff

OLDS — Employees are expected to begin moving into the town’s new Operations Centre over the next week or two now that its construction has been completed, operations director Scott Chant says.

Construction of the $10 million facility, located along 70th Avenue near the Rotary Athletic Park, began just under a year ago.

Council was told the building was completed on budget.

It consolidates staff and equipment from three other town-owned buildings into one.

The building is located on land where the town’s wastewater treatment plant used to be before the town became part of the South Red Deer Regional Wastewater Commission.

The facility has been controversial because the town increased its debt limit in order to obtain debentures to help cover the construction cost.

The town has said it plans to "dispose" of the three older buildings that previously housed operations staff and equipment.

During town council’s May 3 policies and priorities meeting, Chant said staff are expected to begin moving into the Operations Centre as early as this week.

“Our staff are anxious to get out there as well, so we’re looking as quick as we can start moving stuff across logically, we will.”

In fact, Chant said some equipment has already been moved there.

“Everybody actually started moving some stuff out there. They're putting it out of the way. And they’re also packaging up other stuff as we speak and putting it on pallets and wrapping it,” he said.

On-site project manager Andrew Simpson said all that remains to be done is some landscaping and gravel work, which he predicted would be done over the next couple of weeks.

“Otherwise, the project is complete, the building is ready to go,” he said.

Chant thanked Simpson for updating council on the progress of the project throughout its construction.