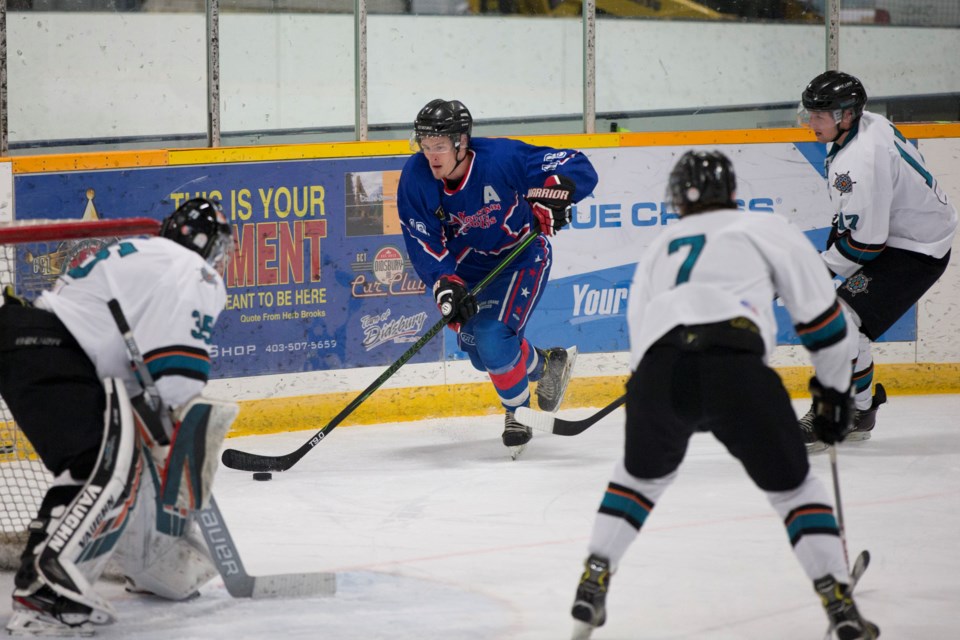 Mountain View Colts player Erran Thompson skates along the boards during the Colts' game against the Sylvan Lake Wranglers at the Didsbury Memorial Arena on Jan. 3. The Colts won 4-3. Noel West/MVP Staff

DIDSBURY - The Mountain View Colts started off 2020 on the right note.

After struggling through much of November and December, the fourth-place Colts beat Sylvan Lake 4-2 at the Didsbury Memorial Complex on Jan. 4 in their first game back after the winter break.

Mountain View started the game with three unanswered goals from Tage Fawns, Zane Leatherdale and Corbin Houchin all in the first period.

The Wranglers fought back with a pair of their own – by Payton Wright and Kien Brown – in the second to cut the Colts' lead to one.

However, the Colts held on and got the win with an insurance marker from Mitchell Visser in the third.

"That was a great game for us," said Gette. "Probably one of the best games for us this season. We all had a good work ethic. We did a good job backchecking and shutting them down offensively. I think they only got eight shots the whole game. It was a great team effort."

Also over the weekend six Colts as well as the coaches got to participate in the annual Heritage League all-star and prospects game, which took place Sunday in Medicine Hat.

Gette, who was attending his second all-star weekend, said it was a great experience once again.

"It's such an awesome experience playing with other guys from our league," he said. "It was nice just playing and having fun. It was a nice experience."

The Colts return to action on Friday with a home game in Didsbury against the Stettler Lightning.

Junior hockey girls showcase talent in Innisfail
Jan 16, 2020 2:20 PM
Comments
We welcome your feedback and encourage you to share your thoughts on this story. We ask that you be respectful of others and their points of view, refrain from personal attacks and stay on topic. To learn about our commenting policies and how we moderate, please read our Community Guidelines.