Truth is a rock that always remains

The truth is like an unmoving rock that can always be depended on to be there to offer us guidance and reassurance along our path. "The truth is that which does not move," said Tim Kirby, Royal Canadian Legion #223 comrade chaplain.
Nov 13, 2017 12:00 AM By: Simon Ducatel 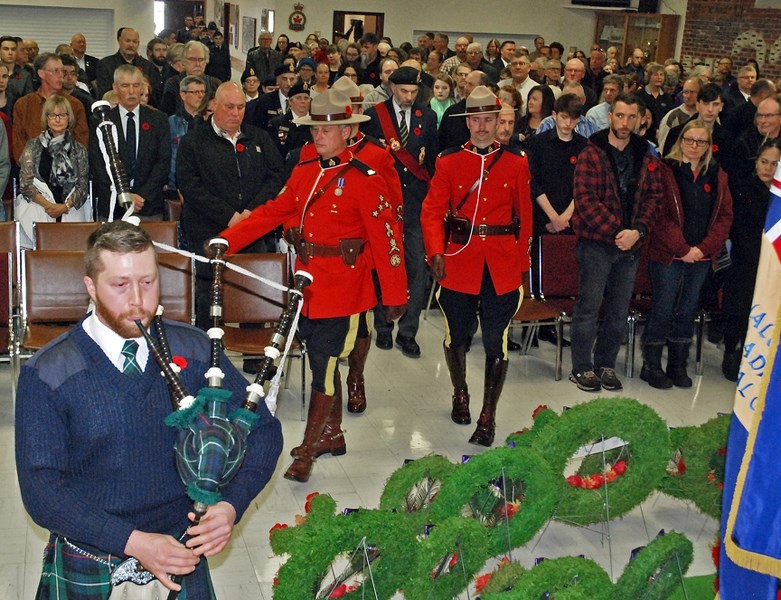 The truth is like an unmoving rock that can always be depended on to be there to offer us guidance and reassurance along our path.

"The truth is that which does not move," said Tim Kirby, Royal Canadian Legion #223 comrade chaplain.

"Every time you go back to the truth, it's there," he said during the annual Remembrance Day ceremony held Saturday morning at the local hall, which was packed beyond seating capacity. He also shared earlier last week a similar message at River Valley School as well as Sundre High School, Mountain View Seniors' Housing campus of care and the Sundre hospital.

In that respect, he said the truth is like the boulder near Rocky Mountain House that receding glaciers deposited millennia ago. First Nations people, explorers and pioneers alike historically used the rock as an unmistakable landmark providing them with the comfort of mind that they knew without doubt precisely where they were, he said.

"That rock was there to give you direction," the chaplain said, adding indigenous people considered the site sacred grounds upon which battle and bloodshed was forbidden.

In a more modern context, organizations and institutions such as the Canadian military, the RCMP and the Royal Canadian Legion are the rocks that provide a dependable foundation that we can always count on to be there, he said.

"This legion is a rock. Every year, we come back here to remember those who gave their lives," as well as those who came home scarred physically, psychologically, or both, he said.

Once known simply as shell-shock, post traumatic stress disorder can become a debilitating lifelong battle for recovering veterans who struggle to adapt back to civilian life, he said, recollecting the story of his own father who served during the Second World War, fighting at Dieppe and later in Holland.

The brutality and vomit-inducing stench of the battlefield was bad enough. But the memories that would go on to disturb his father's dreams were of the fanatical Hitler youth. Teenagers who, unlike the older soldiers that were more prone to surrender when all hope was lost, fought ferociously and relentlessly to the last breath, no matter what.

"To kill another person is immense ó something dies within us," he said during his service at the Mountain View Seniors' Housing facility on Friday, Nov. 10.

"That haunted him until the day he died," Kirby told those gathered at the legion.

Regardless of creed or religion, he said Canadians are all connected through the shared sacrifice of soldiers who fought for a brighter future. There are countries in certain corners of the world where repressive governments restrict their citizens' mobility, requiring travel permit passes simply to visit a neighbouring town or city. Failure to arrive at a determined location can even result in a death sentence, he said.

Yet, he said, we are among those who are fortunate enough to find ourselves graced with the privilege to have the freedom to follow the truths we hold dear thanks to the men and women who fought so hard ó and who continue to fight overseas and at home today ó to defend our freedoms.

"These are the rocks we stand on."

So in honour of their service, commitment and sacrifice to ensure our liberty, we must strive to reach our potential by living our lives to the fullest, he said.