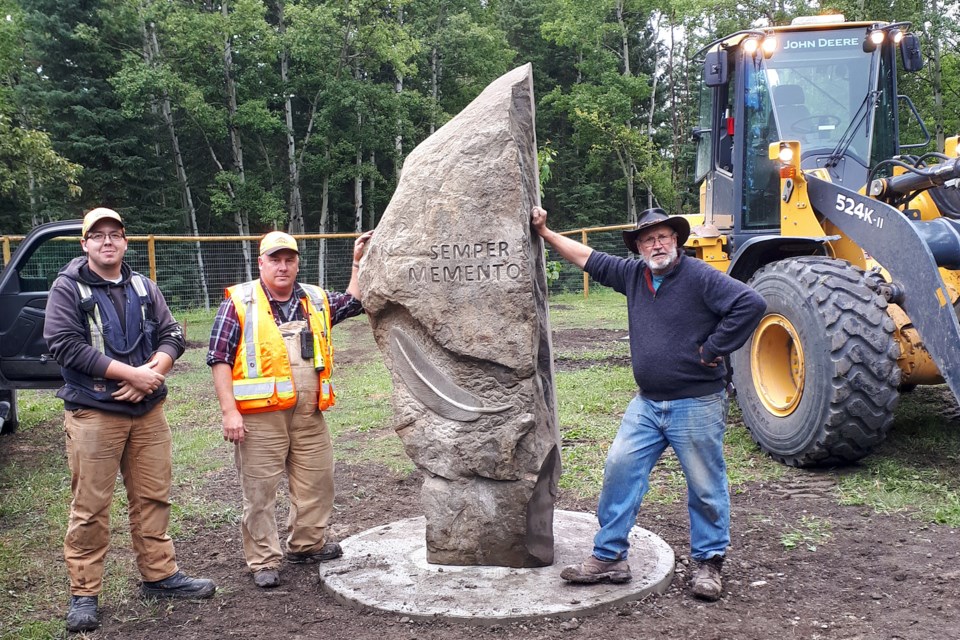 The new memory park's centrepiece was installed on Wednesday, Sept. 2, marking the end of the planned work before winter. Inscribed with Semper Memento, a Latin expression that essentially translates to Always Remember, the carved stone was made possible courtesy of local sculptor Morton Burke, right. Town staff James Minor, left, and Willy Logan helped install the centrepiece. Work on the new green space — located along an alley south of Fourth Avenue NE — is expected to resume next spring. Submitted photo

SUNDRE — Development of the new memory park will once again pick up in the spring.

But the project has already progressed substantially.

Major groundwork has been completed along with the installation of a central stone that was carved by local sculptor Morton Burke, as well as a gated perimeter fence surrounding the site, which is located along an alley south of Fourth Avenue N.E.

“We have finished with the project for this year,” said Bev Hallett, an organizer who has played an instrumental role in preparing plans for the green space.

Additionally, pads have been poured for benches, while approximately 15 trees and shrubs were planted, Hallett said by email on Sept. 10 in response to questions.

“Hopefully, we can have the project close to complete next year, which will include the construction and instalment of benches, more trees planted, a pathway and labyrinth built,” she wrote, expressing gratitude to all of the companies that have contributed.

That will all depend on the amount of funding raised through donations and perhaps grants as well, she added.

The municipality had previously committed to providing in-kind support in the form of maintenance such as mowing and watering, as well as assistance in installing the centrepiece stone, she said.

“We welcome and encourage interested individuals to take a look at the park and consider purchasing a tree or bench through the Sundre Palliative Care Association.”