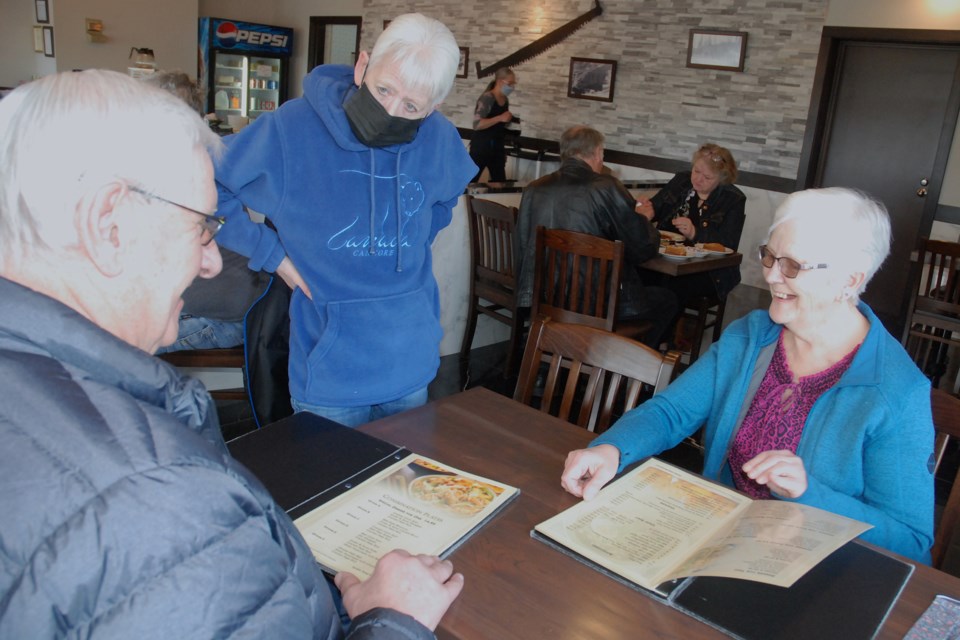 After removing their masks upon being seated, Sundre residents Marlene Ross, right, and Dwight Boychuk checked out the menu at the Sundre Hotel Restaurant on Friday, March 5, where manager Sandy Foster was busy taking orders. Simon Ducatel/MVP Staff

SUNDRE — Albeit not bursting at the seams with capacity crowds, the owners and staff of local restaurants are nevertheless glad to be seeing people come through their doors for dine-in once again.

“We have days that it’s really, really slow because people don’t come out as much as they used to,” said Chris Vardas, chef and owner of Original T’s Family Restaurant and Cedar’s Pub.

Since the provincial government announced on Feb. 8 its decision to relax restrictions by starting Step 2 of the economic relaunch strategy, Vardas said some people have been returning for dine-in service.

“I’m happy with what we’ve got so far,” said Vardas.  “There’s still a lot of people scared. But they’re coming out.

"Now that the vaccinations are slowly getting rolled out, I think it’s going to be a little bit easier.”

Although business remains somewhat slow, Vardas seemed confident about recovering in the longer term, provided confirmed cases of COVID-19 remain low and there isn’t another lockdown.

“Like I said last time, as long as the government doesn’t close us down, we’ll survive. If they do one more shutdown, well, I’m not going to close down,” he bluntly said.

For the time being, he remains optimistic.

“It’s better. We’ve got people in our buildings, which is great,” he said.  “We’re sanitizing everything as much as anybody possibly can. We sanitize more here than anybody sanitizes at their own home.”

The Sundre Hotel Restaurant has also seen people begin to return over the past month, with business coming and and going in ebbs and flows.

“It has its good and bad moments. Today is quiet, but tomorrow will be busy,” manager Sandy Foster said on March 4 during a phone interview

“We’re a small town, so of course a lot of our farmers are calving,” she said, adding when customers decide to come out can be unpredictable.

“I really couldn’t tell you when it gets busy, but we have had quite a few busy days over the past month," she said.

Although they had, like most restaurants, been offering takeout service during the shutdown, Foster is pleased to finally be able to personally welcome customers again.

“I love seeing people — I just can’t stand the masks,” she said.

“It’s not crazy. But people are starting to come. Slow, but it’s coming,” said Mitsoulas.

But customers who are able to afford to treat themselves to dine-in are very happy to be back through their doors, she said.

“And I’m happy too,” she said, expressing gratitude to everyone who’s supported their restaurant during difficult times.

Despite the pandemic, she said takeout has remained steady and is also optimistic the situation will, given enough time, turn around.