Sundre property owner thwarts theft in progress “We don’t want people putting themselves in danger, but we also understand their desire to protect their property. Use caution and common sense. Ask yourself whether your property is worth the potential danger you’re placing yourself in." — Cpl. Joe Mandel
Nov 28, 2019 3:53 PM By: Simon Ducatel 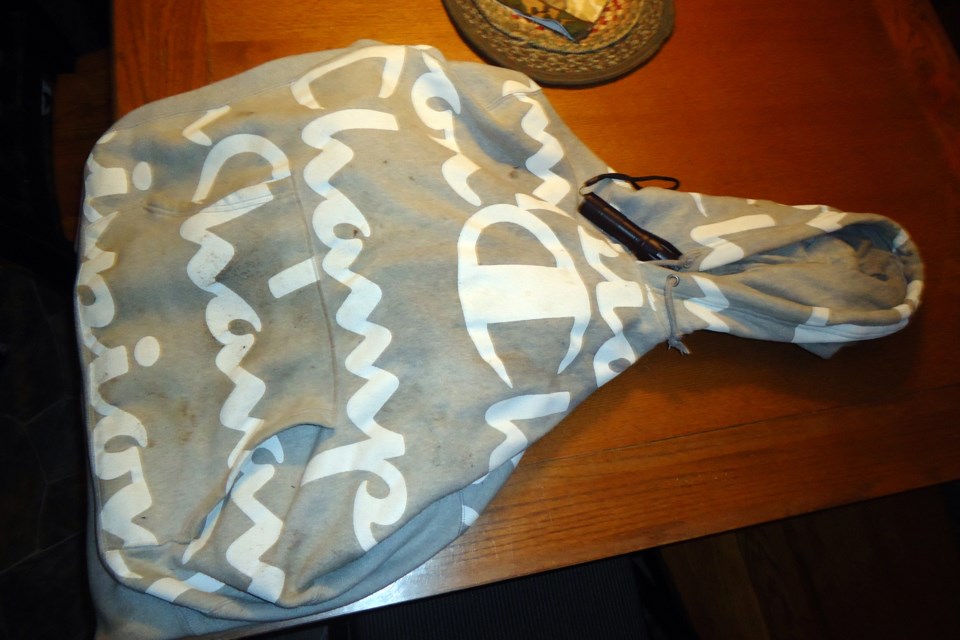 A burglar managed to squirm away during an altercation with a property owner that left him without this hoodie, and police are seeking help from the public for any information that could help identify the thief. Photo courtesy of Sundre RCMP

SUNDRE — A burglar was left bloodied after a confrontation with a Sundre property owner who caught the suspect red handed, police reported.

On Tuesday, Nov. 19 at about 4:30 a.m., a member from the Sundre RCMP detachment responded to a complaint from a resident stating that he spotted an unknown male breaking into his parked pickup truck, located on 10th Avenue NE, reads a press release dated Thursday, Nov. 28.

"The property owner stated that he was preparing to go hunting early that morning when he heard glass shattering outside,” says the statement issued by Cpl. Joe Mandel.

Upon investigating the source of the sound, the owner discovered the suspect hanging out from the driver’s side window of the vehicle as the would-be burglar rummaged through the interior, wrote Mandel.

“The property owner attempted a citizen’s arrest of the thief that resulted in a physical altercation,” he said.

“The thief managed to flee the scene prior to police arrival, but only after leaving behind his hooded sweater and receiving injuries that left him bleeding.”

Police believe the suspect managed to make it to a waiting getaway vehicle and fled the area.

“Footprints in the recent snow made by the thief that morning showed that he was prowling parked vehicles in the northeast residential area of Sundre, but may also be responsible for other theft incidents in town that occurred earlier that morning.”

Video surveillance footage provided by the property owner’s neighbour showed the burglar was possibly operating a Chevy Avalanche, said police, who are seeking the public’s assistance to identify the suspect. The thief was described as being about 5'9" to 6 feet tall with dirty blonde hair and a stocky build. He was wearing a distinct pattern hooded sweater and may have injuries to his face.

In a follow up phone interview, the corporal said the property owner was not harmed during the confrontation and is “absolutely not” facing charges.

“We don’t want people putting themselves in danger, but we also understand their desire to protect their property,” he said.

Under the Criminal Code, people can conduct a citizen’s arrest if they catch someone in the act of committing an indictable offence. There is a misconception among the public that someone will be charged with assault for defending their property, but that will depending on the circumstances not necessarily be the case, he said.

“Use caution and common sense,” the corporal said.

Each scenario is different and nothing is ever clear-cut, so carefully assessing an unfolding situation before intervening is paramount, he said.

“Ask yourself whether your property is worth the potential danger you’re placing yourself in,” he said.

In this case, the property owner pulled the pre-occupied burglar out of the vehicle’s broken window, and the suspect was during the ensuing melee able to squirm away, but not before losing the hoodie in the process, said Mandel.

However, he added that in the event a suspect is already fleeing with their back turned, a citizen would not be legally protected in resorting to physical measures, as the threat of danger could no longer be reasonably presented as a defence.

Anyone who might have information related to this incident or can assist with identifying the male responsible is urged to contact the local detachment at 403-638-3675. Alternatively, anyone who prefers to remain anonymous can contact Crime Stoppers at 1-800-222-8477 (TIPS), go online at www.P3Tips.com, or use the “P3 Tips” app that is available through the Apple App or Google Play Store.