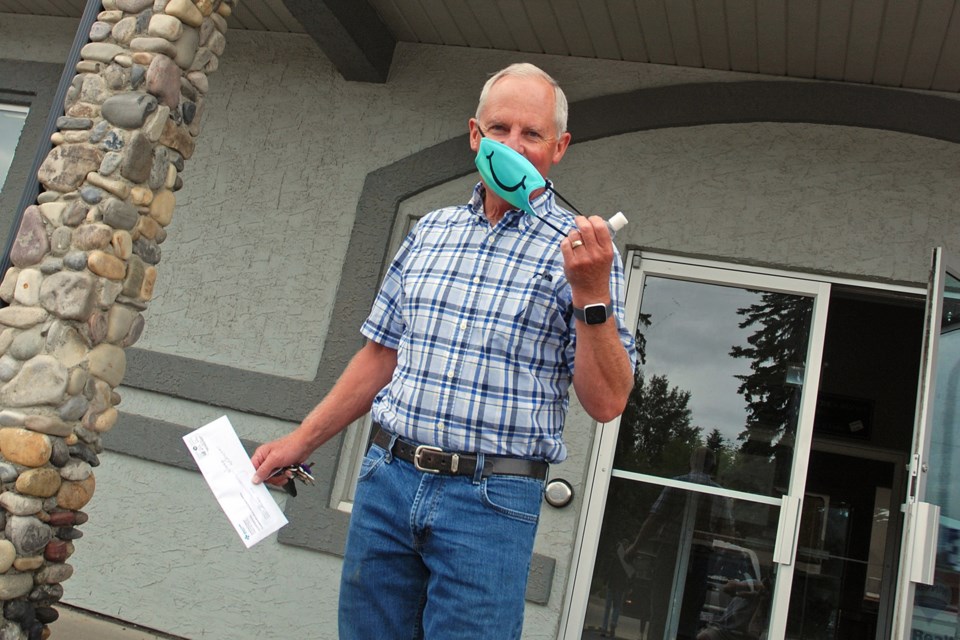 Sundre mayor Terry Leslie hopes to see masks become more commonplace in the continued effort to curb rising cases of COVID-19, and put on his own reusable covering before walking into the post office last Friday to return a letter with a wrong address. Simon Ducatel/MVP Staff

SUNDRE — The resurgence of confirmed COVID-19 cases in Alberta is prompting officials, including the local mayor, to urge Albertans not to become complacent in continued efforts to steam the pathogen’s spread.

The Innisfail area has had two cases -- one recovered and one active. The Sundre area had one case up until this week. That case was listed as recovered. A second case has been reported by Alberta Health Services (AHS) and it is an active case.

Red Deer County's case count has increased since Monday morning when19 cases were reported by  AHS -- 14 recovered and five active. As of this morning, the case count is now 23 with eight active cases and 15 recovered.

“This is a virulent spreader, this COVID-19. We cannot let our guard down,” said Terry Leslie during a phone interview last week.

“This was a call for everybody to not get casual about what’s going on…there are very serious concerns,” said Leslie.

“There was a bit of a super spreader event that took place,” he said, in reference to the recent rush of packed crowds at Sylvan Lake.

“There’s been some outbreaks in some of the counties,” he added, citing examples like Stettler, Knee Hill and Starland.

“Places like Sylvan Lake, they’re having to put serious conditions and requirements in place.”

Over the span of the past several months, Central Zone “only had 100 and some cases,” he said.

But over the course of just one week prior to the interview, that figure jumped to 153 new cases. Cases in Red Deer represented 12 out of the 153, whereas 20 were tracked to the County of Stettler, he said.

“We’re seeing numbers spike. We have to all stay vigilant,” he said. “My baby sister lives in the County of Stettler, and she’s very concerned.”

According to the provincial government’s Friday (July 24) COVID-19 update, Central Zone had 161 active cases, with 120 recovered.

“All of those summer villages, along the lakes in Alberta, folks just want to be outside, and that’s fine,” said Leslie.

However, he added that people should — out of respect for those around them — be mindful of maintaining mitigation measures like physical distancing and frequent hand washing.

Especially as the economy opens up in places like Sundre, where tourism is vital to the community’s lifeblood, he said.

There were as of the time of the interview two active cases in Mountain View County, and Leslie hopes every effort is made to ensure the number stays that low.

“We have to continue to be ever so careful.”

Mayor encourages use of masks

Reusable or disposable masks are an important element in helping to curb the spread of COVID-19, Leslie said.

The mayor implores people to don a mask when staying two-metres apart is not possible, such as going into places of business.

“When I walk into a store for example, and I see that the staff are masked, I think out of courtesy, you want to look after those frontline folks,” he said.

“I wore a mask when I got groceries earlier this week, only because: why not?” he said, adding many frontline workers wear them all day, every day.

“I think the masks need to be more common.”

The mayor also expressed concern about how politically polarized masks have become.

“What I’m sometimes troubled by is we’re almost becoming, societally, we’re judging and criticizing people whether they do, or whether they don’t meet our expectations. That’s not where we should be going,” he said.

Masks are available at fast food franchises for no cost, and can easily be carried around only to be worn when the situation calls for it, he said.

“We know that when you’re outside, the chances are really slim,” he said.

But if there’s an option to reduce the risk when physical distancing is not possible and it’s as simple and minor an effort as wearing a mask, “it’s a pretty small price to pay,” he said.

“They’re free! For heaven’s sake, go to Timmies, get a coffee, get some masks — get with the program!”

Leslie said Red Deer’s mayor had recently met with Premier Jason Kenney to bring forward concerns from the rural caucus of reeves and mayors, as well as to seek clarification with regards to masks.

“The province isn’t going to issue a mask mandate,” said Leslie, who expressed gratitude to the City of Red Deer and mayor Veer for all the proactive work they’ve done.

“What the premier has said is the numbers regionally should dictate whether there are restrictions that get put in place, and municipalities should make decisions,” he said.

The City of Calgary council, for example, voted in favour of the approach.

And although Red Deer has not issued a mandate, masks are being made available and people using public transit are asked to wear them, he said.

“If we suddenly found that in Mountain View County, we went from two to 20 — like they did in the County of Stettler — then we would maybe have to say, we’re going to dial back a few things.”

Regionally, he said the response should not be to overreact any more than it should be to underreact.