Incentivizing industry could spur billions in economic activity
Jul 26, 2020 6:00 AM By: Simon Ducatel 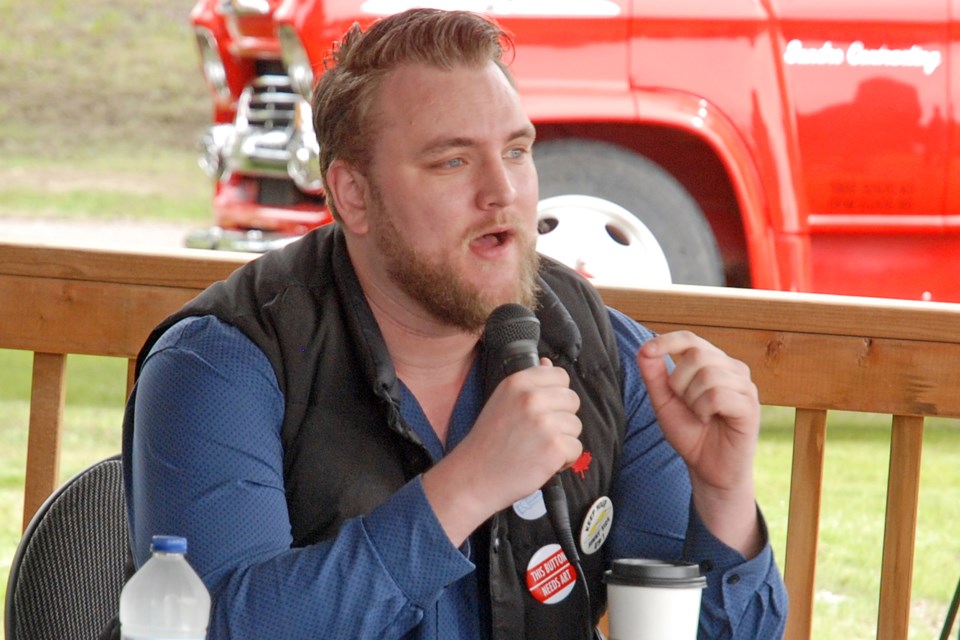 Brock Skretting, head of advocacy with Keep Alberta Rolling, says the provincial government could do more to further incentivize the province's film industry to tap into billions of dollars worth of economic potential. Simon Ducatel/MVP Staff

SUNDRE — The provincial government has an opportunity to encourage growth in the film industry, which has the potential to create billions of dollars in economic activity across many sectors, according to the head of advocacy of Keep Alberta Rolling.

“We have an established film industry that has batted above its weight in terms of the quality of shows that are made, and the outcomes of shows in term awards that they’ve won, and also popularity around the world,” said Brock Skretting during a recent interview.

Keep Alberta Rolling is a non-profit organization created to showcase the benefits and potential of the Alberta screen industry.

“But what we haven’t had is the investment to grow the screen industry to meet its full potential,” said Skretting, who was among those attending a press announcement about Pipe Nation, a new original series created by Edmonton-based film maker Raoul Bhatt whose fictional town called Hardwell will be portrayed by Sundre.

He said other provinces that have placed a greater emphasis on incentivizing and paving the way for greater investment in their film industries — such as B.C., Ontario and now Manitoba — are bringing in billions of dollars into their economies, along with tens of thousands of jobs.

The objective of Keep Alberta Rolling, a non-profit organization, is to raise awareness not only about Alberta’s vast potential in film, but especially the many benefits associated when the sector is thriving, he said.

The province has a rich and storied history of filmmaking, going back to the 1950s when the production of River of No Return, featuring Marilyn Monroe, was filmed in many iconic Alberta locations. Since then, other major studios have shot scenes for movies such as Unforgiven, Interstellar, Inception, The Revenant, as well as television series, including Hell on Wheels, Fargo, Heartland and more recently Wynonna Earp, he said.

Of course the COVID-19 pandemic temporarily hit the pause button on film production, creating challenges but also opportunities, he said.

“In a post COVID world, there’s a higher demand than ever for content. People have been streaming a lot of different shows. They’ve had more free time than usual in the last few months, and companies are going to have to make investments in replenishing their libraries,” he said.

“That’s an opportunity for Alberta to be both a landing pad for foreign investment and big shows from the Netflix’s and Disney’s and Amazon’s of the world, but also a launching pad for Alberta creators like Raoul, who have a good concept and they’ve put together a script and they can make an Alberta made-on-the-cheap version that will hopefully go on to grow into being picked up by one of these streaming companies. Because there is so much demand right now,” he said.

The industry, he continued, has the potential to bring new money into rural Alberta, creating jobs in all different sectors.

“You’re world building. So you have to, based on the script, create an entire new environment, and that requires a lot of goods and services,” he said.

“Basically, every skill is required to make a film or TV project.”

The economic ripple effect is substantial. Expenses, he explained, are not limited to just the production and what’s in front of the cameras.

While Keep Alberta Rolling believes the provincial government’s transition to a tax credit is a step in the right direction, more could be done to further encourage investments from major productions companies, “which we desperately need right now,” he said.

“They do offer a tax credit. But it doesn’t have the rural incentive, for example, which is something that is really big for getting the productions outside of Calgary and Edmonton,” he said.

“On (the government’s) platform, they said they were going to make us competitive with British Columbia and Ontario. And the amount that they’ve put in actually puts us more in line with Nova Scotia. So there’s a disparity there.”

Skretting sees an opportunity for the government, which recently rolled out Alberta’s Recovery Plan.

“Our premier has been very focused on jobs and the economy, and getting Albertans back to work in this recovery period out of COVID,” he said, adding more can be done “to look at this growing industry and use it as a lever for diversification and for getting attention in tourism back into Alberta.”

Even the provincial government recognizes the potential return on investment, he said.

“According to their own numbers, there’s a $3 to $1 return on investment on incentives that go out.”

Furthermore, he said the modern method of distribution for arts is now wide open to the whole world.

“That’s a new environment within the last decade, and that’s a big opportunity. The arts are no longer a hand out — it’s an economic opportunity. and it is the future.”