Cheque represents customer donations and money put aside after expenses
Aug 1, 2020 9:00 AM By: Doug Collie 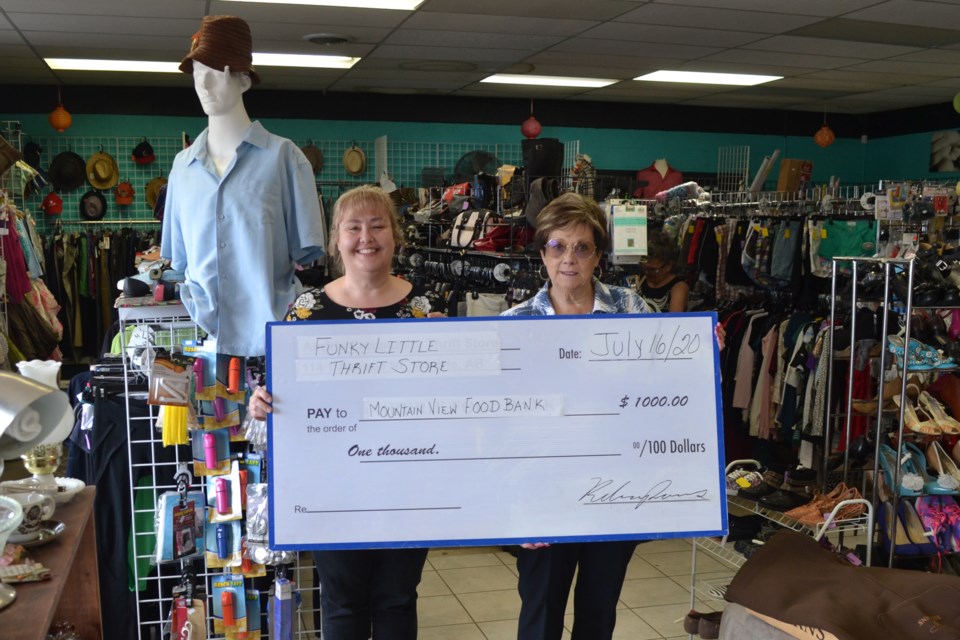 OLDS — When she reopened the Funky Little Thrift Store after the COVID-19 lockdown, owner Rebecca Powers was not sure what to expect.

Would people come in? Would they be spooked by the fact the virus was still in the air? Would they be worried about the ability to be socially distanced in the store?

In the end, none of those concerns were borne out.

So many customers have come in that Powers was able to present a cheque for $1,000 to Mountain View Food Bank director Pat Graham.

The cheque represents donations from customers plus money put aside for the cause after expenses.

“The community support has been absolutely astounding,” Powers said as she presented the money during a little ceremony July 16.

Graham agreed that area residents are a generous lot.

“We run (on) 100 per cent donations and unbelievable you know, that we’ve never not had any food, never. Not in the 30 years that I’ve been around.”

Graham was really impressed with the size of the thrift store’s donation.

“(It’s) unbelievable; really, really good. She should be very proud of herself,” Graham said.

Powers said although they have donated to other causes, this is the first time the Funky Little Thrift Store has donated to the food bank.

She has a soft spot for food banks, having had to utilize them as a single mother.

Powers runs another store in Airdrie and has donated to the food bank there so she decided to do the same here this year.

“I used it for many years, so that’s kind of close to my heart,” Powers said. “Any food bank is good for any community. I mean, it really helps me and my family.”

She saw the donation to the food bank as a way to give back to the community after her business was supported so well in the wake of the COVID-19 pandemic.

“I thought, ‘what better time to do it than right now',” she said.

Cougar sighting in Olds not unusal
Sep 19, 2020 4:00 PM
Comments
We welcome your feedback and encourage you to share your thoughts. We ask that you be respectful of others and their points of view, refrain from personal attacks and stay on topic. To learn about our commenting policies and how we moderate, please read our Community Guidelines.