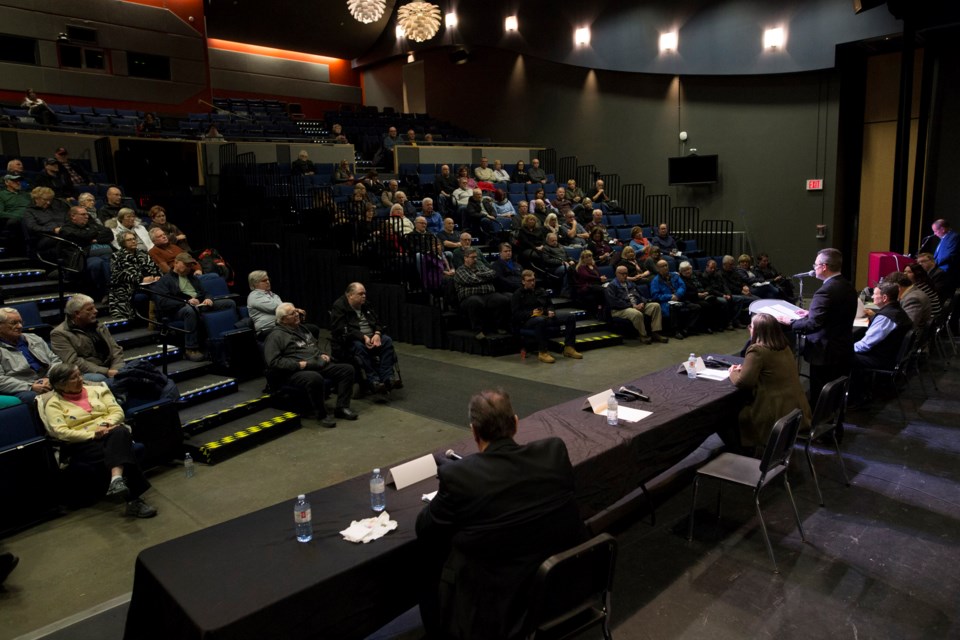 Candidates take part in the Town of Olds byelection forum at the TransCanada Theatre on Jan. 8.

OLDS — Two main issues dominated a forum for candidates in the Jan. 20 byelection.

One was the smell emanating from the Sundial cannabis processing facility.

The other was council’s decision last year to get provincial approval to increase the town’s debt limit so it could borrow $10.7 million to build a new centralized operations centre which would consolidate three current facilities.

The forum, organized by the Olds & District Chamber of Commerce, was held Jan. 8 at the TransCanada Theatre. About 150 people attended.

“Nobody should get a free pass on the quality of our air, regardless of what industry is represented,” Bishop said.

“For those of all ages, old and young, who suffer from breathing issues such as COPD and asthma, they should not have to be housebound because of air pollution in our town.

“We are naïve to think that the smell issue is not going to adversely affect Uptowne Olds,” he said.

Wilson said the Sundial plant provides jobs and much needed taxes. However, he agreed the smell is a problem that needs to be solved.

“From my perspective, the town and the people provide the social licence for all industry to operate, and in this case, certainly cannabis,” he said.

“We need to adjust the startup issues – particularly air quality – before we can have a proliferation of more (cannabis) industry.”

Thomson said he supports the industry, saying it has created some 700 jobs, about 490 of which are based right here in Olds.

He said Sundial officials are working on the smell issue and urged people to give them time to fix it.

Jan Thompson admitted she didn’t know much about cannabis, aside from the fact it appears to be useful for some medical issues.

“It is the wrong economical environment to be borrowing $10 million right now when you have O-NET on the books and you have a very volatile Alberta economy,” Dobush said.

He said a plebiscite should be held on the matter, noting one was held several years ago, regarding the town’s plan to spend $2 million on the aquatic centre.

He said public engagement on the matter would be “critical, given this is one of the largest projects that we’ve taken on.”

Wilson also said the town should undertake more engagement on the issue.

He predicted that by 2021, the town will be dishing out $1.7 million for principal and interest payments on the debt.

“That’s money that we’re going to have to fund somehow, some way, through fees, utilities, taxes,” he said.

Mitch Thomson said residents don’t have all the answers yet to determine if the project is a good one for the town right now or not.

Cody agreed with that assessment.

She said the priority should be to lure more businesses to town so that larger tax base could then fund a project like this.

Durieux understood the concern about borrowing big sums like that but said council made a “wise decision” to do so because the cost will only go up if it’s postponed for several years.

Besides, he said, the operations centre is just one aspect of the area, which is currently being reclaimed after having been the site of the town’s sewage and waste management facilities.

He pointed out the area will also feature a park and eventually more housing.

Bishop said overall there’s not been much information to enable people to make an informed opinion about the matter, but he agreed it will cost more if it’s postponed.

“I think it’s been a long time coming, but they do need it,” Jan Thompson said.

“When they’re going to actually spend the money and move forward on it, is the question, I guess.”