Pilot recycling program in Olds was a success 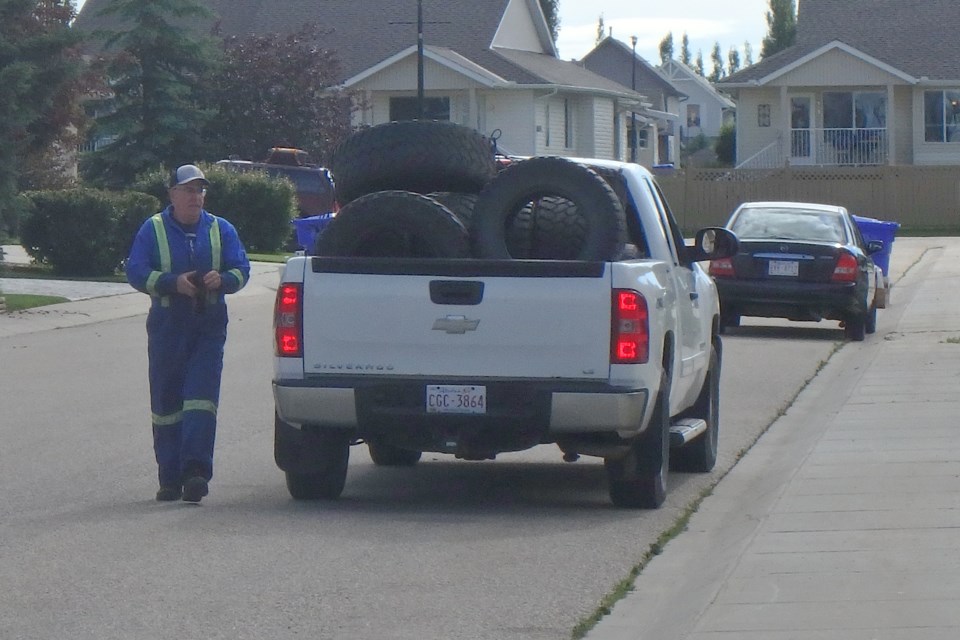 OLDS — It’s early days -- data is still being analyzed, but so far, it looks like a pilot recycling program held in Olds was a great success and will likely be rolled out to other communities in the future.

That’s the initial assessment of Ed Gugenheimer, chief executive officer of the Alberta Recycling Management Authority (ARMA), the entity that organized the program, which was scheduled to run July 13, 14 and 17.

Initially the program was only supposed to run for those three days, but demand was so strong that it ran for an extra day. In fact, ARMA staff were in the community for a total of five days, Gugenheimer said during an interview.

Residents were encouraged to bring their used tires, oil, electronics and paints next to their bins where they would be taken away for free and dealt with by a processing firm.

The ARMA covered the cost to co-ordinate the program, hire the contractor (Hitech Recyclers of Edmonton) and advertise the service.

Olds was the first community to sign up for it.

The genesis of the program was an effort to find ways to deal with wasted collection and disposal in the era of the COVID-19 pandemic.

It was noted that curbside or bin-side collection would cut down on the number of people travelling to and from -- or congregating in -- landfills.

Since the program ended, ARMA staff have been analyzing data from it. Gugenheimer is unsure how long that analysis will last.

Gugenheimer said later this year, ARMA reps want to meet with Olds officials to discuss the program and get their input on it. When interviewed, he was not sure when that meeting might take place.

Already though, some takeaways and surprises have emerged.

One positive observation is how popular the program was. ARMA staff don’t yet have any solid figures on that, but the fact the program was extended for another day proves its popularity, Gugenheimer indicated.

Another takeaway is that assuming the program will be that popular again, more employees will have to be involved.

Gugenheimer said they only had three people – their field inspectors -- involved in the program, along with the contractor and at least one volunteer.

“We didn’t have a lot of manpower to make that (happen). As a matter of fact, we even had one of our gentlemen use his own vehicle to help the process,” Gugenheimer said.

“So yeah, it was a learning experience. This was all about figuring out how it works and what we would do differently,” he added.

One other problem is that someone vandalized Olds resident Tom McCullough’s pickup truck by throwing paint on it. McCullough and his wife Donna believe that paint was set out to be picked up as part of the pilot program.

Gugenheimer is aware of the incident and said it's another problem that will have to be fixed if the program is rolled out again.

“We knew that could be a risk, but we wanted to assess it. But again, the team is rallying ‘round it and figuring out how we can make it work and avoid situations like that,” he said.

Overall, Gugenheimer’s initial assessment is that the pilot program was a success and it’s worth exploring the idea of rolling it out elsewhere in the province in the future.

“What it showed our organization is that there is a lot of pent up energy in some of these smaller communities -- at least in Olds, anyways -- where people really enjoyed that convenience of being able to take it to the curb,” he said.

“Overall, the program was a huge success for the Town of Olds as many homeowners took the opportunity to take part in the recycling pilot as offered by Alberta Recycling,” he wrote in an email.

Merritt pointed out people can still dispose of their recycleables.

“Any time during the year, electronics or E-recycling can be taken to the Olds Bottle Depot,” he wrote.

“Other products such as oil, oil filters, tires, used paint, propane bottles, batteries can all be taken to the Didsbury landfill where they have a recycling area and these items can be taken there free of charge.”