For a week, members of Calgary-based Trickster Theatre taught the craft of storytelling in Holy Trinity Catholic School
Mar 7, 2021 12:00 PM By: Doug Collie 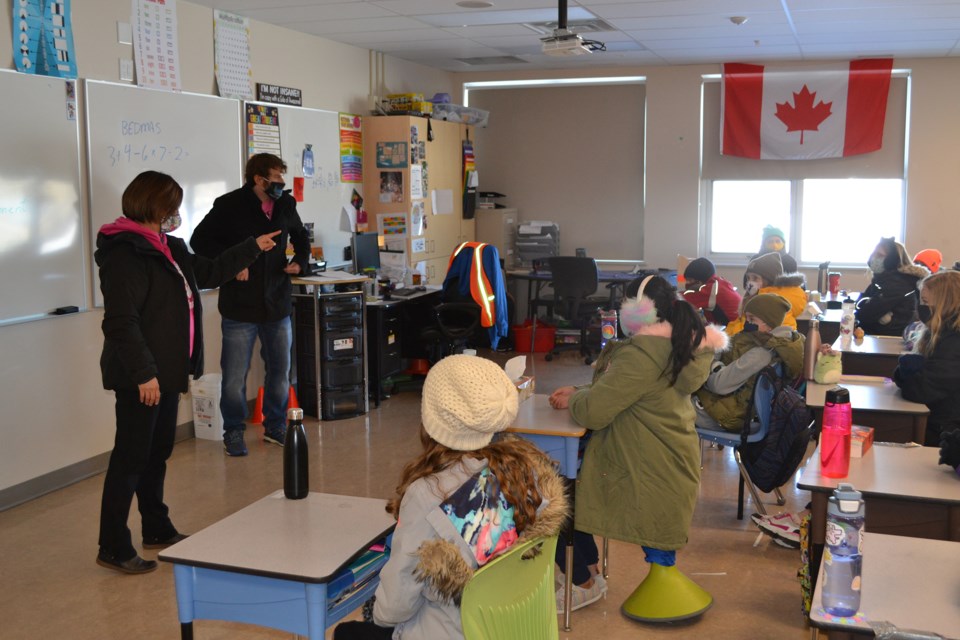 Holy Trinity Catholic School principal Valerie Norman calls a student out of class as part of a film being shot with the help of Trickster Theatre. Looking on is Grade 6 teacher Kyle Young. Submitted photo

OLDS — Students at Holy Trinity Catholic School got a five-day immersion in how theatre and film works with an Indigenous theme in recent weeks.

Six members of the Calgary-based Trickster Theatre spent a week teaching children how to make a play or film.

At the same time, they reinforced some of the lessons students have learned about how Indigenous people view Canadian history and their place in it.

During the week, students learned how to create storylines for performances, then came up with their own Indigenous-themed stories, which were then filmed for performance last Friday.

“We started this process about a year ago to have Trickster Theatre within our school, so we’re very excited to have them here,” she said.

Norman said the Trickster Theatre residency has been an invaluable opportunity to not only expose students to drama, but also learn about Indigenous culture and issues in a fun way.

Grade 6 teacher Kyle Young was among those involved.

“It’s been a lot of fun,” he said. "We’re getting loud, and the kids are really enjoying being able to throw out the ideas.

“A big thing that I really enjoy about teaching is having the kids guide the learning and working with them and Trickster Theatre does that really well; perfectly.”

Young said one lesson the students have been learning is that whoever tells or writes history communicates it from their viewpoint, which may not be the same as others.

One example, he said, is that settlers provided reserves for Indigenous people but that didn’t always work out well.

“When they actually showed up to these other places, there were no actual spots for them to live," he said.

“So we’ve learned a lot about how the Aboriginals were kind of treated and spoken to and in some cases, even manipulated and how that’s kind of affecting things nowadays and hopefully how we can all move together as a unified Canada and community to build ourselves up.”

Under the residential school system, Indigenous children were separated from their parents to live in residential schools far from home, where they had to learn non-native language and culture and ended up losing much their own culture.

Critics say that caused lasting damage to Indigenous people, contributing to issues some have today, including lack of self-esteem, alcoholism and drug addiction.

Some former residential school students testified they were physically and even sexually abused.

“A couple of years ago, I didn’t understand as much about how bad these residential schools were until we started with this. It’s been really cool,” Berlett said.

Berlett recounted the film her class decided to create.

“So there’s like this joke in the school that every year a kid gets sacrificed to the boiler to heat it up," she said. “So we’re kind of taking that and making it, like, the teachers are sacrificing these kids and realizing, ‘hey, this is wrong’ and try to apologize and kind of just, you know, kind of explain it."

In that film, Norman comes into the classroom and asks a student to come with her.  He's never seen again.

“So the principal’s kind of a bad person in their school,” Norman said jokingly.

When Berlett was interviewed, the class hadn’t decided on all the roles and responsibilities they’d have regarding creation of the film.

Berlett said in her case, she’d rather have an off-stage role – maybe as director.