Olds candidates discuss everything from economy to decorations 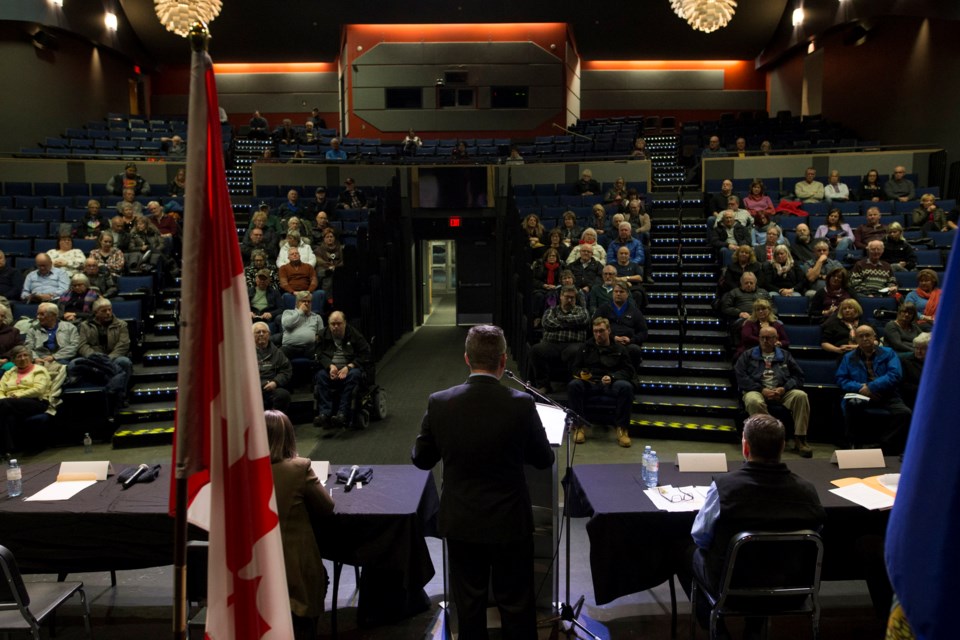 There are seven candidates running for one seat on Olds municipal council. Noel West/MVP Staff

OLDS — Although concerns about the smell from a marijuana processing plant and a plan to borrow $10.7 million for an operations centre dominated a civic byelection forum last week, they weren’t the only issues discussed.

The forum, organized by the Olds & District Chamber of Commerce, was held Jan. 8 at the TransCanada Theatre. About 150 people attended.

The byelection will be held Jan. 20 at the Royal Canadian Legion Branch 105 in Olds.

Seven candidates have let their names stand for a council seat which became vacant in October when former councillor Wade Bearchell resigned for personal reasons.

Some of the issues that came up included:

Wilson was asked what he would do to encourage development of more affordable housing in Olds.

He said development of that housing is “key” and that the town should work with developers to ensure that happens and that there is land available for it.

Dobush, Cody and Bishop expressed the need to encourage businesses to locate in the Uptowne area to keep it alive.

Dobush said one problem is businesses in the area are “battling” with the odour emanating from the Sundial Growers cannabis processing plant.

He said ORE is “an essential part of this town” and what it brings to the community is “absolutely huge.”

Dobush suggested maybe one of ORE's facilities could be sold off to help pay the bills.

Jan Thompson, Wilson and Bishop all agreed the town should let contracts to local businesses whenever possible, but not if those costs are out of line with prices quoted by contractors in Central Alberta or further afield.

Candidates were given a chance to give their thoughts on whether the town is spending too much money on flowers, artwork and trees.

Bishop agreed with other candidates that money has to be spent carefully.

“I think at the end of it all, trees and shrubs and bushes, they actually produce a really good environment for this town that I think most of us enjoy very much,” he said.

Mitch Thomson, who works for Olds Institute (OI), was asked if he felt if he was elected he would be in a conflict of interest and would recuse himself from all discussions related to the Olds Institute.

“Clearly, if there is something that I personally can benefit from I need to recuse myself, but I’ve looked into it and this is not the case,” he said.

At times there was some frustration expressed because some candidates didn’t get a chance to answer questions that were posed.

Get ready for Oldstoberfest Week
Sep 23, 2020 9:00 AM
Comments
We welcome your feedback and encourage you to share your thoughts. We ask that you be respectful of others and their points of view, refrain from personal attacks and stay on topic. To learn about our commenting policies and how we moderate, please read our Community Guidelines.