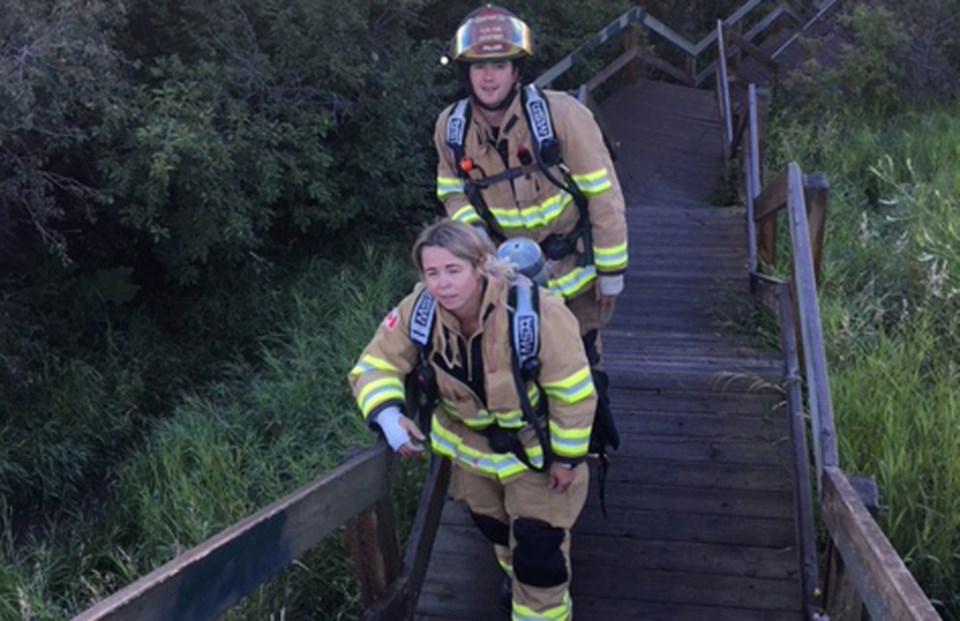 Crystal Raven, foreground, and Corey Piller were among the five Olds firefighters who climbed stairs on Scotsman's Hill in Calgary as part of this year's virtual Bow building stair climb to raise money for Wellspring Calgary, which helps people battling cancer. Submitted photo

OLDS — Five members of the Olds Fire Department (OFD) participated in the sixth annual Firefighters Stair Climb Challenge – but in a different way this year, due to the COVID-19 pandemic.

Instead of climbing all 1,204 stairs of the Bow Building in Calgary, four of them climbed up and down the stairs at Scotsman’s Hill, behind the Saddledome in Calgary and one climbed the stairs in the Olds fire hall.

Originally, the climb was supposed to be held in May, but due to COVID -19 restrictions, it became a virtual event. Participants were asked to make their climbs between July 20 and July 26.

Originally, 13 Olds firefighters had signed up for this year’s climb when it was slated to be held in May. However, because of the new date, only five were able to actually participate in the event.

But again, as local organizer Noel D’arcy noted during an interview, this was not a normal year for the event.

The four at Scotsman’s Hill each made the climb eight times, to equal all the stairs in the Bow building. Via an app, they timed the climb, took photos, and uploaded everything to the calgarystairclimb.com website.

The climb is held each year to raise money for Wellspring Calgary, which provides support, resources and programs for people living with cancer and those who care about them. That includes firefighters, because cancer is one of the occupational hazards they face.

All the firefighters compete with each other – and themselves – to climb right to the top as quickly as they can.

They do so dressed in full firefighter gear – including hats, jackets, boots and air bottles -- which in total adds about 60 pounds to each climber.

Although he was a little disappointed the climb didn’t occur in the Bow building as usual, D’arcy agreed that was for the best, due to the pandemic.

“Honestly it would be like a petri dish, for lack of a better term, for covid,” he said. “You know, you’re talking about 500 people running up into the same stairwell, breathing heavy, sweating.

“Yeah, it’s probably not the best idea at this time as far as trying to stop the spread of this disease.”

And terrible as the COVID-19 pandemic is, D’arcy said raising money for cancer treatment remains of great importance.

"And the funds they get from this stair climb are vital towards the care for people."

D’arcy admitted the sight of four firefighters climbing up and down the stairs at Scotsman’s Hill was a bit unusual.

“We kind of turned heads while we were down there, just with people walking by,” he said.

He’s hopeful that next year, the fundraiser will return to the Bow building, just because of the camaraderie among supporters and firefighters from around the world.

For information on how to donate to the stair climb (and Wellspring Calgary), visit calgarystairclimb.com.