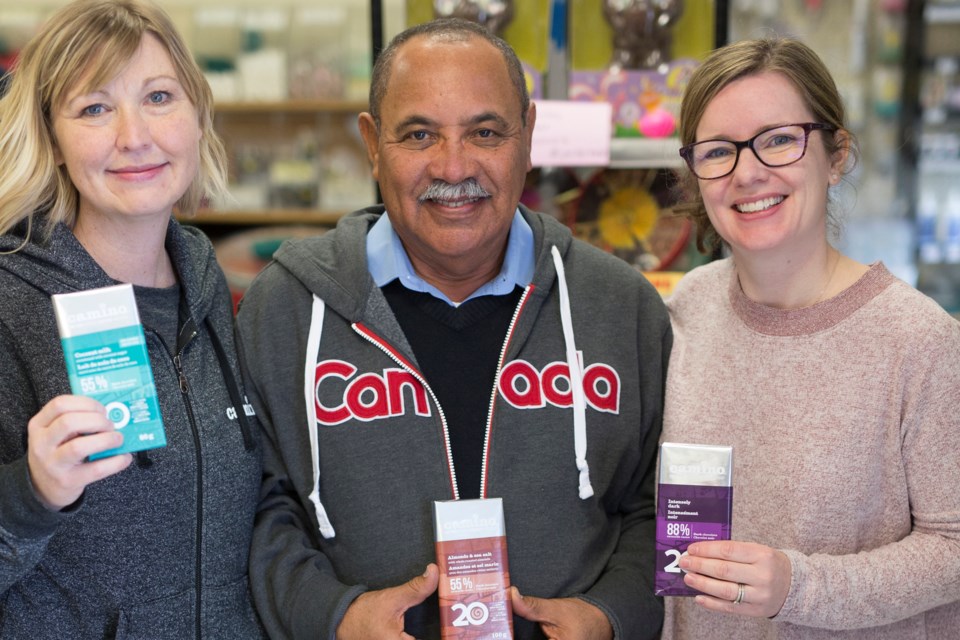 OLDS — People who grow cacao, a main ingredient in chocolate, only receive about three per cent of the cost of a chocolate bar, an agronomist and cacao farmer from the Dominican Republic says.

Pilar Ramirez conveyed that message during a recent visit to Olds for A Taste of Fair Trade event. The town is in its 10th year as a Fair Trade Town, being the first in Alberta and the seventh in Canada designated with the accreditation.

He said farmers would need at least five per cent in order to make a decent living.

Ramirez, along with a couple of representatives of Camino, an Ottawa-based fair trade and organic chocolate maker, gave presentations on cacao growing, chocolate-making and fair trade.

Fair Trade-certified goods are those sourced from producers who pay a living wage, use environmentally-sustainable methods, do not use child or forced labour and have gender-equitable operations.

On March 9 and 10, the group presented at École Olds High School, the Cocoa Tree Bake Shoppe and set up a display of fair trade chocolate and cacao at Nutters.

During an interview, Ramirez said even fair trade businesses don’t pay cacao farmers much more than three per cent of the cost of chocolate bars.

But he said they offset that by offering a more stable price and by paying a premium for the product, which farmers use collectively to improve their communities by fixing up schools or roads for example.

He said the average five-hectare cacao farmer in the Dominican Republic makes about $2,000 a year at the current rate of payment.

Ramirez said he’s hopeful his visit to Olds will have made a difference.

“I think in the future, people like you, people I’ve seen here in Olds, they will — you know — become more aware of what farming is doing and will push for the chocolate makers to be more conscious with the farmers,” he said.

Sundre resident Dianna Jenkins was among those who tried fair trade chocolate and cacao during a visit to Nutters on March 10.

“They say it’s good for you and I think if you mixed it in with something it would be OK.”

Jenkins was asked if she’d be willing to pay a few cents more for a chocolate bar if she could be assured that extra money would go to cacao farmers.

“Yes, yes I would,” she said. “Instead of a big corporation, I’d rather give my money to those people.”