BOWDEN — People braved the cold and rain and were spread three and four deep across the Reddi Mart parking lot in Bowden on Friday, Sept. 20 as ATB Financial staff honoured store owners Larry and Shirley Adams for all they've done for the community.
Oct 1, 2019 10:10 AM By: Doug Collie 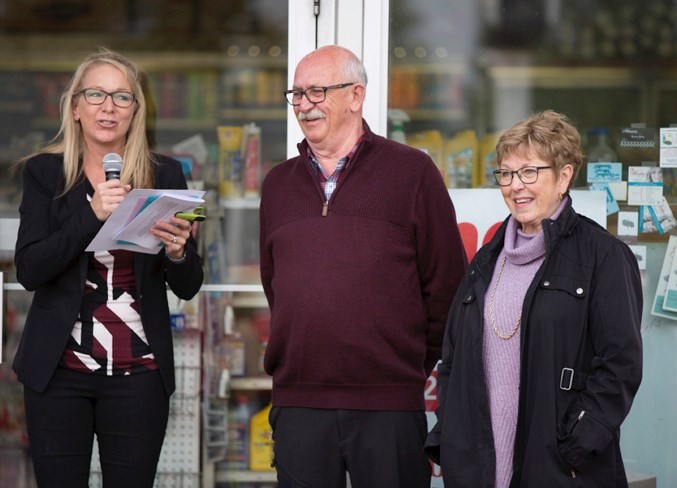 Bowden residents Larry and Shirley Adams smile as Kim Urichuk, left, who owns the ATB Financial agency in Bowden, pays tribute to them for all their involvement in the community.

BOWDEN — People braved the cold and rain and were spread three and four deep across the Reddi Mart parking lot in Bowden on Friday, Sept. 20 as ATB Financial staff honoured store owners Larry and Shirley Adams for all they've done for the community.

The couple received a bench with a commemorative plaque which sits out by the road and which Shirley says is already well-used by local residents — especially kids. The plaque reads, "Thank you Larry & Shirley for your commitment to our community."

They also received a picnic table and benches — also already well used — at their home.

Those in attendance for the occasion included Bowden mayor Robb Stuart and Greg Skotheim, the town's chief administrative officer.

Larry and Shirley  said they were overwhelmed with the presentation.

"I couldn't believe in that horrible weather that people would stand out there. I kept feeling that they should come closer; we all needed to stay warmer," Shirley said with a laugh during an interview with the Albertan.

"I immediately got tears in my eyes when they started talking about it," he said.

"And as that was going on, I was looking out in the crowd — just sort of scanning the crowd. And everyone who was out there was doing basically the same thing we do, and each and every one of them could have been up there getting an award (too) as far as I was concerned."

The family bought the store and moved to Bowden in 1985 from Fairview, Alta. so they could be closer to family. Both were raised in the Rocky Mountain House area.

Over the decades they gave to the community in countless ways. Larry served on the fire department for 22 years. Their kids were involved in sports, so Larry's activities included coaching baseball and basketball.

Shirley's contributions have included serving on town council for many years and being a longtime member of the town's cemetery committee. She has chaired that committee for years and continues to do so.

They've also donated to various sports teams and clubs over the years — monetarily, and by providing slushies for kids after games and windups.

Both say they plan to continue contributing to the community.

"I don't think anything will change," Larry said, although "we may not be quite as active as we get older," he added with a laugh.

Larry and Shirley were asked why they contribute so much to the community.

Shirley said the couple did live in Edmonton for a while but they just feel more at home in a small town.

"It's easy to be involved in small towns because you get to know your friends and your neighbours and your school very well — and your church — and I think that's what makes it so easy. And you always see a need," she said.

She also figures she was heavily influenced by her parents who were always very involved in their community.

"You just keep doing it — until you wear out," she said with a laugh.

Larry and Shirley are very appreciative of the gifts they received.

The presentation was the brainchild of Kim Urichuk who owns the Bowden ATB Financial agency. She also served as MC for the occasion.

It was made possible via ATB Financial's Surprise And Delight program.

"It basically recognizes longtime customers who contribute within their community," Urichuk said.

"I have known Larry and Shirley for the 16, 17 years that I've lived here and always been associated with them in a lot of volunteer capacities, and they're also a long-standing ATB customer. So just the two hand in hand and knowing what kind of people they are and what they do in the community just made them an obvious choice for me."