Sundre aunt wants justice for her only niece

Man charged with murder had lengthy history of violence and abuse
Jun 1, 2021 12:00 PM By: Simon Ducatel 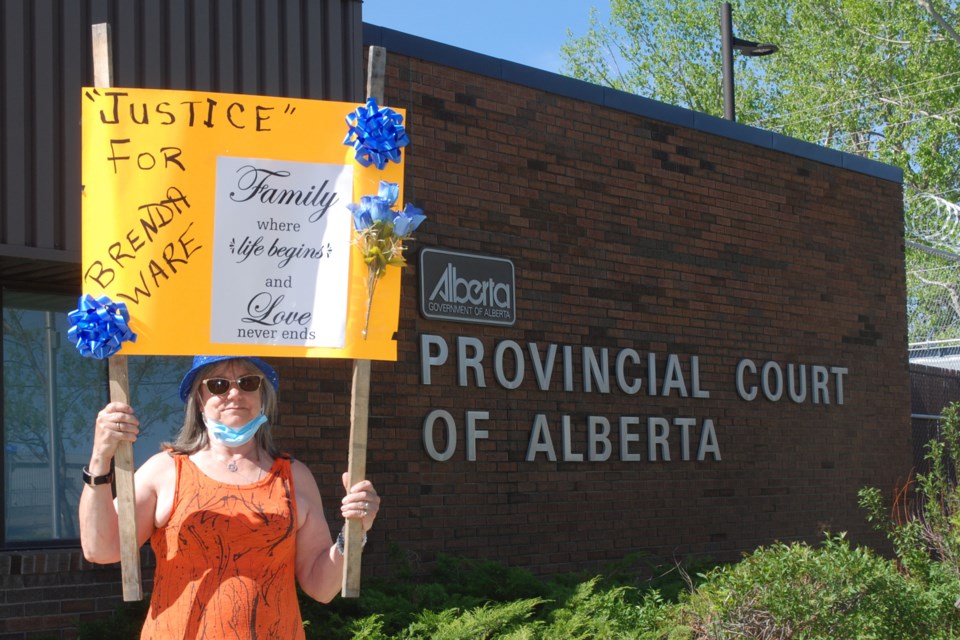 Valerie Ware stood solo outside the Didsbury provincial courtroom on Monday, May 31, when Philip Toner was scheduled to appear remotely. Simon Ducatel/MVP Staff

MOUNTAIN VIEW COUNTY — A Sundre resident says Canada’s justice system has failed her only niece, whose body was found northeast of Radium, B.C. in Kootenay National Park earlier in May by RCMP.

Philip Toner, who had recently finished serving a five-year sentence for sexual assault and deemed at risk of re-offending, was subsequently charged with second degree murder in connection with the homicide.

He was scheduled to virtually appear yesterday at the Didsbury provincial court, where Valerie Ware stood solo in solidarity with not only her niece but other victims of violence and domestic abuse.

“The laws have to be changed, and it has to be stricter so violent people like him don’t get out again,” said Ware about the intent behind her decision to attend.

“People like this got a bad history, and they still get let out,” she said.

“The cops are bringing them in, and the justice system is letting them out. So, something has to be done.”

Ware said she was in “terrible shock” about the entire ordeal, but hopes to raise awareness and that others will join the call for justice for Brenda.

“From this guy’s history, it is terrible, and he shouldn’t even have been out. It’s just unreal.”

The kind of changes she would like to see include improved efforts to caution communities when convicts with violent histories who have finished a sentence are released, in combination with enhanced measures to maintain better track of and keep a closer eye on such individuals, she said.

Although the rally had initially drawn the interest of some other people who wanted to participate, uncertainty about the court date’s location hampered the turnout.

“I did have a few supporters thinking about coming out with me. But with all the confusion, I’ll be standing here alone,” she said.

“We’re still thinking of Brenda, no matter how many people are here — we are going to fight for justice for Brenda Ware.”

Ware said through some tears that started to swell up that Brenda’s absence has left a void in her life.

“She was my only niece, so I’m very saddened — she was very special to me. She was a very happy girl, smiles all the time. She was into sports. A very loving person, very caring, nurturing, and I’m really going to miss her,” she said.

Valerie said she would most miss Brenda's beaming smile and a nurturing attitude that was always positive.

The aunt said when asked that the family had been completely unaware of Brenda’s relationship with Toner prior to her going missing.

“That is what is so heartbreaking to the family — nobody even heard of him before it got reported,” she said.

The last time Valerie spoke with Brenda was on April 30, when the aunt had an appointment at the salon in Sundre where her niece worked as a hairdresser.

At the time, Brenda only talked about having recently broken up with an ex-boyfriend who was not Toner, she said.

“That’s all she said. She didn’t say anything about meeting a new boyfriend or anything in her life. So, it was quite shocking to me — very heartbreaking.”