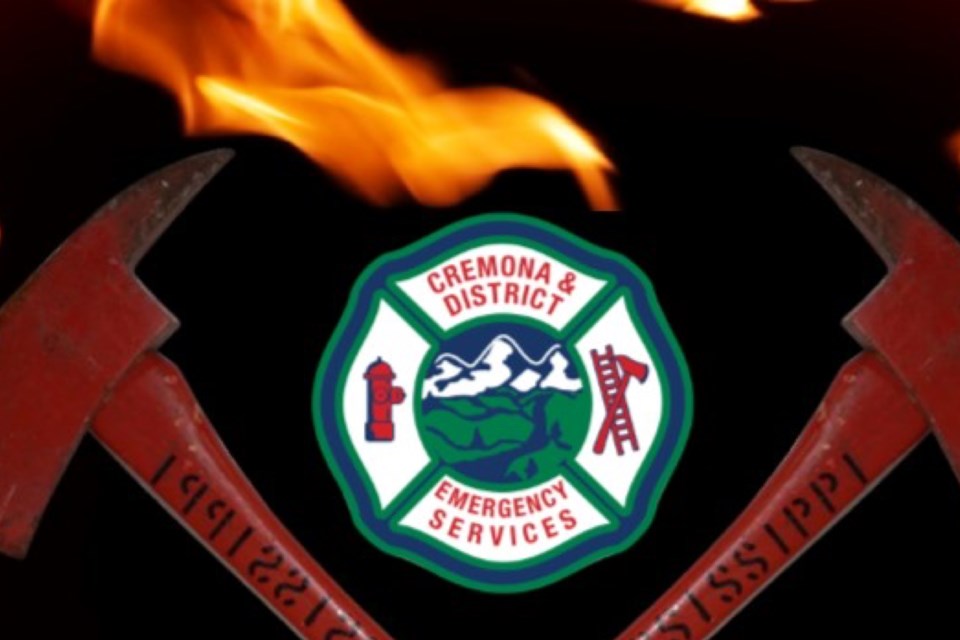 “We’re still undergoing the investigation. It is suspicious in nature,” said Kevin Miller, adding during a phone interview on Tuesday, May 11 that he was not at liberty to provide more specific details.

CDES was alerted to the structure fire, which was on a rural property just north of Burnt Timber Road, on Wednesday, May 5 at 1:20 p.m., Miller said.

“It was a primary response from Cremona and District Emergency Services,” said the chief, who has led the department for about six years.

The department has two fire stations — one in Cremona as well as Water Valley.

“We had a response out of both of those halls and an auto aide response, which is mutual aide that’s automatically dispatched at the same time for that type of event, that came out of Sundre,” he said.

Auto aide response is an automated system that facilitates coordinated efforts among neighbouring departments in the event of structure fires, he explained.

The Sundre Fire Department dispatched an engine as well as a tender, while CDES brought out two engines and a tender. Although Miller said he initially requested assistance from Didsbury upon arrival but upon quickly assessing the scene made the decision to stand that department down.

“Nobody else was on scene at that time,” he said.

“We arrived to a working fire. We quickly made entry and found that it was basically a fire that had to some degree starved itself of oxygen and was still active but not growing, because all the doors and windows were closed up.”

Although the home was not fully engulfed in flames as a result of limited ventilation inside, firefighters nevertheless had to contend with smoke and heat.

“However the fire occurred, because all the doors and windows were closed it propagated a ton of smoke, to a point where it didn’t have any oxygen to grow anymore,” he said.

“So, although we entered an atmosphere that was high in heat and had some visible flame, it was still, I’d call it somewhat dormant. There was still some (fire) suppression that needed to happen, but for the most part, it was fairly quick for us to gain control over.”

He described the property as featuring one, single-family dwelling along with multiple outbuildings including storage structures like barns and sheds, and said the fire was contained to the structure without spreading.

Nobody was home at the time.

“It looked to me as though people lived in it, but there was nobody in it when we initially entered the structure,” he said.

By about 1:55 p.m., Miller said he called the situation under control, but did not clear the scene until much later.

After fire crews suppressed the blaze, the chief said he sought the presence of police due to the suspicious nature of the fire.

“So, I requested RCMP attend at that point,” he said.

Once police arrived at the scene, the effort to put the puzzle pieces together began.

“I started the investigation right away under the direction of RCMP,” said Miller.

“After we got it under control, basically, we handed the scene over to them, and they gave us permission to perform our side of the investigation, which is fire cause and origin.”

Although the chief indicated the source of where the fire started was determined, he was not at liberty to discuss specific details.

“Due to the nature of the incident, I hired an external investigation company to come in and assist me. Since then, I’ve actually turned the full investigation over to them just to make sure that everything’s being looked after appropriately.”