Sister act on the volleyball court

From the start, Kennedy and Kassandra Menzies have always been a package deal. The identical twins are in the middle of their third year on Olds College's women's volleyball team, with Kennedy playing left side and Kassandra at libero.
0
Jan 12, 2016 12:00 AM By: Mountain View Today Staff 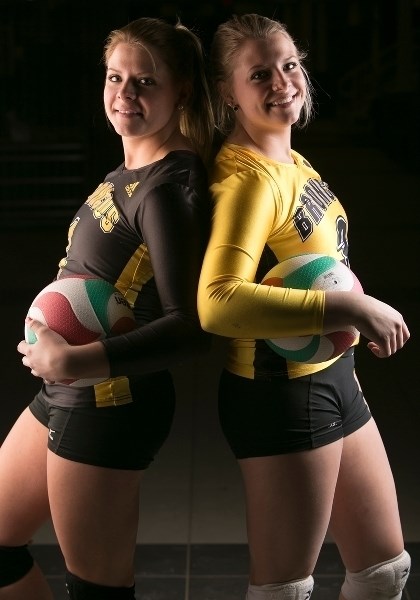 Kennedy, left, and Kassandra Menzies at Olds College on Jan. 7.

From the start, Kennedy and Kassandra Menzies have always been a package deal.

The identical twins are in the middle of their third year on Olds College's women's volleyball team, with Kennedy playing left side and Kassandra at libero.

They chose the Broncos program because it allowed them to stick together.

"We wanted to go to a place where they would take both of us. We tried other places but they only had room for one because we were so much the same. But Chris (Wandler) said there'd be room for both of us," said Kennedy, who was born one minute after Kassandra.

Kennedy said their parents worry about them getting separated. Playing and studying at Olds College together gives them some peace of mind.

The Menzies sisters are from Spirit River, a town of barely more than 1,000 people, located about an hour's drive north of Grande Prairie. They attended Spirit River Regional Academy, a kindergarten to Grade 12 school, where everybody knew each other.

"I loved growing up in a small town. Our community is so tight-knit," Kennedy said.

The small-town atmosphere is like being surrounded by family, the twins say.

And the thing about family is, nobody gets to choose which one they belong to. At school, young students were mentored by the upperclassmen, grew up to become mentors themselves, and learned how to get along with others.

"I think it helped me with life skills. Even if you have a problem in a small town, you can't just move schools. You have to sit down and work them out," Kassandra said.

For their entire lives, Kennedy and Kassandra have done everything together. They took dance lessons -- mostly tap -- but also some hip hop and ballet. They also continue to play beach volleyball when they return home during summers.

"We're like two peas in a pod. She's my sister but also my best friend. We have spent maybe a week apart and that was one time when we were 16. She made the provincial team and I tore my ACL so I went home," Kennedy said.

Up until Grade 6, they even wore the same outfits, styling their hair the same way, Kassandra said.

They couldn't resist the odd prank, switching desks in the classroom.

"Our teachers wouldn't know, but our friends would just be giggling because they knew we were switching and the teachers didn't have a clue," Kennedy said.

The sisters tend to finish each other's sentences, at times answering in unison. They agree on a lot, including what they believe is the best thing about having a twin.

"Always having somebody there. I know if everybody was against me in the entire world, she'd be there for me 100 per cent. I trust her with my life," Kassandra said.

And the worst: constantly being compared, which happened when playing on the same team growing up, she continued.

"I think that's kind of tough to swallow because we're not the same person. We are similar but we're not the same. Everybody learns differently. You wouldn't compare me to another teammate of mine but since we're twins, we just get that."

Both parents played volleyball and their mother coached, so the twins were introduced to the sport early.

At five-foot-three, Kennedy is one of the shortest outside hitters in the ACAC (Alberta Colleges Athletic Conference). However, she's always embraced the underdog role.

"Proving people wrong is one of the best things," she said. "When people say you can't do something and you do, it's super rewarding."

Both are finishing up their business administration programs, majoring in sports management. But after that, their paths will part for the first time in their lives.

Kennedy is graduating and plans to enter the workforce. She also hopes to help coach volleyball somewhere.

Kassandra is returning for one more year to enroll in the veterinary medical receptionist program. She plans to play for the Broncos again.

"We've made so many good memories together here. I couldn't have pictured it any other way. I wouldn't want to spend my college years any other way."

"She's so close and any time I need to vent, she's always there supporting me 100 per cent. I think it's going to be hard not having her around." KASSANDRA MENZIES

For the love of the game in Sundre
Feb 18, 2020 6:25 AM
Comments
We welcome your feedback and encourage you to share your thoughts on this story. We ask that you be respectful of others and their points of view, refrain from personal attacks and stay on topic. To learn about our commenting policies and how we moderate, please read our Community Guidelines.