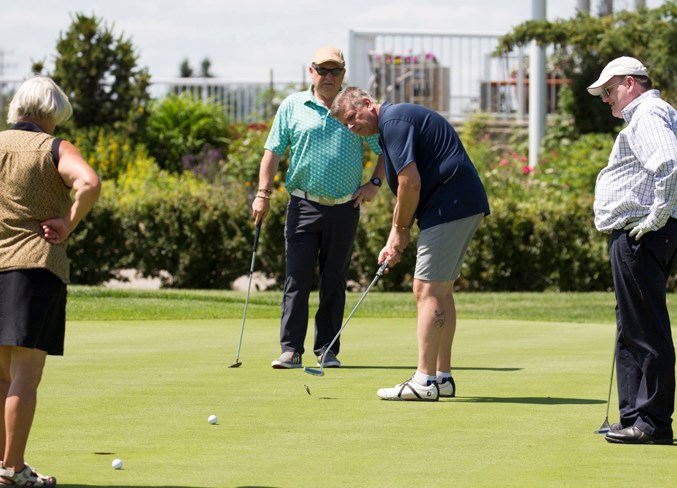 OLDS — Like many other activities this year, the 2020 Olds Rotary Club golf tournament is a virtual one due to the COVID-19 pandemic.

This year, it’s all online. Participants are invited to register on the Rotary Club website or the club’s Facebook page any time between now and July 6, then go out a play a round of golf at any course. Funds raised go toward the Rotary Athletic Park.

“People can just participate singley, as a twosome or as a team,” Vicky Barzey, the club’s community public image chair said during an interview, noting golfers can shoot nine or 18 holes if they wish.

In fact, several rounds have already been played.

“Given the status of the world right now, we decided to turn it virtual so that we could still do a bit of fundraising and be able to get people out to golf.

“Basically what people do is they’ll golf and they send us their scorecards and that will then give them an opportunity to be put in a draw for prizes.”

Barzey said prizes include several rounds of golf donated by various golf courses as well as at least $500 worth of prizes in one basket.

Participants are asked to send in their scorecards by midnight July 6 in order to be entered into the draw. Participants/donors will receive a charitable receipt. The draw date is July 9.

The suggested minimum donation is $25, although Barzey said many people are donating as much as they regularly would to enter a tournament.

“It’s not that we’re going to be making the type of money that we typically would from the tournament but that’s not where we were at this time.

“We were just wanting to be able to give people an opportunity and a reason to get out of their four walls and get some exercise and some fun happening in their lives again.”

It was suggested to Barzey that turning in scorecards could be embarrassing for some.

“I’m not going to post scores unless of course someone wants me to,” she added with another laugh.

Barzey conceded that some people may miss the camaraderie that came with everyone playing in a big tournament on the same day, and meeting later for supper in the clubhouse.

“I think it was the best way to go this year,” she said. “Maybe next year we’ll bring it back to life, but for now it was the best work-around to still have something that the area could enjoy.”

On the other hand, she could see the club doing another online version of the tournament in the future, because it does have its advantages over the traditional version.

“I think it’s brilliant because it doesn’t limit people to a day,” she said, noting it’s also cheaper for organizers.

Organizers decided to go with the online version of the golf tournament about a month ago.

“We thought about it and away we went,” Barzey said. “We thought, ‘well, are we going to do it? Then we’re going to jump in with two feet and just do it.’”