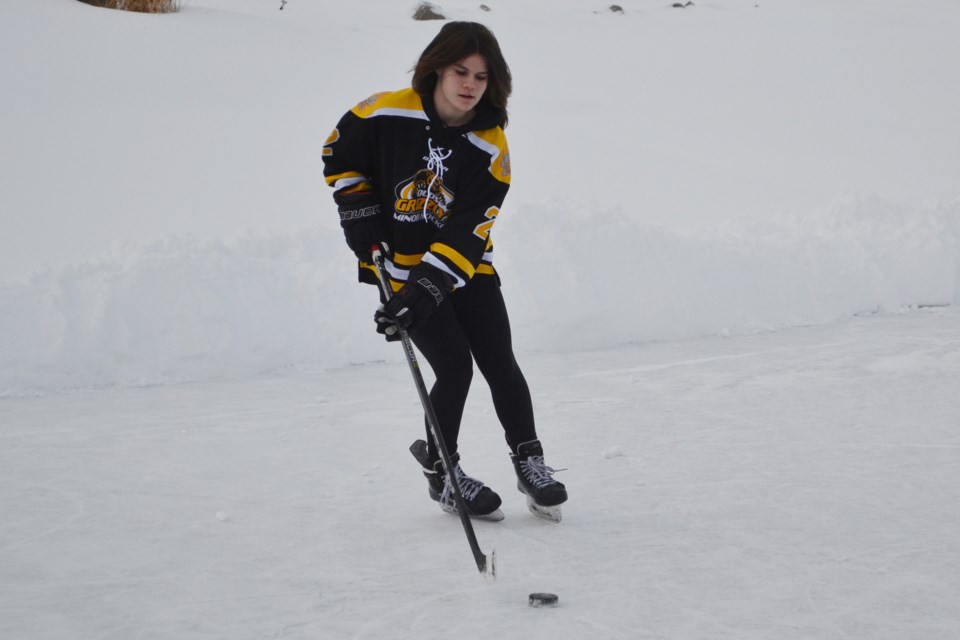 Jaecia Joyce has a little fun with the puck on Winter Lake in Olds. Doug Collie/MVP Staff

Jaecia, 13, is looking forward to that.

“I think it’s going to be really fun and good hockey."

Her mom, Theresa, and dad, Tim, are thrilled for her.

“We’re just very proud of her. Just her drive. She gets up every morning; she never complains,” Tim says.

“It’s going to be a great experience for her. I’m proud of her. Hopefully she does well, he says.

Jaecia began donning skates when she was only about two years old, going out on Winter Lake with her brother Colby (who made the Bantam AAA team in Red Deer this year). She began playing hockey about a year later.

Initially she was a goaltender and defenceman. But about three years ago, her parents urged her to decide on one position or the other because paying for two sets of equipment was just getting too costly.

“It’s fun and competitive,” she says.

She says she can take a hit and dish them out too.

So far, the only injury Jaecia has suffered is a charley horse.

Her immediate goal is to make the girls' Midget AAA hockey team in Red Deer.

She wants to become a surgeon specializing in sports medicine.

Jaecia says being the only girl on the team has never been a problem. She says the guys don’t bother her because they’re all friends.

“It’s never, ever been a concern, because that’s all she knows,” Theresa says.

“She’s always played hockey with these boys – whether it be on the pond or league hockey – and they’re like her brothers and they’re protective of her too.”

Overwater agrees with those assessments.

“She is a part of the hockey family on our team for sure,” he says.

Jaecia describes herself as a defensive defenceman.

She says the best part of her game is her ability to box out opponents in the offensive zone.

She says the weakest part of her game is getting more power behind her shots.

Tim and Theresa figure part of the reason Jaecia and Colby have done so well in hockey is that they’re both very driven, competitive people.

Theresa notes they’ve played on the same team every other year and those teams have virtually always won league and/or provincial championships.

Some day, Jaecia would like to play professional women’s hockey and is hoping a new women’s pro hockey league will eventually be started again.

The Canadian Professional Women’s Hockey League, which started up in 2007, disbanded last year.

Former female pro centre Hayley Wickenheiser is one of her idols.