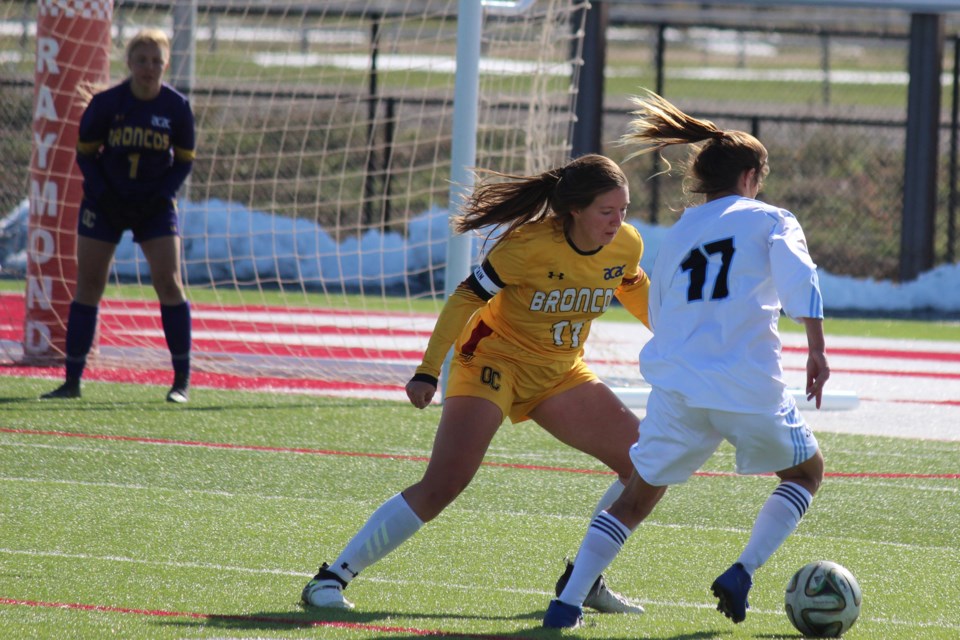 Katharina Oeltermann (11) defends against an opponent going for the goal. Noel West/MVP Staff

OLDS — Katharina Oeltermann came all the way from Germany to play soccer at Olds College.

She’s already been a standout in her first two years but is hoping to have an even better season in her final year next fall.

This past season, the 21-year-old centreback scored seven goals and obtained two assists, including two game-winning goals, for 16 points.

Those stats placed her sixth in the Alberta Colleges Athletic Conference (ACAC) south division, which is pretty impressive for a defender.

In her rookie season, Oeltermann scored two goals and got one assist for five points.

This past season, the Broncos finished the 12-game regular season in third place in the ACAC south division with a 7-4-1 record for 22 points, qualifying them for the playoffs in Sherwood Park.

Unfortunately, they were shut out 3-0 in the quarter-finals by the Concordia Thunder.

Oeltermann is disappointed the team didn’t go further, but pleased with her own progress.

“Last season, I was pretty injured, so I couldn’t play for the first few weeks.

“So this season was pretty good that I started pretty well, healthy, and just could improve myself from week to week,” she said during an interview with the Mountain View Albertan.

Oeltermann was recruited to the Broncos from Pattensen, a town of about 14,300 people near Hannover in the southeast part of Germany.

When she came to Olds a couple of years ago, Oeltermann was already suffering from an injury to her left leg. However, when she got here and started playing, she also pulled a quad muscle on her right leg.

“It was fine when I got here, but as soon as we started practising, like twice a day and seven days a week, it got really bad,” she said.

She said in theory that’s a two-year course, but she’s only taking three classes at a time to ensure time for soccer games and practices, so for her, it morphed into a three-year program.

Initially, Oeltermann was looking at studying and playing soccer in the U.S., but as she was about to sign, she received an offer from Olds College.

When she researched the school and the community, Oeltermann liked what she saw, because the size of the town and the surrounding agricultural land reminded her of her hometown and region.

She was also impressed with how big Canada is and how beautiful the mountains are.

But it’s been an adjustment — especially in the winter.

“Where I’m from it does not get that cold, and not that early,” she said.

“Getting used to that and then a winter that goes longer than six months. Sometimes that was really hard to adjust to, but I got used to it.”

Another adjustment has been the fact that soccer is just not as big a deal in this country as it is in Europe. And the level of play she has encountered isn’t as high as it is back home.

“I mean, Europe is pretty crazy about soccer and when you play soccer you’re really – yeah everyone’s like, hey, that’s pretty cool.

“And here it’s — the culture’s just very different about soccer,” she said.

Unlike most of her teammates, Oeltermann and her roommate from England follow professional soccer leagues in Europe.

“(Here) everyone’s really hyped about hockey. Hockey’s not as big in Germany, so I was like, ‘OK, I don’t even know the rules. I’ve heard about the NHL but I’ve never really followed it.' "

Oeltermann misses the bakeries and Christmas markets back home as well as her family. She has five siblings: three brothers and two sisters.

On the other hand though, she likes Canada, and is considering possibly staying here. Oeltermann likes the friendliness of people she’s met here.

“I’d love to go to university in Canada to study international management,” she said.

“Then I would love to start my own company, to work with children in Third World countries, to, like, give them an option to play sports and support that with education.”

Her goal would be to work with other athletes and help them get scholarships in North America or Europe.