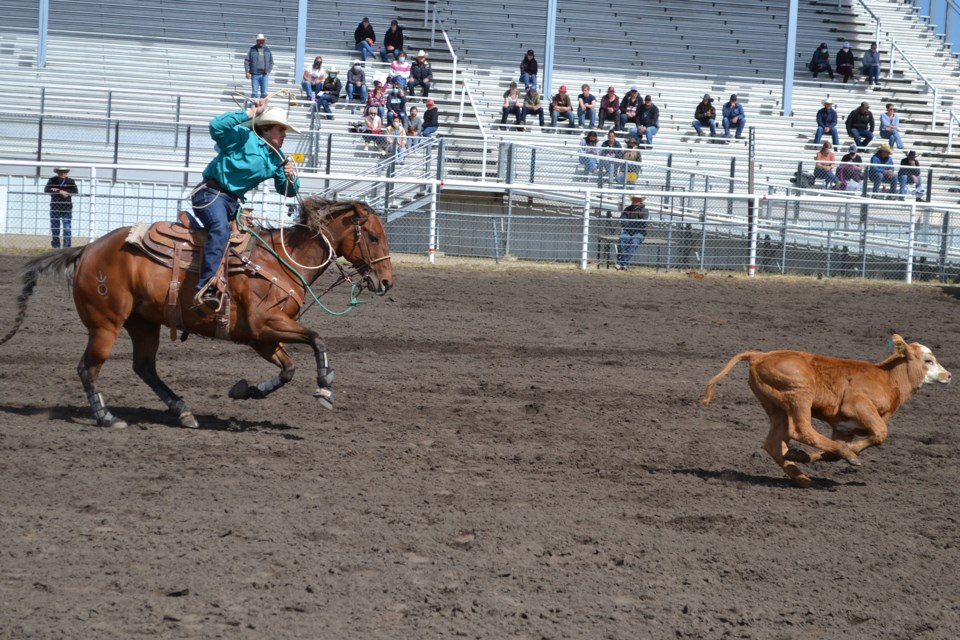 OLDS — Four local competitors have qualified for the National Rodeo Finals after competing in the Alberta High School Rodeo (AHSR) finals in Olds this past weekend.

The AHSR finals were held June 3-6 at the Olds Regional Exhibition grounds.

The National Rodeo Finals will be held July 18-24 in Lincoln, Nebraska.

The AHSR finals marked the end of the 2021 high school rodeo season in Alberta, which runs from April into June.

AHSR chair Patricia McKean of Cremona was happy with the way the finals went this year, despite the fact they were sometimes hampered by rain.

“So the kids, they’re cowboys and cowgirls and they’re tough. We’ve had all the weather here this weekend but everybody’s pushing through and just excited to be here,” McKean said during an interview.

“They worked hard to be here all year, and so this is their payoff and everybody’s enjoying it,” she said.

“It was a tough year. The kids were at the top of their game because it was something they were working for.”

She estimated that 20 to 30 volunteers helped stage the AHSR finals.

McKean said organizers worked hard to ensure the finals – and all rodeos this year – could happen by obtaining an exemption from Alberta Health Services (AHS).

She said organizers began working on that back in January, with help from Rimbey-Rocky Mountain House-Sundre MLA and Environment Minister Jason Nixon as well as representatives of AHS, the office of Chief Medical Officer of Health Dr. Deena Hinshaw as well as several rodeo associations and stock contractors.

McKean said they followed all of the COVID-19 protocols, including mask-wearing and social distancing.

“I believe we held 17 different rodeos across the province in our three districts and everything went very well; we had no COVID outbreaks, everybody did really good,” she said.

“We had some kids who had to turn down rodeos, due to close contacts through schools and stuff, but for the most part, the spring went really well. And again, everybody didn’t complain about rules, they were just happy to be rodeoing again.”

He said the crowd was very cooperative, although just a handful of people were wearing masks and being socially distant while The Albertan was there.

In an ironic twist, on Sunday, the rodeo announcer called on Christensen to move his vehicle because it was improperly parked.

Christensen took that well and laughed about it.

Eighteen-year-old Court Nugent of Cremona/Water Valley and Gordon Erickson, 17, of the Sundre area, were among the local competitors.

Nugent competed in tie-down roping on Sunday. He hurtled out of the gate after a calf and threw his rope, but the calf was too fast and evaded it.

"Tough luck,” he said afterward. “It’s luck of the draw some days and there’s nothing you can do about it. Just got to wait for the next one and be ready.

"He just kind of turned off and there’s nothing you really can do on them. Give credit to the calf. That’s their job, to try and get away.”

Nugent has been rodeoing for about eight years.

“I’m third generation on both sides of my family,” he said. “My grandparents on both sides have been rodeoing since they were kids.”

He also competes in team roping but didn’t qualify for provincials in that category this year.

"My dad, he was a calf roper and it just kind of it’s one of the more horsemanship-oriented ones I believe with the horse,” he said. "You've really got to have a good horse to really do good in this event.”

He also likes the difficulty of lassoing that calf and tying it down.

"Just a little more of a challenge in there," he said. “All the events are good, but calf roping just stands above it all for me.”

"My dad was a calf roper and just from being real little, just being a cowboy, I’ve always just admired the people in rodeo and just cowboys in general. So, it wasn’t really that hard for me to get into it, and my dad was pretty supportive of it,” he said.

He’s been competing in rodeo since he was about 10 years old.

“I rode steers in pro and stuff before, and now I’ve moved on to bulls and it’s been pretty good,” he said.

When asked why he likes riding bulls so much, he said, “I don’t know. It’s just the thrill of it I guess – the adrenaline.

“You watch them big beasts come in the chute and it makes everyone else scared, but if you’re pumped up to ride them – everyone else thinks you’re crazy I guess.”

Over the years – and during last week’s finals – Erickson has suffered several injuries.

"I broke my hand and just a couple of injuries,” he said. “You get stepped on. Like last night, I got stepped on quite a bit. But yeah, no, you’ve just got to keep going on.”

Asked if injuries like that intimidate him, Erickson said, “Well, a little bit I guess at some times. But you just keep going on – that’s just to be a cowboy.”

Both Erickson and Nugent plan to make a living competing in rodeo.

Nugent said that might even mean enrolling at Olds College.