Junior curling coach Heather Budd says the first junior curling bonspiel organized by her group was such a success they're already planning to hold another one next year.
Mar 22, 2019 11:19 AM By: Doug Collie 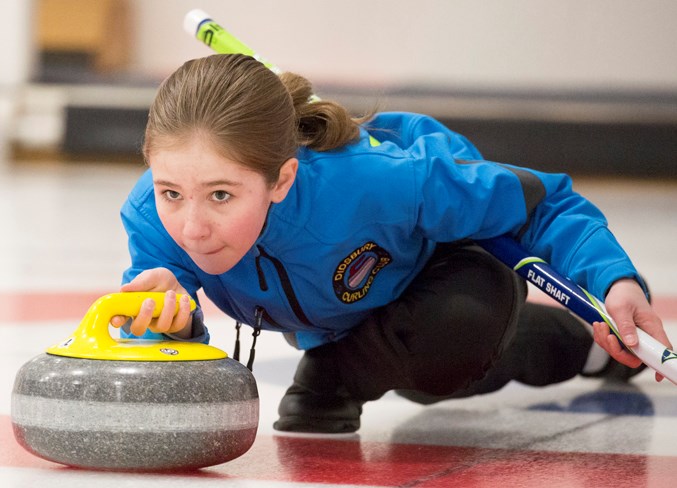 Lexi Jardine throws a rock during a junior curling bonspiel at the Olds Curling Club.

Junior curling coach Heather Budd says the first junior curling bonspiel organized by her group was such a success they're already planning to hold another one next year.

A total of 15 teams participated in the event which ran Friday night March 8, and Saturday, March 9 at the Olds Curling Rink. Originally 16 teams were scheduled to participate, but one dropped out Saturday.

Participants ranged in age from eight to 18. In addition to seven teams from Olds, curlers came from Three Hills, Didsbury, Sundre and Cremona.

They were divided into two divisions. There were six teams in U-18 and nine in U-14.

The A winners in the U-18 division were team Rauhala from Didsbury which consisted of Kaleb Rauhala as skip, Hunter Reese as third, Chase Rauhala as second and Donovan Rauhala as lead.

The U-18 B winners were Team Dougan from Olds which consisted of Shaun Dougan as skip, Riley Franke as third, Kael Clouston as second and August Marks as lead.

The U-18 C winners were Team Mogck from Olds which consisted of Parker Mogck as skip, Kobi Chant as third, Emma O’Donahue as second and Noah Korver as lead.

The A winners for U-14 were Team Foshaug from Didsbury which consisted of Brenna Foshaug as skip, Lexi Jargdine as third, Lucas Wilson as second and Gideon Lundeen as lead.

The U-14 B winners were Team Keiver from Three Hills which consisted of Ty Keiver as skip, Riley Keiver as third, Alexa Rosgen as second and Rowan Smithson as lead.

The U-14 C winners were Team Chant from Olds, which consisted of Colin Chant as skip, Wyatt Raven as third, Kenadie Weiss as second and Cash Lesiuk as lead.

A few members of the College Bronco Curling club came out Saturday afternoon and participated with the junior curlers in a draw to the button. The winner was Levi Reese of Didsbury.

Budd co-chaired the organizing committee along with Colin Muller.

She says planning for the tournament began about a year ago.

"We wanted to host our own, because we'd gone to a couple of the other communities," she says.

"(We had) no idea how many teams we were going to get and we actually got more than we thought, so it was a really good turnout for a first (tournament)."

Budd says there was a lot of good competition, especially at the high school level.

"Most of my kids are first-years, but they had a riot. So that's the most important thing to me at this point when they're learning everything," she says.

She was pleased by the enthusiasm of the curlers.

Budd says organizers have some ideas on how they want to change things for next year's junior bonspiel.

One aspect is to ensure there are an even number of teams — preferably in multiples of four.

"We've learned that if we have numbers of denomination of fours then it will be easier to do the draw sheets; we had no idea about that," Budd says.

She'd also like to see more parents help out.

"There were just a few of us, so if we can get more parent volunteers then it will run a bit smoother, I think," Budd says.

"There were about seven of us, including people doing raffle sales and all that kind of stuff. There were basically three of us doing promotion and getting sponsors."

Budd was pleased by the amount of sponsorship the tournament attracted.

"We had about 35 companies donate towards this first year. I was really impressed and really humbled by everyone's support for it," she says.

"We would like to give a giant thank you to all the companies and individuals who have donated cash, gifts in-kind or just their time. We couldn’t have done it without them."