An attempt by Reeve Paddy Munro to put a stop to the offsite levy process for Mountain View County's Highway 2/27 development was defeated last Wednesday in a 4-3 vote.
Aug 30, 2011 1:00 AM By: Mountain View Today Staff 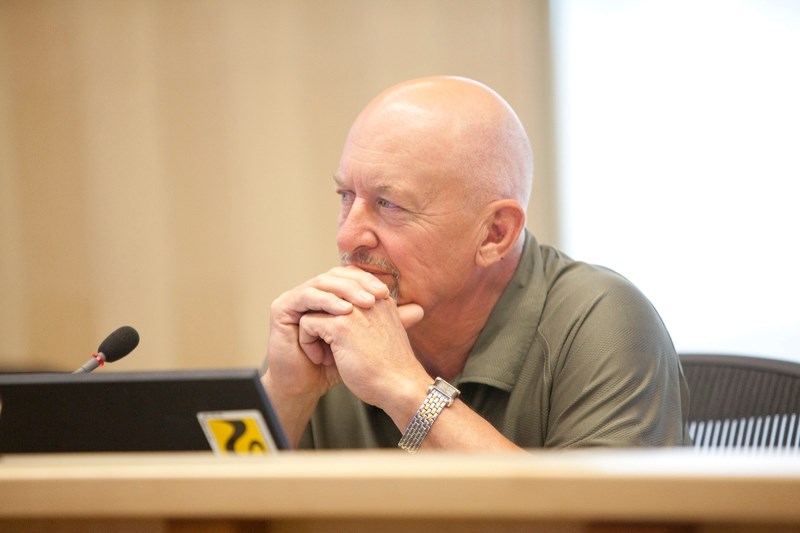 Deputy reeve Bruce Beattie said he would support reopening the 2/27 Area Structure Plan but found it confusing that some councillors wanted to stop a process they had voted for only weeks earlier.

An attempt by Reeve Paddy Munro to put a stop to the offsite levy process for Mountain View County's Highway 2/27 development was defeated last Wednesday in a 4-3 vote.Council voted on July 20 to hire a consultant to draft an offsite levy bylaw that will set fees for developers at 2/27 to cover the estimated $45 million needed to bring in piped water and sewer services. The decision to proceed followed a discussion during which a majority of councillors said they did not support running piped services to the area.Last week, Munro said council erred back in July.ìI'm against the offsite levy process because we are committing ourselves to high-density development,î he told council.ìI'd like to see the process stop because we're not in favour of high density and will be committing some future council to it.îInstead, Munro said, council should involve the public in the discussion and then come to a decision on the future of the area.Div. 1 Coun. Kevin Good agreed the offsite levy ìis a back-door approvalî and ìpseudo blessingî for high-density development.ìIf we don't want to head that way as a municipality we shouldn't take that step.îCouncil has to make a decision on the area's future, Good added.ìIt's unfair to residents, it's unfair to developers to just drag it out for long periods of time.îDiv. 2 Coun. Trish McKean said she didn't want to make high densities ìassumableî but as a new councillor, she added, she would like to hear more public input.Div. 3 Coun. Duncan Milne concurred with McKean, saying he would like to hear from ìeveryone involved,î while Div. 5 Coun. Bob Orr echoed Good in saying the county needs to have clear policies in place.Speaking next, Div. 4 Coun. Bruce Beattie described the comments as ìinterestingî and ìall quite similarî but said he was confused since council had voted two weeks ago to hire a consultant for $75,000 to draft the offsite levy bylaw.ìThere was a very extensive process of consultation for the area structure plan. If we have to reopen the ASP, I have no problem with that,î Beattie said.Noting there had been significant investment in the area, Beattie asked what would happen to existing businesses, such as the Olds Co-op Cardlock, ìif we just walk away from it.îThere are many options for piped services to the commercial sites, Munro responded.And since developers have indicated they need a high-density residential component to make the overall development economically feasible, ìwe're talking potentially another Town of Didsbury out there,î Munro said.ìThere's no way this council will approve that density of development.îDiv. 7 Coun. Al Kemmere, saying the discussion had the appearance of ìbeing orchestrated,î took issue with Munro's last statement.ìYou just said this council will not go forward with it. Then why even have a meeting?î he told Munro, asking if council was going to reopen all the ASPs.ìCouncil just made a decision two weeks ago to go forwardî with the offsite levy bylaw ìand now we're going to throw it out without any proper process,î Kemmere said.ìI'm frustrated with what appears to be back-door politics.îMunro said council has been struggling with the 2/27 development ìfor 10 months and we're no further ahead.î And he said he agreed that the Southeast Sundre and McDougal Flats ASPs should be reopened, ìbecause nobody who lives there agrees with what the last council did.îHis own experience with the Southeast Sundre ASP was ìterrible,î he said.ìThe community said one thing and planning came back with density bonusing that was 100 per cent against what the people wanted. I don't trust the ASP process one bit.îCAO Tony Martens said he too doesn't support the high densities proposed for the 2/27 area.ìCouncil has to make a decision,î Martens said. ìA public meeting is fine Ö but I think it should be part of the ASP process.îHe added that even if council chooses not to extend wastewater services to the area, he hopes it will continue to support moves to provide access to piped water.It was late in the discussion when staff confirmed that the offsite levy bylaw was proposed for the entire 2/27 ASP area, not just existing development, as at least two councillors had mistakenly believed until then.When the vote was called, Munro, Good and Orr voted in favour of stopping the offsite levy process, but McKean, Milne, Beattie and Kemmere voted against Munro's motion, which was defeated.