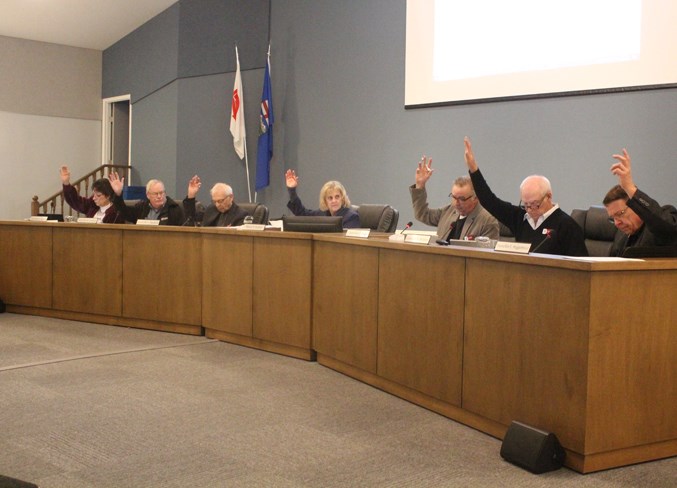 Didsbury councillors vote on a motion during the Oct. 8 regular council meeting.

DIDSBURY - At its regular meeting on Oct. 8, Didsbury council carried a motion to amend the land use bylaw.

Interim CAO for Didsbury Tony Martens said the town recently completed (June 2019) an update to the land use bylaw but realized after the fact that a couple of items had been left out.

"All they did was bring those forward from the old land use bylaw those items that should've been brought forward to the new land use bylaw but weren't," said Martens. "They were missed in the new version. So they were added on."

Martens said that a land use bylaw is a "living document" meaning it is updated from time to time.

"You don't want to have to do a major rewrite," he said. "It's a major undertaking. It's a lot of work. You're better off to keep them current and not let them get old."

In other council news, council received a report from Coun. Bill Windsor regarding the water and wastewater rate structure.

"Administration will take it back and review and compare the numbers that Mr. Windsor had to the numbers we had," said Martens. "Council also wants us to compare it to Stony Plain and Sherwood Park because those municipalities do their rates the same as Mr. Windsor proposed in his report."

Council carried a motion to authorize Watt Consulting Group to execute a revised traffic impact assessment (TIA) for the current land use designations within the Shantz Village subdivision.

The background information provided to council stated that Shantz Village was originally designed and designated as industrial land. It was determined that a mixed use was more desirable.

The Buy Low development permit has been issued and the developer is required to update the traffic impact assessment.

The cost for the new traffic impact assessment is $6,300 plus disbursements and GST.

"A TIA is typically done when you're potentially changing traffic patterns because you have a different type of development so you'll have different traffic that will impact roadways around there," he said.

Council approved $25,411 from the recreation facilities reserve to replace the wheelchair lift at the Didsbury Curling Rink.

In a 4-3 vote, council carried a motion to support the Olds Rotary Club's "Take me Out to the Ball Game" fundraiser by donating $250 to the event. The fundraiser is set to raise money to go towards Rotary Athletic Park in Olds.