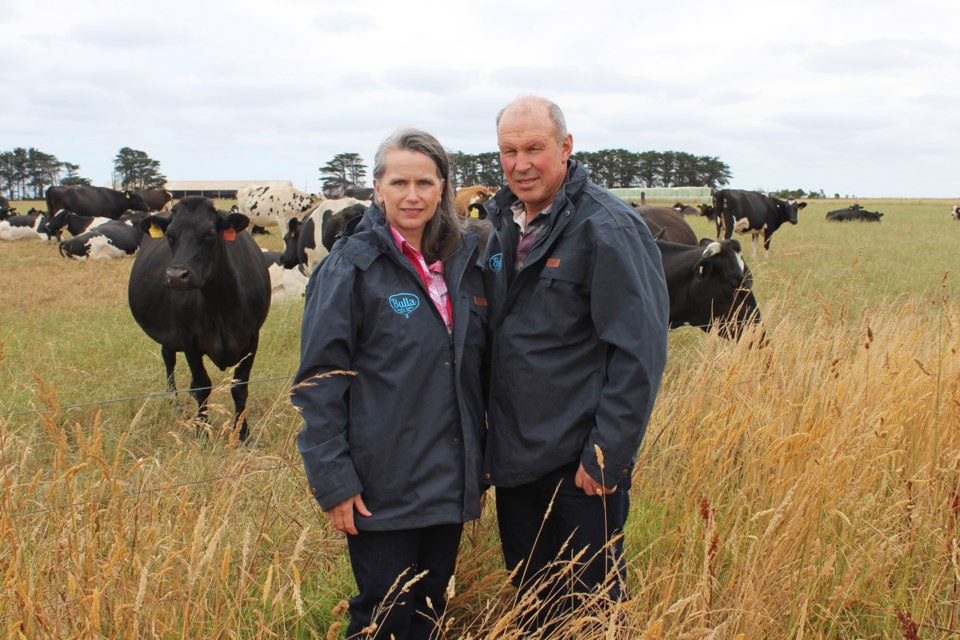 Jessica Fullerton, left, seen here with her husband Peter on their dairy farm in southeastern Australia, has kept in close contact with family in Spruce View while raging fires continue across much of the country. Submitted photo

INNISFAIL – As the world watches the horror and destruction of wildfires ravaging much of Australia in recent weeks, a former Spruce View resident and her family are perilously close to the terrifying inferno that has gripped the world.

“We are watching the fires along with the rest of the world in grief and awe and praying for a rain that is not forecast,” said Jessica Fullerton in an email. The former area resident, who is currently living with her husband and children in Victoria, a province in the southeastern part of Australia, moved there 14 and a half years ago. The family owns a dairy farm near Warrnambool, about 260 kilometres southwest of Melbourne. “While we are in no danger here presently, we know from past fire seasons the ferocity and non-discriminate nature of bush fire.

"Part of the risk of living in rural Australia is catastrophic fire,” she added. “Total fire ban days are taken very seriously.”

The wildfires that have been spreading across the country for several weeks are believed to be the worst in Australia’s history. Twenty-four people have died, hundreds of homes have been destroyed, along with devastation to millions of acres.

Although there is no cause for evacuation for Fullerton and her family or the area at the moment, she understands the fluidity of the situation, and if necessary, is fully prepared to evacuate in the coming days.

“The CFA (Country Fire Authority) is a big part of life in Australia. Our escape route, if needed, would be a five-minute drive to the ocean,” said Fullerton. “We have two ways of getting there.”

Fullerton shared growing concerns she and others living in Australia have had to deal with over the escalating uncertainty caused by this year's horrific fire season.

“These days the fires dominate the news and they come up in every conversation. Everyone is connected somehow to someone, somewhere in the fire zones,” said Fullerton. “People are concerned for their family and friends, they’re devastated for the loss of life, and they’re fed up with those who insist on using this tragedy as a platform to score political points.”

Australia's government under Prime Minister Scott Morrison has faced heavy criticism for failing to respond more quickly to the growing crisis, and for downplaying the need to address climate change, which experts maintain has played a significant role in energizing the wildfire.

Back home in Spruce View, family members, including her mother, brother and sister-in-law, are keeping a close eye on the situation that continues to worsen.

"I messaged my nephew, my niece and Jessica a few days ago because another family member was anxious about it,” said Shauna Mundell, Fullerton's sister-in-law.

“We’ve been concerned about their safety, if those wildfires get any closer to where they are and out of control near where they are,” she added. “It’s an awful situation for the whole country, obviously -  for people, their livelihoods, their homes, and their animals. It’s awful to watch that happen.”

Fullerton relayed details in a message to her sister-in-law about the current conditions, including scorching hot temperatures into the 40s (Celsius) and several, widespread power outages, leaving thousands without use of air conditioning or fans.

She and her family know they are a few of the fortunate ones, who have not yet had to evacuate or lose their home or farm to the wildfires.

They are thankful for outside help from other countries and will continue to stand with their fellow Australians and pray for an end to the devastation.

“While news coverage makes it seem that the whole country is on fire, we are not in imminent danger here in Victoria’s southwest coast,” she said. “We do understand, though, this is early in the piece, (and) there is still a long summer ahead.

“We stand with those humbled and grateful for the tremendous support shown to Australia in her greatest hour of need, and we simply ask the watching world to pray,” Fullerton concluded.