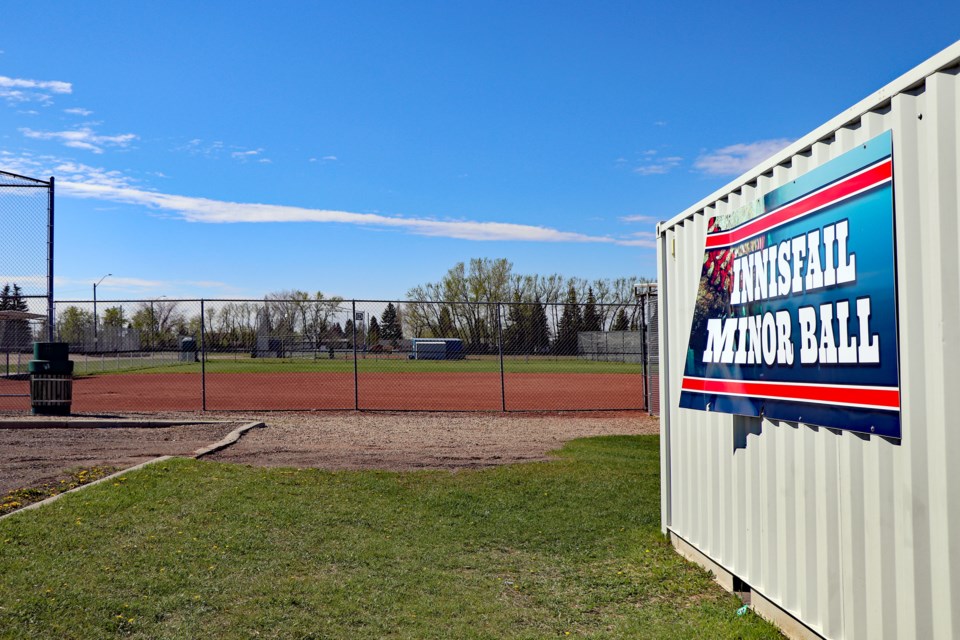 The sports fields near the Innisfail Aquatic Centre where the town wants to begin regulating camping for tournaments. The proposal is for 15 sites by the aquatic centre and 25 near the Arena. Johnnie Bachusky/MVP Staff

INNISFAIL – There will soon be a policy in place to regulate overnight camping on specified town lands for out-of-towners coming into the community for sport and recreational events.

At town council’s May 17 special meeting, a draft policy was introduced by Meghan Jenkins, the town’s director of community services.

“This has been a bit of a challenge. Camping has been occurring at our recreation facilities in conjunction with soccer, mostly baseball, lacrosse, swimming and then the shuffleboard tournament as well,” said Jenkins.

“But we really don’t have a process. We don’t have any kind of rules or regulations in place, so that has been the intent of this policy.”

Council was told the new policy, which was earlier presented to the town’s Community Services Standing Committee, is designed to limit a maximum number of campers to 40 on arena grounds, 15 east of the curling club and 25 to the northside of the arena.

As well, eight will be allowed by the aquatic centre.

Jenkins told council there won’t be hook-ups for water or electricity. As well, all activities must comply with town noise and nuisance bylaws.

Camping in tents or fabric structures will not be allowed.

She emphasized camping will be permitted in the two designated locations only with an associated facility booking made by an event organizer through the town.

“People can’t camp here unless there is something going on, and the camping coincides with the start and end of those facility bookings. It can only occur in designated areas,” said Jenkins, adding a camping permit must be obtained by an event organizer.

“Really, the policy places the onus on the event organizer if they wish to offer and coordinate this camping.”

She said the policy asks for registration of campers, as it will give the town contact information for who is on site. As well, council was told an approved camping permit must have proof of insurance for the organization or event that names the town as an additional insured with a minimum $2,000,000 general liability.

As for the fee to get a permit, Jenkins said at this time that issue has not been settled but added it will go into the Community Services Rates & Fees Bylaw.

She told council it will likely end up being just a flat fee, and not necessarily an escalating one that depends on the number of campers attending both town-owned locations.

“It (permit) would put it on the radar of municipal enforcement, parks staff and everybody would know the permit was allowed and there were things to be going on,” she said. “It forces the event organizer to keep us in the loop a little bit on what their plans are.”

Council approved Jenkins’ proposed camping policy as information. Jenkins will be back to council early in June to seek final approval.