Number of games played per team expected to be drastically reduced
Nov 24, 2020 6:00 AM By: Johnnie Bachusky 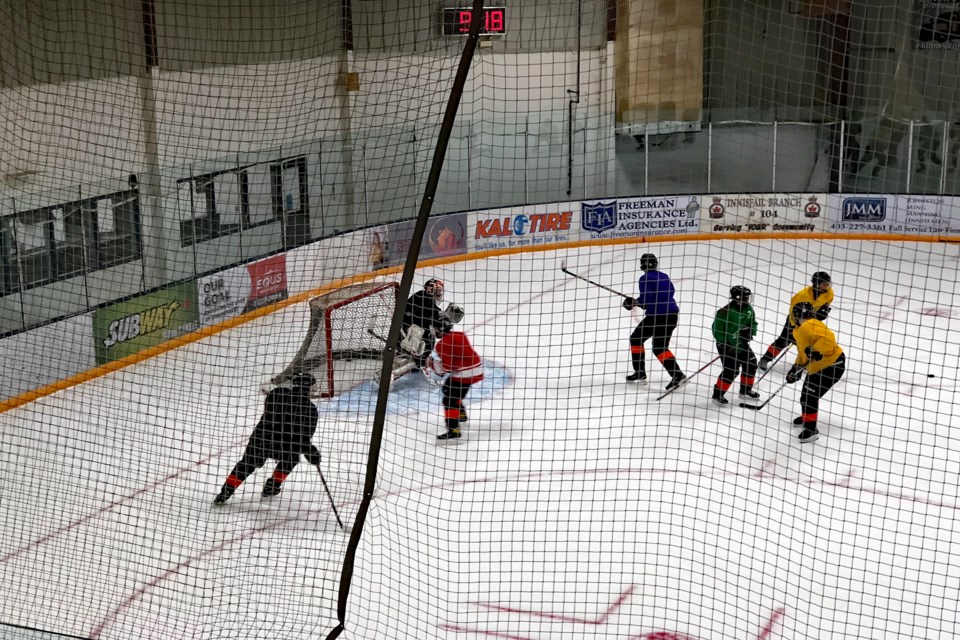 The U18 A team at practice during the evening of Nov. 17 at the Innisfail Arena. Regular season play for the Innisfail Minor Hockey Association began on Nov. 6 with strict COVID-19 pandemic guidelines. Submitted photo

INNISFAIL – Hundreds of hockey kids are now in full swing playing out their dreams on the ice but it will be an unforgettable season for the challenging pandemic guidelines everyone must follow.

The 2020/21 season from now and until March will also feature less games, from a typical 30 to 35 to just a third of that. The year of the COVID-19 pandemic has wiped out all tournament play.

“I can’t see that changing. I think we are going to be lucky to be in that eight to 10 range,” said Bruce Rafuse, president of the Innisfail Minor Hockey Association (IMHA). “It’s absolutely a different season than most seasons as you can appreciate. The rules and stuff are there for a reason.

Rafuse said league games started on Nov. 6. He said 243 kids registered in seven levels this season, from the youngest U7 to the oldest U18 level, which he added is “pretty consistent” compared to non-pandemic seasons. He said all divisions from U9 and up play in the Central Alberta Hockey League (CAHL).

As for handling the pandemic, the IMHA has plenty of rules and guidelines to navigate through. There are the ones from the province, others from Hockey Alberta and those from the Town of Innisfail, as well as the league’s own guidelines.

Rafuse said teams play against others in the same league but not necessarily from the same community. There are teams from rural Central Alberta communities but not in any of the COVID enhanced zones identified by the Alberta government.

Rafuse added IMHA teams will not be playing any teams from municipalities in any enhanced zone, like Red Deer, Calgary or Edmonton, until their pandemic status is deemed to be safer.

He said for safety against the pandemic, the league has set up a cohort system, with all teams in cohorts of 50 or less, and with some having two teams per cohort, and others three or four - depending on how many players each team has.

“It’s a quick in an out and we are sharing a dressing room because we are in a cohort but no parents are allowed in. It is fairly strict that way,” said Rafuse, adding the Town of Innisfail has authorized two spectators per player, and only team officials can be in the dressing rooms with players.

As for face mask guidelines, Rafuse noted that as of Nov. 17 the Town of Innisfail has not passed a bylaw on mask use, which the league has followed.

“What the town has said and what we are echoing is that we strongly encourage the use of masks if you can not be socially distanced six feet or more. If you are in a cohort the people on the team can be in a dressing room. I wear my mask in the Arena,” he said. “As far as parents who work in the time box or in the clock they have to be masked up because they come into direct contact with players who are in the penalty box. Coaches who are on more than one team have to be masked as well.”

He said he’s personally a strong supporter of face masks, but emphasized there is no bylaw in the community to regulate them. However, if there is any risk to player safety the league can apply its own guidelines.

“If you are a parent in a time box, you have to wear a mask. That’s non-negotiable,” said Rafuse.

“We want these kids to be able to continue playing the game, and bigger than that, we want our community safe,” he added, noting the league’s firm stance about not playing any team from an enhanced COVID zone. “We have to and need to follow the rules to keep our community safe. If we can keep our arena safe and free of COVID then that is good for everyone in our community.”