Dozens of slingshot drivers recently got their motors running and headed out on the highway looking for an adventure that brought them to Sundre.
Aug 7, 2018 10:00 AM By: Simon Ducatel 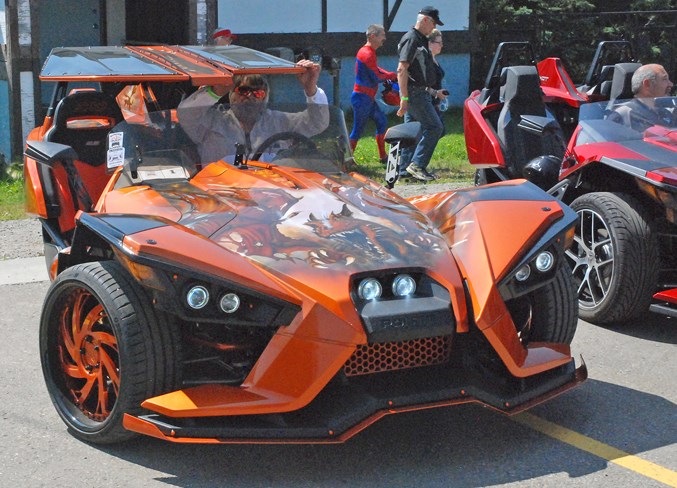 Harvey Adams, who drove out from La Porte, Ind., for the second annual Sundre Slingfest, lowers his Polaris Slingshot’s sun cover on Saturday, July 28 at the Sundre Pioneer Village Museum as the group of several dozen riders prepared to embark on an excursion to Banff following a tour around Bearberry earlier that morning.

Dozens of slingshot drivers recently got their motors running and headed out on the highway looking for an adventure that brought them to Sundre.

The second annual Sundre Slingfest, which was held July 27-29, brought out about 40 Polaris Slingshots, including several from the U.S.

“What an epic trip — just awesome,” Jared Henderson, who drove about 4,800 kilometres one-way from Greenville, S.C., said on Saturday, July 28 during an interview at the Sundre Pioneer Village Museum. The museum hosted a late morning-early afternoon pit stop after the group completed a tour of the Bearberry area.

The skies were clear as the sun beat down hard, and co-organizer Shawna Brackley, who owns and operates Wagons West RV Park & Storage with her husband and slingshot enthusiast Mark, said “we couldn’t have asked for any better.”

At last count when she spoke with the Round Up, there had been about 30 slingshots, but more kept pulling in as the morning went on, she said.

“It’s a bigger showing than we expected,” she said.

“It’s an exciting scene in Sundre for sure.”

Many riders who came from out of town to explore the area were already talking about making plans for return trips later this summer, she said.

“So that’s repeated visitors to Sundre and exposure as far away as South Carolina — you can’t ask for a bigger marketing reach.”

Just about everybody who took part during last year’s inaugural event made sure to book the time to return this year, she said.

“Almost everyone from last year came back, and then some — we almost doubled from one year to the next.”

She attributed a substantial portion of that success to grant funding made available through an application for the Town of Sundre’s economic development initiative fund, which provided a $1,500 infusion to promote the event online as well as on the radio.

The partnership with the museum also went a long way towards accommodating and improving the slingfest, she said.

“They are amazing — they opened up the whole museum to us so everyone could come in. It’s a beautiful facility, so it’s good to bring exposure to them as well.”

While there was no formal tracking of visitors who stopped by, Brackley said organizers estimated about 130 people came out to see the slingshots.

“We love Sundre," she said, adding that introducing and diversifying local annual events helps to make a great town even better.

Mark, who in 2015 embarked on a lengthy slingshot road trip to the U.S. that he chronicled online, capturing the imagination of people like Henderson, said the event’s turnout was great to see and that he was glad that several people came from south of the border.

“We didn’t have any Americans last year,” said Mark.

“They saw how it all turned out and they all wanted to come this year — and they did.”

Following the excursion around Bearberry and the break at the museum, the group planned to hit the road east of Sundre and went south down the Cowboy Trail, or Highway 22, to Cochrane, then west along Highway 1A to reconnect with the Trans-Canada to explore Banff as well as tour the Lake Minnewanka loop before likely refuelling in Canmore and heading home, he said.

Visit the slingshotinfo.com forum to learn more about the online community and fellow members’ adventures and stories.

Henderson, a married father of two who serves in the U.S. navy, said his path originally intertwined with the Brackleys through this network, and that he had been looking forward to and planning to attend the slingfest for the past several months after being unable to attend last year.

“It’s tough getting the time off work, and it’s a long haul,” he said.

Over the span of six days — one of which was spent visiting a friend along the way — Henderson said he covered 4,800 kilometres of road, and that he expected the return trip, which he planned fewer stops for, to account for more than 9,000 kilometres.

“I learned a lot about the machine and how to pack for it, and what I can do.”

Along the way meeting up for the first time with a few members of the online community who also came to Sundre, Henderson said several other Americans came up from Indiana, Wisconsin, Minnesota, Oregon and Washington State.

“I was blogging the trip as we were going up,” he said, adding other people came out of the woodwork to express interest.

“People are getting ideas and taking notes.”

Having been involved in a number of groups for biking, trucking, shooting as well as outdoor, navy and church communities, Henderson praised the online slingshot forum for offering a solid support network.

“It’s probably the best group I’ve ever been a part of as far as helping each other out and sharing ideas.”

Finally arriving in Sundre and meeting the Brackleys was great, he said.

“I tell you, Mark and Shawna are a couple of personal idols. We were just absolutely tickled to come up here and meet them — they’ve been nothing but gracious hosts.”

Henderson hopes to at some point return as time allows.

“This was a pretty epic trip — probably up in my top-three road trips ever. And certainly, for the slingshot, the top one; it’s the longest one I’ve ever done.”

The Brackleys already have their sights set on the third annual Sundre Slingfest, and hope to see the event continue to grow.

“Sturgis, watch out, here we come!” said Shawna, referring to “the Harley Davidson rally mecca of the world” that put on the map the once little-known South Dakota community.

“Sturgis was a small little town that no one had ever heard of, and they started something like this.”

The Sundre Slingfest is also unique to this part of the country, said Mark.