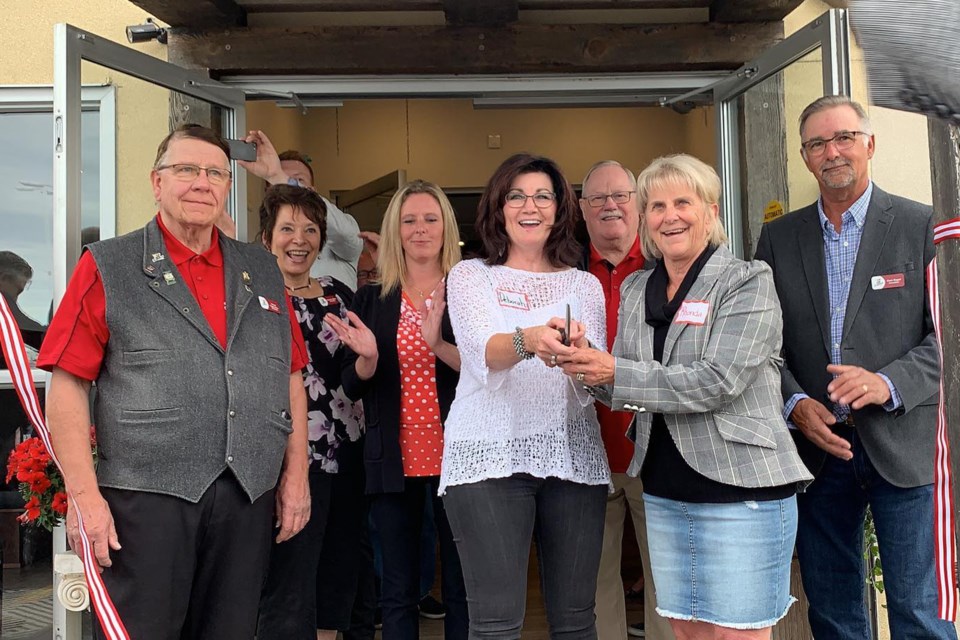 Members of council gather for an official ribbon cutting during the grand opening of International Grill on Sept. 3. Coun. Curt Engel, right, and Town of Didsbury Mayor Rhonda Hunter, second from right, have apologized for not wearing masks. Photo courtesy of www.facebook.com/Theinternationalgrill.ca/

DIDSBURY — The town’s mayor has apologized to the community after being admonished for not taking precautions to help prevent the spread of COVID-19 during a recent restaurant grand opening she attended in an official capacity.

Mayor Rhonda Hunter opened the Sept. 8 council meeting with an apology for “regretfully” not putting on a mask when she was unable to physically distance from others while gathered outside International Grill at the Reimer Plaza for a ribbon cutting ceremony on Sept. 3.

“It was a bad decision on my part and I extend my apologies for this error in judgment,” Hunter said during the council meeting held via Zoom.

After pictures of the grand opening event appeared on The International Grill’s social media account, a poster commented about the lack of COVID-19 precautions being taken by those gathered for the photo op.

“So you violate the Chief Medical Officers (sic) orders.. No masks, no social distancing.. Funny they managed to follow all the rules, when opening the new Costco in Tsuut’ina,” said the post.

A public health order remains in effect requiring anyone attending an indoor or outdoor location who are not members of the same household or cohort to maintain a minimum of two metres distance from every other person.

The order is not contravened if a person acts in compliance with any guidance established by Alberta Health regarding physical distancing, including wearing masks.

Hunter said in addition to “a very angry post,” she received a call about it from a concerned resident.

She was joined in the photo op that day by other members of council including Dorothy Moore, Erhard Poggemiller, Mel Crothers and Curt Engel.

Crothers asked Hunter during the meeting whether other members of council should be apologizing.

Hunter responded by reiterating her position and said it was “up to each individual councillor to make that decision for themselves.”

Coun. Engel said he “probably should have had a mask on” when “bunched together” for the photo op but said he believed all protocols were being followed.

"But my understanding is that if you’re going to be in the proximity of somebody for approximately 15 minutes that’s when a mask is probably a fair amount of importance,” he said. “But if anybody was offended by the fact that I didn’t have one on, I too apologize.”

He added that they were able to physically distance after the photo op.

Didsbury readying for the winter weather that lies ahead
Oct 28, 2020 6:00 AM
Comments
We welcome your feedback and encourage you to share your thoughts. We ask that you be respectful of others and their points of view, refrain from personal attacks and stay on topic. To learn about our commenting policies and how we moderate, please read our Community Guidelines.