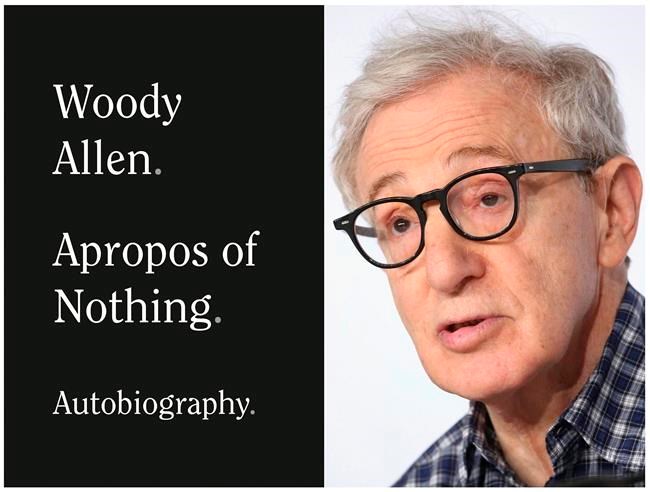 NEW YORK — A memoir by Woody Allen, for years and once thought unpublishable in the #MeToo era, is coming out next month.

Grand Central Publishing, a division of Hachette Book Group, announced Monday that the book is called “Apropos of Nothing” and will be released April 7.

“The book is a comprehensive account of his life, both personal and professional, and describes his work in films, , television, nightclubs, and print,” according to Grand Central. “Allen also writes of his relationships with family, friends, and the loves of his life.”

Financial terms were not disclosed for the book, which Grand Central quietly acquired a year ago, and a spokesman declined to provide further details about the book’s contents. In addition to the U.S., “Apropos of Nothing” will be released in Canada, Italy, France, Germany and Spain, followed by releases in “countries around the world.” Allen will do “several interviews” for the book, Grand Central announced.

The 84-year-old Allen is an Oscar-winning filmmaker, known for such works as “Annie Hall” and “The Purple Rose of Cairo,” and is among the most influential comedians of his time. But allegations by daughter Dylan Farrow that he molested her as a child in the early 1990s have effectively idled his movie career in the U.S. Amazon Studios backed out of a production and distribution deal with Allen, and numerous actors have said they won’t work with him anymore. His “A Rainy Day In New York” was released in Europe last year but not in this country. His current production, “Rifkin’s Festival,” starring Christoph Waltz and Gina Gershon, was shot last summer and is seeking distribution.

Allen has denied any wrongdoing, and he was never charged after two separate investigations in the 1990s. But Dylan's allegations have received new attention in the #MeToo era.

An Allen memoir nearly came out more than a decade ago. He had reportedly reached a multimillion-dollar deal with Penguin in 2003, but changed his mind. In 2018-2019, several publishers, citing #MeToo concerns, reportedly rebuffed an Allen representative who was seeking a deal for his memoir. But according to a Grand Central spokesman, a deal was reached in March 2019 after Publisher and Senior Ben Sevier read a completed draft of the book.

An Allen memoir once seemed the most obvious of publications. He has had a celebrated career as a performer and director, and is known for wordplay and one-liners. He has won three Academy awards for his screenplays and has been a published writer for decades, his comic essays appearing in The New Yorker and elsewhere. His previous books include the essay collections “Without Feathers” and “Getting Even.”

Allen's agreement with Hachette means he shares a publisher with one of his literary heroes, J.D. Salinger, and one of his biggest detractors, his son Ronan Farrow, whose “Catch and Kill” was released last year by the Hachette division Little, Brown and Company. Farrow won a Pulitzer Prize for his #MeToo reporting on producer Harvey Weinstein, and for years has been estranged from his father, as is Ronan’s mother, Mia Farrow, who starred in “The Purple Rose of Cairo,” “Hannah and Her Sisters” and other Allen movies.

This fall, a division of Macmillan will publish Dylan Farrow’s debut novel, “Hush,” billed as a “powerful feminist fantasy full of surprising insights.”

Biden signals sharp shift from Trump with Cabinet picks
Nov 23, 2020 5:46 PM
Comments
We welcome your feedback and encourage you to share your thoughts. We ask that you be respectful of others and their points of view, refrain from personal attacks and stay on topic. To learn about our commenting policies and how we moderate, please read our Community Guidelines.