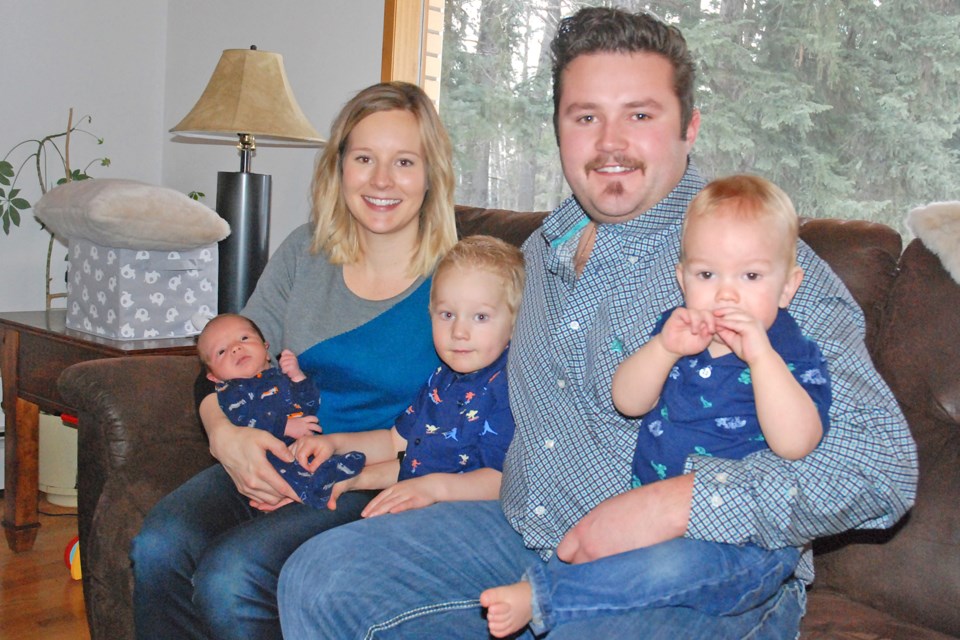 Brittney and Dale Aldrich, who live near Bergen, recently welcomed their third son, Wallace, into the world. Delivered on Saturday, Jan. 18 at the Sundre Hospital and Care Centre without complications weighing about 3.6 kilograms, he joins his brothers Archie, 3, and Lou 1. Simon Ducatel/MVP Staff

SUNDRE - Although arriving a little later than originally anticipated, Sundre’s New Year’s baby came into the world without any complications.

“He was eight days overdue so we did get induced, but everything went well,” said mom Brittney (née Fiselier) Aldrich on Tuesday, Jan. 28 during an interview at her and husband Dale’s home near Bergen.

Wallace Christopher Aldrich was born healthy weighing in at 3.6 kilograms (seven pounds, 15 ounces) on Saturday, Jan. 18 at 2:54 p.m. at the Sundre Hospital and Care Centre, continuing something of what seems to have become a family tradition.

“All five of us were born at the Sundre hospital,” said Dale, referring not only himself and Brittney, but also their other two sons, Archie, 3, and Lou, 1, who were playing nearby.

While Dr. Michelle Warren is their family doctor, Dr. Carly Crewe oversaw the delivery. Everything went smoothly, lasting about four hours, and following a day’s rest in hospital, the family returned home the next day.

“The Sundre hospital is a great place to deliver a baby. From the nurses to the doctors there, it was awesome. They were excellent,” said Dale.

“We like the Sundre hospital because we know a lot of people who work there, and it’s a lot more personal. The staff there, they’re fantastic,” he said, recommending any expecting parents to seriously consider delivering at the local hospital.

Having named their first two sons in honour of grandparents, the couple decided to continue the tradition of older-style names that are not as commonly used anymore, said Dale.

“We wanted something unique and older,” he said.

Operating Black Gold Rush Industries alongside his father Chris, Dale has since he can remember always known and been fond of Brittney, who is a dental hygienist at the Sundre Dental Clinic.

“We both grew up in Sundre,” he said, adding they were in the same grade at school and grew up living just a few kilometres apart.

The fairy tale high school sweethearts started dating in Grade 11, and only ever left the community to complete their post-secondary education in Red Deer and Edmonton before coming back to Sundre and eventually settling in their home a couple of years ago.

As Wallace was the Sundre Hospital and Care Centre’s New Year’s baby for 2020, his parents were pleasantly surprised to be personally presented with three, $335 gift certificates to IGA, Sundre Community Drug Mart as well as the Sundre Family Pharmacy — for a total of $1,005 — by Vi Ellithorpe, president of the Sundre Hospital Ladies Auxiliary.

“His due date was (January) the 10th, so unless he came very early, we never thought we’d have a chance,” said Brittney.

“I’ve been doing this for a lot of years,” said Ellithorpe, adding very few Sundre New Year’s babies tend to be born exactly on January 1.

“The odd one, but not too many,” she said, adding there have been instances when the New Year’s baby did not arrive until February.

Expressing gratitude, Brittney said the certificates were “a very generous gift. We weren’t expecting that,” she said, adding the gift cards will come in handy covering the cost of items like diapers and wipes.