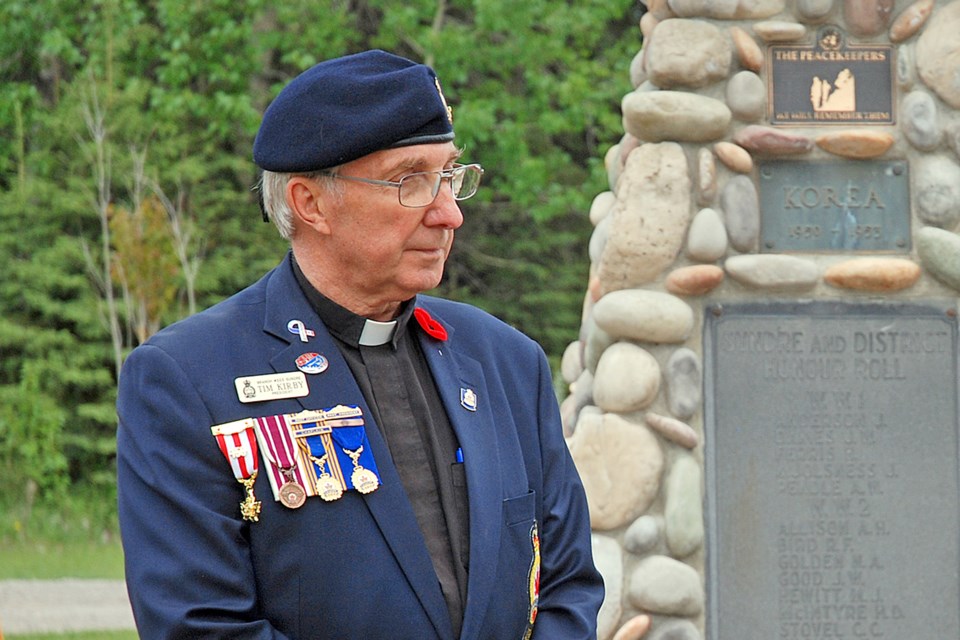 Tim Kirby, pictured here last June at the Veterans’ Homecoming Park cenotaph during a special ceremony recognizing the 75th anniversary of the D-Day landings in Normandy, has stepped down as the Royal Canadian Legion Sundre Branch #223 president, but will continue to carry with him the many memories he made over his years of service to the legion. File photo

About 40 people attended the gathering at the legion hall on Saturday, Jan. 18. Chris Ferguson, who was sworn in as the new president, said the meeting went very well.

When asked whether the Sundre Royal Canadian Legion had any goals or specific plans for the upcoming year, Ferguson, who once previously served as president for several years, said, “We have not met as an executive yet.”

The new group’s first meeting is in February, at which point she said ideas and future directions are going to be discussed in more detail.

“We hope to be a viable entity within the community,” she said, adding that maintaining enough helping hands tends to be an ongoing challenge.

“We are always looking for new members,” she said, adding anyone who’s interested in volunteering with the legion is welcome to contact her by calling 403-638-3707.

Former president and chaplain Tim Kirby, who stepped down from the executive after many years, reflected on the legion’s future, as well as his past experiences.

“All that has been achieved by the legion is from those who came before, and is blended with the dynamics of what’s taking place today,” he said.

“In this, it’s necessary for past leadership to step aside so the incoming can achieve their best. The branch is in good shape and it’s time to pass the torch to those who follow.”

Drawing from the metaphor of someone learning to ride a bike, Kirby said the time always inevitably comes when the ones providing guidance must have the confidence to let go and allow the person to proceed, “even if it means falling off, skinning knees and knuckles. It’s in these times of struggle there comes knowledge and experience with learned abilities, that they become efficient in riding a bike. Likewise, it’s when the responsibility to achieve is accepted, that our greatest for an organization is achieved.”

Contributing to the legion’s efforts — both in Sundre and throughout the country — to remembering Canada’s fallen has been an honour, he said. His fondest memories are of the times spent talking with military personnel and veterans, attentively listening to their tales as well as accomplishments, and being inspired by their ability to find levity even in the face of great hardship and conflict.

Kirby also shared a sense of satisfaction of having been a part of a campaign to ensure all veterans in medical facilities and housing are cared for in an honourable way, as well as profound humility from walking with families who lost a loved one in service to others, juxtaposed by the joy of celebrating weddings of legion members.

And of course he said he will also always carry with him the memories of Sundre’s parades, raising the Canadian flag for special ceremonies at the Sundre and District Museum, and presiding over numerous annual Remembrance Day services in the community.

Looking ahead, Kirby, who expressed an affinity for writing and has published a number of books, plans to continue exploring his potential.

“The written word is a powerful influence on all who read and hear,” he said.

As time allows, he also looks forward to travelling across the country to behold the great beauty to be found in Canada, as well as fishing and camping along the way.

“It’s been an honour to be part of the Royal Canadian Legion for the past 20-some years,” he said, expressing well wishes for the Sundre branch’s success in the coming years.