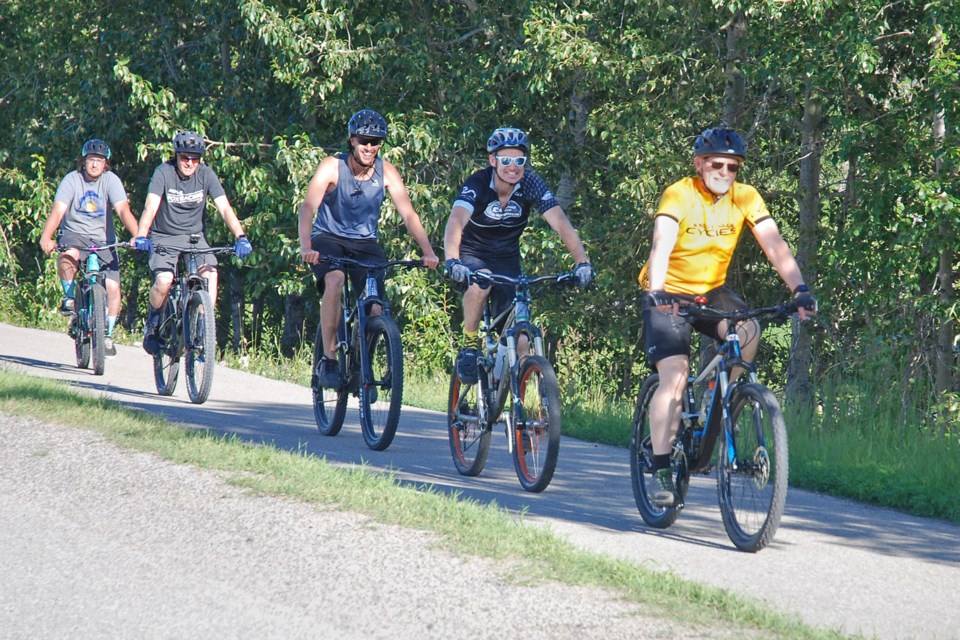 The weekly Sundre Bike n' Ski Club ride usually draws out anywhere from a handful to upwards of 20 cyclists who venture out on the local trail network from Snake Hill to the Red Deer River and Bearberry Creek. Last Tuesday evening's ride was the first held in a couple of weeks as a result of recent rains. Simon Ducatel/MVP Staff

SUNDRE — The COVID-19 pandemic did not slow down members of a local organization who consider the local network of natural trails to be a critical asset in maintaining physical and mental health.

“None of our lives have changed hardly at all since the pandemic, because we continue to go out there,” said Paul Shippy, co-chair and co-founder of the Sundre Bike n’ Ski Club.

“One of the things about us is that we all do things that keep us healthy…when in doubt, you can at least go and ride your bike,” Shippy said last week during a phone interview when asked how the members fared through the shutdown that started in March.

“It’s just shown us that when all else fails, there’s still the outdoors,” he said.

“We were still fat biking, still mountain biking…and we’re able to do all those things while still physically distancing. I would say that we have been mentally healthier because of these activities,” he added.

Extending an invitation to anyone who’s inclined to learn more about the club, Shippy encourages people to contact the group by email at sundrebikenski@gmail.com. Alternatively, visit the organization’s website, sundrebikenski.yolasite.com, or even consider dropping by the Sundre Aquaplex parking lot Tuesday evenings just before 7 p.m.

“If you connect to the club and the things we do, you might find yourself feeling good too,” said Shippy.

“Come ride with us and see what it’s like. You can have good days most days.”

Contacting the club in advance might be advisable, however, as recent rains has resulted in several weekly rides being cancelled. Last Tuesday’s group ride — which are usually attended by anywhere between a few to upwards of 20 people — was the first in a couple of weeks, said Bryan McBain, an active club volunteer.

“It’s been kind of monsoon season!” said McBain, adding turnout is, “really variable depending on people’s summer plans and how the weather’s looking.”

Club volunteers were busy prior to the pandemic setting cross-country ski tracks, and have since been doing what they can to keep an eye on changes to the nature trails along the Bearberry Creek and Red Deer River, some of which were substantially eroded over the last season, he said.

“The river has taken over some of the trails, so there’s always work with the town to reroute trails that either get taken away by the river, or become too flooded. We coordinate with the town when we see a reroute that needs to happen,” he said.

“That doesn’t mean that everybody else does, though. There are some people in the community that when they see a need, they’ll just go ahead and do it. We make sure that we talk to the town first, and then we come up with a plan. But sometimes, it happens that when we go to do the reroute, it’s already been rerouted.”

The club prefers to follow parameters and protocols, and furthermore has insurance and safety guidelines to protect not only the volunteers but also the municipality, he said.

“Through our club, there’s liability coverage.”

Shippy said work done by random members of the community can sometimes — but not always — be helpful, and added, “We would prefer that people volunteer for our club so that we have proper permission, and they’re insured (in case someone gets hurt making a path).”

With a limited number of volunteers, Shippy said the club does the best it can to keep up with trail maintenance, which is a challenging, on-going effort, especially with such a wet season that provides favourable conditions for foliage to quickly grow and encroach on some paths.

“The trails are in decent shape when we’re able to get at them,” he said, adding most remain navigable, albeit perhaps not as clear as some might like.

Shippy hailed the tireless efforts of McBain, who is the volunteer primarily active, not only doing winter track setting and summer trail maintenance but also submitting grant proposals, as well as coordinating with the municipality’s administration.

“He makes the time to do all this stuff.”

Following the successful application for a Shell Legacy Grant submitted by McBain, which earned the club $15,000, Shippy said the funds will be used to obtain new equipment — namely a Ginzugroomer, which is a new cross-cross country ski track setting trail groomer that is more user friendly.

“That will allow us to more efficiently set cross-country ski track, and probably better track. We’re also looking at buying an implement that’s going to pull it,” he said, adding the new acquisitions will benefit winter programs such as the Jack Rabbits cross-country ski classes for youth and adolescents.

“Hopefully, we can get it before the snow flies,” said McBain about the new groomer. He praised Shari Ledahl, the head ski instructor, for sharing pictures of the ski program online, which makes a more compelling case when applying for grants.

“Shari posts pictures of the smiling, rosy-cheeked children threshing through the bush on cross-country skis. Evaluators see that and go ‘Oh my gosh, we gotta get those people money!’” said McBain.

Shippy said important partnerships that facilitate the club’s efforts include the Sundre Rodeo and Race Association, as well as Chinook’s Edge School Division. Additionally, the club formed a relationship with Wheeler’s Bicycle Repair from Red Deer, which has now come to Sundre twice to offer residents — not just club members — tune-ups and repairs.

“That was another good partnership that was just established recently,” Shippy said.

There’s more to the club than maintaining trails and going on rides. Shippy said members also endeavour to offer directional assistance and information about the trail network.

People sometimes get disoriented and a little lost, especially on Snake Hill where “a person can get quite turned around,” he said, adding consistent feedback indicates there is insufficient wayfinding signage.

“The town is looking at putting signage on there, and we’ll support them as they need.”

The club also aims to occasionally offer guided trail rides to bring people into the community and “show them trails from our perspectives — show them the most efficient way to get the most kilometres in the funnest fashion…that’s what we enjoy doing, is riding and sharing the trails.”

However, as a result of the pandemic, efforts to actively promote Sundre as a destination have been ramped down, he said.

“We’re a little leery of inviting people in from other places. I don’t think it’s something that the community wants (at this time).”

Fond of nature with a profound respect and appreciation for the outdoors, Shippy said club members also act as “kind of watchdogs for the natural areas of the community, because we’re out in them all the time.”

So when youth and adolescents party in certain places, volunteers aren’t shy to approach and “encourage them to clean up their mess, and to not break glass, and to establish that connection so that there’s a little bit of accountability. I think a lot of people avoid those situations, but we don’t.

“That’s important, because some people take advantage of these natural areas. We’re trying to meet them and teach some values and encourage them to act responsibly,” he said.

“We love the natural areas, and so if someone else finds an area they like, odds are that we also like it. It’s not like we don’t want them to be there — we do. We love it when people are in beautiful areas. We just hope that they behave responsibility.”