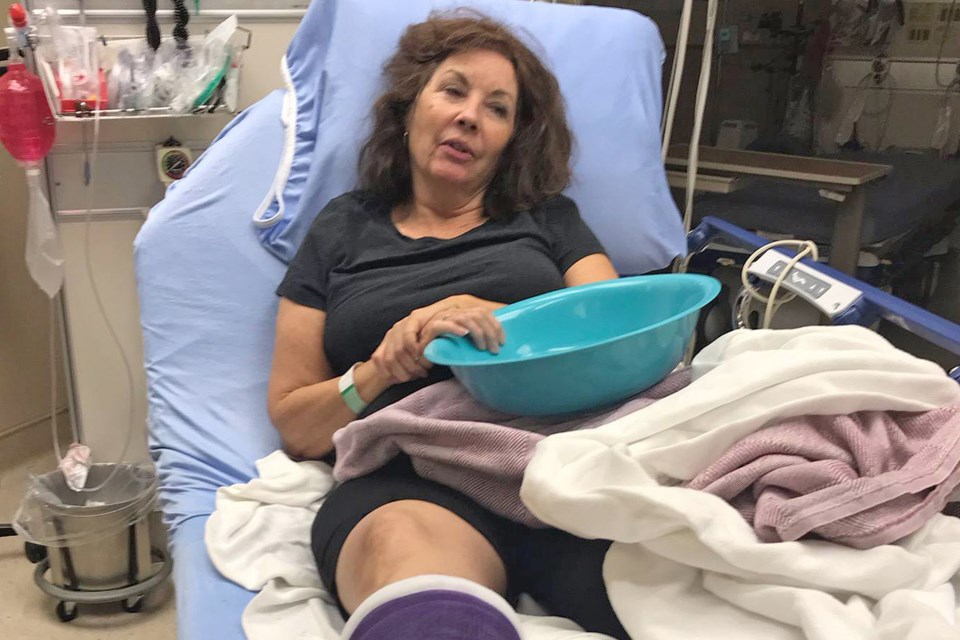 Judy Nelson, who despite the circumstances remains in good spirits, received emergency surgery to her right leg and expects her recovery to last about eight weeks. Photo submitted

SUNDRE - An area resident who was recently airlifted from Lake Louise after slipping and breaking her right leg seemed to remain in good spirits as she recounted the tale of her rescue.

Despite having been temporarily unable to walk and bedridden on her road to recovery, Judy Nelson, who lives near Westward Ho, was cheerful last week discussing her misadventure in the mountains.

“I’m not used to having to sit tight!” she said with a laugh.

Her Oct. 19 excursion up to Little Beehive at Lake Louise with friend Amy Phillippo turned disastrous when Nelson slipped and fell about halfway back down.

A roughly knee-deep accumulation of snow hid the glare of ice underneath as the pair descended, she said. After passing Mirror Lake, Nelson’s right foot turned backwards as she slipped, her knee twisting in the opposite direction and the weight of her body falling on top.

“There was an audible crack of bones fracturing,” she said.

“I’ve never felt pain like this before — it was pretty excruciating.”

The sun had just passed overhead, and with the cold setting in and not being able to move, she became concerned that shock and hypothermia could set in.

“All we were thinking about was getting out of there before dark.”

Fortunately, Phillippo -- a warrant officer with the British Armed Forces currently stationed for several months at Canadian Forces Base Suffield -- had a wealth of experience to draw from, and she packed her friend’s wounded leg in snow and kept her warm.

The pair also received additional help from other hikers, some of whom offered their coats.

“There were a lot of strangers with a lot of good intentions. That was amazing to me,” she said, adding people parted with coats, a survival foil blanket, and even some ibuprofen, “but that didn’t do a thing!”

One of the Good Samaritans was Paul Fisher, an off-duty Calgary Police Service officer from Okotoks, who with Maddy Kuipers, a new Chateau Lake Louise employee, kept the stricken hiker and her friend company for about an hour and a half until a rescue helicopter arrived.

“I was telling stupid jokes to her to make her laugh and keep her awake,” Fisher, who was also hiking back down at the time, recalled during a phone interview last week.

“It was extremely cold,” said Fisher, adding he was nevertheless committed to staying until Nelson was safely flown out.

Although Fisher said he can typically endure fairly frigid weather, he said the cold started to seep through and he found himself occasionally jogging in place to keep warm. It was the kind of situation, he said, in which one needed to place themselves in an uncomfortable position for the benefit of someone else.

“I’d do it a hundred times over again,” he said.

The helicopter crew first hovered overhead to check the potential for an avalanche and determine the most suitable spot to lift her out before heading out to come up with a game plan, she said.

“They didn’t have anywhere to land,” said Nelson.

“I was terrified they wouldn’t come back!”

But when the chopper returned, there were cheers as two responders rappelled from the helicopter, said Nelson.

A couple of female hikers, one from Australia and another from Germany, had also stopped to lend a hand, said Fisher, who added there was a team effort involved.

“Once we got her into the harness, six of us carried her 50 feet or so up to a clearing where they got ready and latched her up and pulled her up,” he said.

Nelson was assessed before being loaded onto the stretcher and airlifted to a nearby ground ambulance that transported her to the hospital in Banff. Her leg was placed in a temporary cast before she was released and Phillippo then drove her to the Red Deer Regional Hospital Centre for an emergency surgery.

Having never before experienced anything like it, Nelson described the airlift as “peaceful, because all I felt was the sky. It was beautiful.”

Additionally, the ride was surprisingly smooth and gentle, she said.

“I didn’t feel any movement.”

Now convalescing at home, Nelson, a health-care aide who works at the Mountain View Seniors' Housing facility, expects her recovery could take as long as eight weeks.

“It was a beautiful hike,” she said.

“It was just too bad it had to end this way.”

Although they were dressed for the weather and otherwise well prepared, Nelson said she learned a valuable lesson, and wasted no time ordering crampons — a traction device that fits on footwear to improve mobility on slippery surfaces.

“When I got home, I ordered some from Amazon,” she said.

“They came in yesterday…they’re staying in my car!”

She encourages others who are considering going out for a hike in winter conditions to do the same.

The rescue personnel told Nelson she was the seventh person in 10 days to require an emergency airlift.

“You always think it’ll never happen to you,” she said.

The trails, she added, are a popular tourist attraction and remain open, but should have signs cautioning people to hike at their own risk and to be sure to have the proper equipment.

Fisher echoed similar sentiments and also recommends avoiding at all costs going out alone. And while many people don’t consider trekking poles to be necessary, the accessories provide additional confidence in “being sure of foot,” making “a hard hike a little bit easier,” he said.

With the proper precautions, he said, “Winter hiking is an awesome experience.”

Nelson and Phillippo expressed their appreciation to Lake Louise and Banff first responders, emergency services, doctors and nurses as well as Kuipers and Fisher, who were strangers but are now friends.

“We’ll be staying in touch for sure,” said Fisher, who before too long hopes to plan a trip to Sundre to visit Nelson.

“She’s so friendly and outgoing and personable.”

Youth entries up at Sundre's annual fish and game measuring night
Feb 15, 2020 2:20 PM
Comments
We welcome your feedback and encourage you to share your thoughts on this story. We ask that you be respectful of others and their points of view, refrain from personal attacks and stay on topic. To learn about our commenting policies and how we moderate, please read our Community Guidelines.