Town of Penhold eyes new COVID round of layoffs 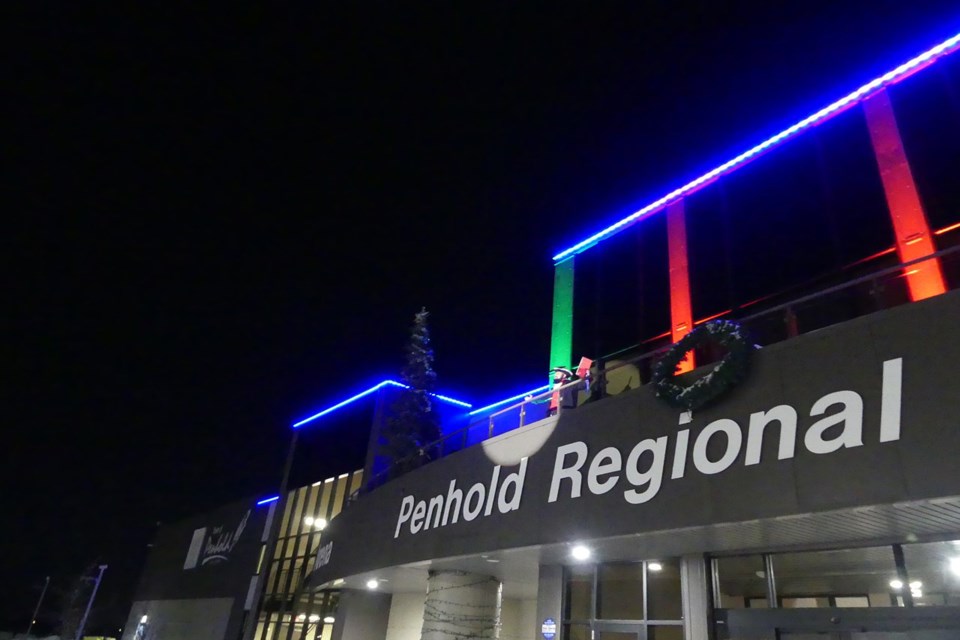 The Penhold Regional Multiplex was lit up colourfully last month as the town began its revised and extended Community Christmas activities. Despite the strict new COVID measures announced recently by the province, the outdoor activities have continued. Submitted photo

PENHOLD – The town is looking to lay off a third of its municipal workforce following last week’s new provincial COVID-19 restrictions and guidelines.

The town has about 50 employees. During the first round back in March the town laid off 17 employees. Mayor Mike Yargeau said the town is looking at a similar number for the second shutdown.

“They all came back,” said Yargeau of the first round of layoffs. “Hopefully they do again.”

Yargeau said the final decision about layoffs for this current COVID shutdown will be made after council is briefed by administration at its Dec. 14th regular council meeting.

“It falls under an administrative decision,” said Yargeau. “They definitely look to council for some guidance in that but at the end of the day it’s an organizational decision.

“I mean it’s gut wrenching,” said Yargeau of any organization that has to consider layoffs.

The first lockdown was initiated last March for two months.

Yargeau said limited arena and multiplex activities announced in early December, such as family skates and gymnasium use, along with individual workouts at the Fitness Centre, are no longer happening, and the facility won’t be reopened until at least mid-January.

“Those are going to be cancelled. Tomorrow (Dec. 12) will be the last day,” said Yargeau. “The entire multiplex facility is being closed to the public.”

Yargeau said that also includes the Penhold Public Library, which will be closed until at least mid-January.

He said there will be limited staffing at the town office, while other employees are transitioning to work at home. Town council meetings are going back to being held virtually.

All planned events and meetings at the Memorial Hall have also been cancelled.

“Essentially it (town) is going to look and feel very similar to what it was the first time.”

In the meantime, Penholders are still moving forward to have the best and most joyous Christmas holiday possible. They will still be able to participate in the revised Community Christmas that features different outdoor activities held every week until Dec. 18; all of them designed to be COVID friendly and safe.

“There are a lot of people just unsure. I think every family is grappling with a decision now on what they are going to do about Christmas,” said Yargeau, adding his own family has decided to do a video conference or a “Zoom happy hour thing.
“I think families all around Penhold are having those same discussions right now. It’s tough.”