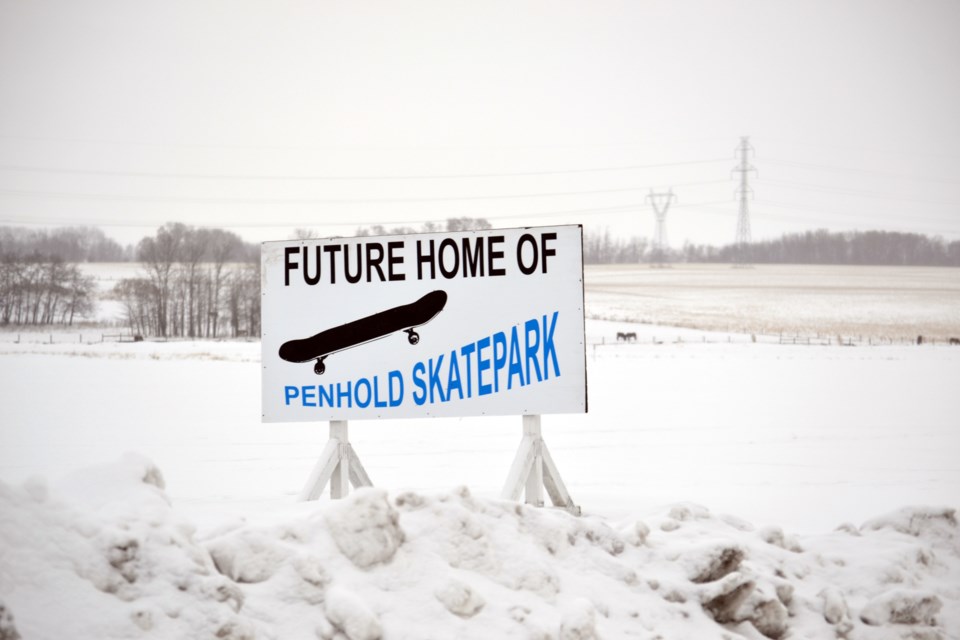 The future site of the Penhold Skatepark near the town's multiplex. The project's committee has now turned to a plan that will make the facility smaller but be built sooner. File photo/MVP Staff

PENHOLD – There are changes coming for the town’s proposed new skatepark.

After years of planning and fundraising, the Penhold Skatepark Committee recently decided on changes to help the project move forward and become a reality.

“We’ve lowered our price. Depending how much money we raise, that will (determine) how big the facility is,” said Brenda Mahoney, skatepark committee chair. “It was at $600,000 to $650,000 and we’ve lowered it to $300,000, but I’m hoping we can raise more than that so we can add more pieces to the skatepark.

“We want to get something built sooner rather than later and this may be the best way to do it,” she added. “It’s not costing any taxpayer money (from Penhold residents).”

The skatepark committee recently discussed the cost cutting measure, noted Mahoney, in an attempt to make the project more feasible.

“It’s been so difficult to raise funds and it’s taken a long time, so we’re going to do a little bit of alterations (with our proposal) so that it is different,” she said, noting the changes may include a reduction in the skatepark’s size and features or elements it may contain.

“We’d really like to have it so the kids can get in there and start using it now,“ said Mahoney. “This has taken a long time.”

So far, the committee has raised more than $130,000, she said, adding they hope to get a matching provincial Community Facility Enhancement Program (CFEP) grant in the new year.

The Town of Penhold has donated the land for the skatepark project and several local businesses have shown their support, said Mahoney.

Antler Hill Veterinary Services in Penhold is one of them.

This year, the animal hospital's Pet Photos with Santa initiative, taking place on Nov. 30, is fundraising for the Penhold Skatepark.

“The success of any community can probably be tied to the engagement of the youth,” said Dr. Andrew Ritson-Bennett. “It’s those facilities and those programs that provide opportunities for kids to make good decisions and learn to be good citizens.

“Having a facility like this (skatepark) will hopefully help the community grow and maintain its vibrancy and be a strong, growing community in Central Alberta,” he added.

Mahoney said she is thankful for their fundraising efforts.

“I was thrilled when they asked us. I think it’s a fantastic idea,” she said. “There’s a lot of small businesses that have been supportive from the get-go. It’s nice to have Antler Hill on board.

“We are trying desperately to raise enough funds to build it next summer,” said Mahoney. “Every little bit helps."

Penhold Fire Department suspends popular curbside event visits
May 1, 2020 2:30 PM
Comments
We welcome your feedback and encourage you to share your thoughts. We ask that you be respectful of others and their points of view, refrain from personal attacks and stay on topic. To learn about our commenting policies and how we moderate, please read our Community Guidelines.