Cause of Friday's blaze at Penhold Estates under investigation
0
Jan 26, 2020 2:37 PM By: Johnnie Bachusky 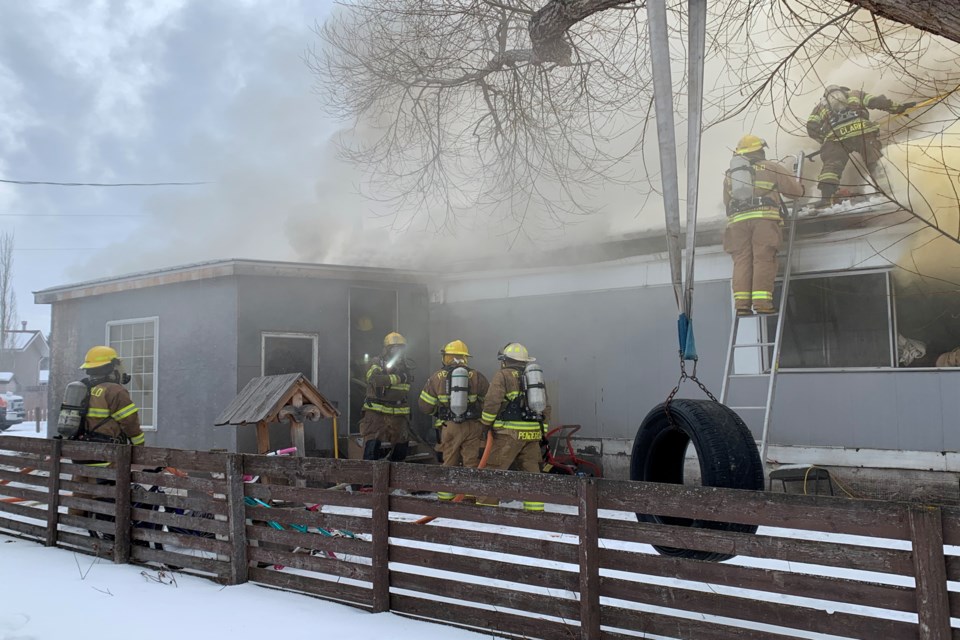 Firefighters battle a blaze at a residence in Penhold Estates on Friday afternoon. Photo courtesy of Penhold Fire Department

PENHOLD – A local residence sustained tens of thousands of dollars in damage after a fire broke out on Friday afternoon at Penhold Estates.

It took firefighters from Penhold and Innisfail six hours to have the fire under control.

Penhold fire Chief Jim Pendergast said in a news release his fire department crews received the first call at about 2 p.m. on Jan. 24 that there was a structure fire in Penhold Estates.

“Engine 1 arrived on scene to find heavy smoke coming from the building and flames running up the side being fed by the gas line,” said acting fire Lieut. Bailey McKay. “We sent a crew in right away and they knocked down the fire in the rear.”

Penhold Deputy Fire Chief Sean Pendergast said it was a challenging blaze for firefighters to get at.

“There was a metal roof with a double shingle roof over top and the fire was in the space between so access was a problem,” said the deputy chief. “The fire was also underneath the trailer running along between the beams.

He added conditions were “very hot” with the hallway over top of three firefighters “flashing” over. The deputy chief said firefighters were forced to cut several holes in the roof for ventilation and access.

Fire chief Pendergast noted the hazardous challenges facing his crews and added they “did a great job” containing the fire to a single unit.

“It was very hard work and taxed the firefighters both mentally and physically,” said the fire chief. “The park does not have a hydrant so we had to lay our hose from the hydrant 1,200 feet away and use an engine in the middle to boost the pressure.”

One Penhold firefighter was transported to hospital by EMS and later released with a non-related medical issue, said the fire chief, who added the cause of the blaze is still being investigated. He noted the renters and the owner of the building may not have had insurance, and that renovations were being made at the time of the fire.

Fair Deal Panel makes a stop in Penhold
Feb 12, 2020 6:30 AM
Comments
We welcome your feedback and encourage you to share your thoughts on this story. We ask that you be respectful of others and their points of view, refrain from personal attacks and stay on topic. To learn about our commenting policies and how we moderate, please read our Community Guidelines.