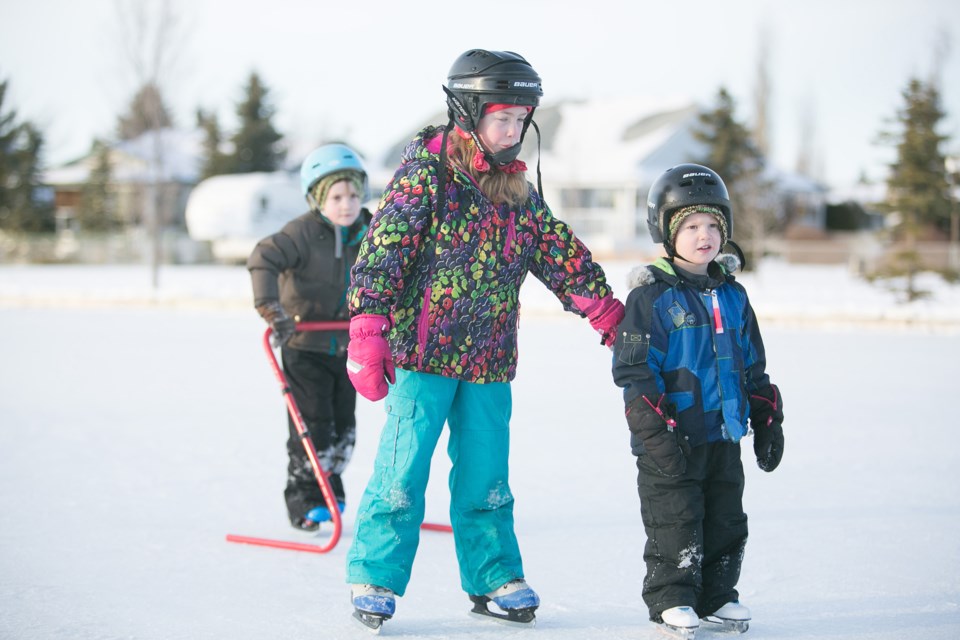 Children skate together in 2018 at the outdoor rink next to the Innisfail Arena. While Penhold and Innisfail have no plans this winter for indoor public skating due to the COVID-19 pandemic, both communities are hoping their outdoor rinks can be open. File photo/MVP Staff

PENHOLD – For the first time in the 10-year history of the Penhold Regional Multiplex there will be no wintertime public skating.

Instead, the town is introducing a new weekday drop-in family skating program.

Penhold mayor Mike Yargeau said the decision came down to how the town and its citizens would be able to follow the numerous COVID-19 rules and guidelines.

He said the town realized that having public skating would be challenging and would require more staff than the town has available in order to monitor all aspects of safety for citizens.

“People would have to pre-book their public skating. We would have to basically cover all the exits and make sure only the right number of people are on the ice at the right time, and at the end it was just decided not to go ahead with it,” said Yargeau.

“It is very popular and that is one of the reasons why we were more concerned about it. It is something we went back and forth for a long time, and for now we decided this was the safest decision for the town and facility.”

“We are still trying to provide that chance for parents to get their kids out there to skate,” said Yargeau. “It won’t be the same as the (weekend) public skates but we are trying to do something. Even with those there is pre-registration required, and a process to go through to get your spot to keep track of the numbers.”

Yargeau said there is a multiple number of times during the week that have been set aside for drop-in family skating. There is no drop-in skating on weekends. He said there is a limit of 15 adults and their children.

Yargeau emphasized the town will eventually open its outdoor rink near Jessie Duncan Elementary School, when conditions are right for flooding, likely in late November or early December.

“As for the rink shelter I think it will be open but so much could change,” Yargeau said, noting the constantly evolving status of the pandemic.

The COVID-19 crisis has also put public skating in Innisfail in jeopardy.

Ken Kowalchuk, the town’s communications coordinator, said there are no plans to proceed with public skating on the two indoor ice surfaces at the Innisfail Arena. While the blue rink has been open to user groups (minor hockey and figure skating) since last month the red rink was opened Oct. 13.

Kowalchuk also noted the town has two outdoor rinks, one located along 54th Avenue and the other at the Napoleon Lake Sports Fields, located on the grounds adjacent to the arena.

“Those facilities are not due to be flooded until temperatures are consistently below freezing,” said Kowalchuk, adding it was difficult to provide more information at this time due to evolving situation with the COVID pandemic. “When we are able to proceed with the flooding, we will review the guidelines at that time and proceed accordingly.”