Christmas season kicks off in Penhold 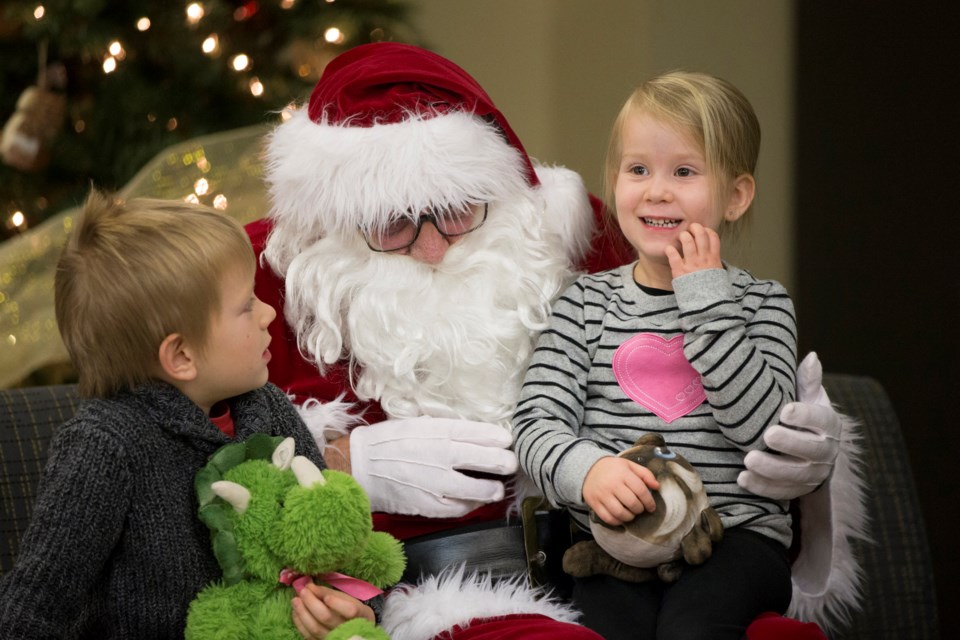 Santa Claus asks excited children what they would like for Christmas during the annual Penhold Community Christmas celebration at the town's multiplex on Nov. 22.  Photo by MVP Staff

The annual event took place at the Penhold Regional Multiplex on Nov 22.

“This has become how we kick off the holiday season for Penhold. It’s grown every year and it’s become one of our best traditions,” said Mike Yargeau, Penhold mayor. “Typically we get hundreds of kids and families out here.”

Families enjoyed a variety of Christmas activities during the evening, including horse-drawn sleigh rides, the Christmas tree lighting, face painting, a cookie walk, bouncy castles, a Christmas market, a silent auction, photos with Santa and Christmas music by the Central Alberta Chamber Players.

“It’s a great night,” said Yargeau. “We always get a big crowd and with the beautiful weather the sleigh rides will be packed.”

Town staff, councillors, and dozens of volunteers were on hand to help with the event, which also collected non-perishable food donations for the Red Deer Food Bank and new toys for the Red Deer Christmas Bureau.

“It’s a way to encourage people to spend some of their hard-earned money in town,” said Yargeau. “There’s prizes you can win and stamp cards at participating businesses.”

Sherry Kostenuk, of Red Deer's Sherry’s Kitchen, returned as a vendor at the Christmas Market for the second year.

“I love the atmosphere. The kids have a great time,” said Kostenuk. “It’s a great family event.”

Springbrook's Diana Lawrence was out with her husband and seven-month-old son Carter enjoying the event for the first time.

“It’s really cool and neat with all the local vendors here,” said Lawrence. “We are really looking forward to the pictures with Santa for our son Carter.”

The event has been a part of the Penhold community for several years, noted longtime resident and former town councillor Julia King.

“It used to be over at the old library building,” said King. “The library would have their silent auction over there and the community would have sleigh rides throughout the town and there was a Christmas tree by the fire hall.

“Having everything on one night is great; families can plan for that,” said King. “It’s the place to be.”

Penhold Fire Department suspends popular curbside event visits
May 1, 2020 2:30 PM
Comments
We welcome your feedback and encourage you to share your thoughts. We ask that you be respectful of others and their points of view, refrain from personal attacks and stay on topic. To learn about our commenting policies and how we moderate, please read our Community Guidelines.